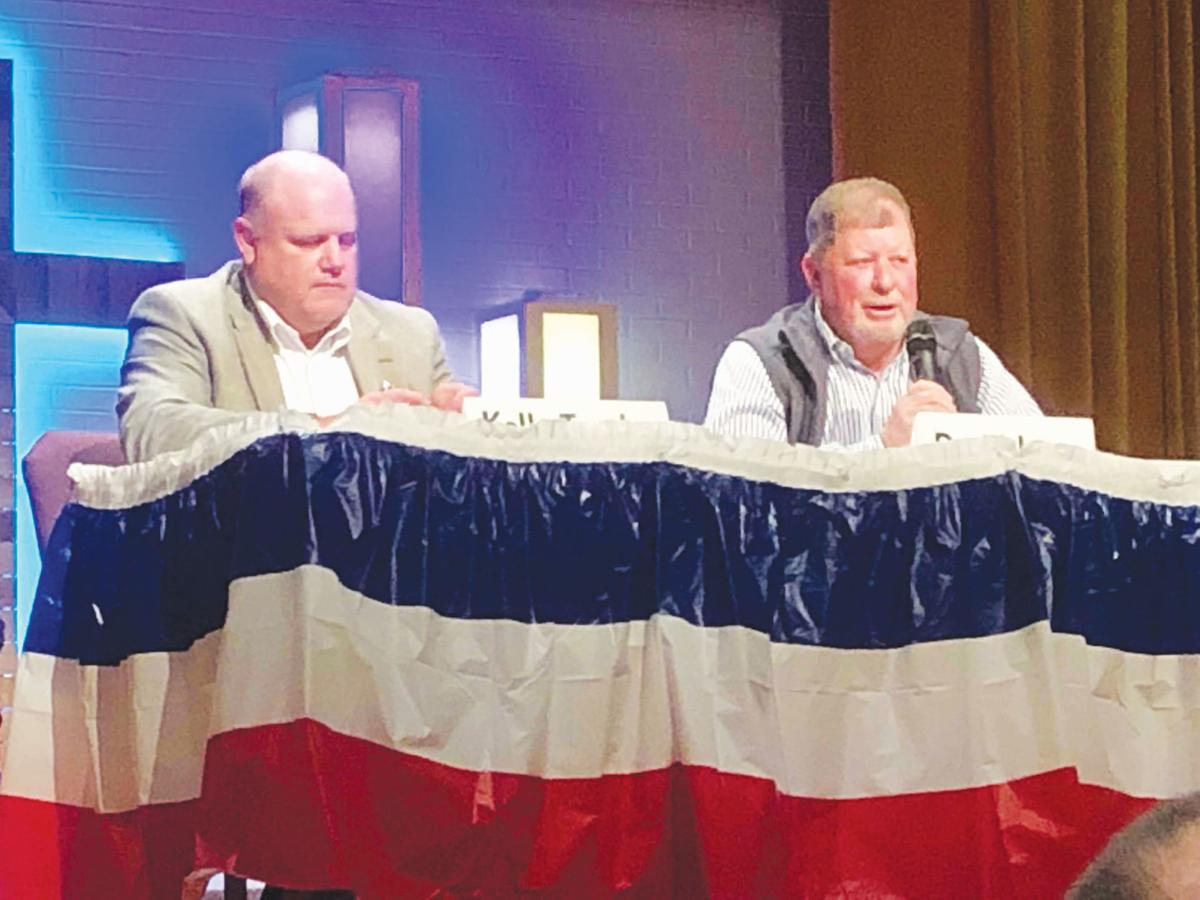 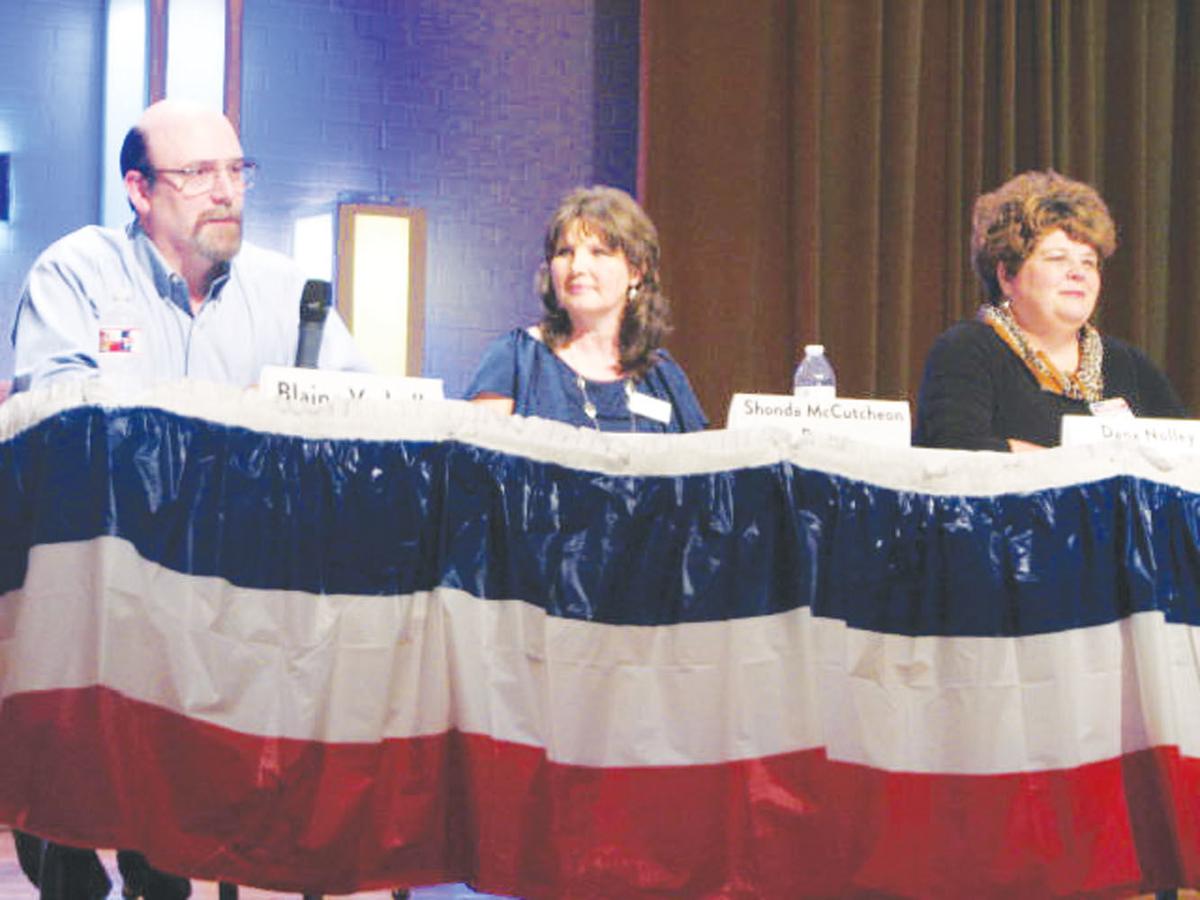 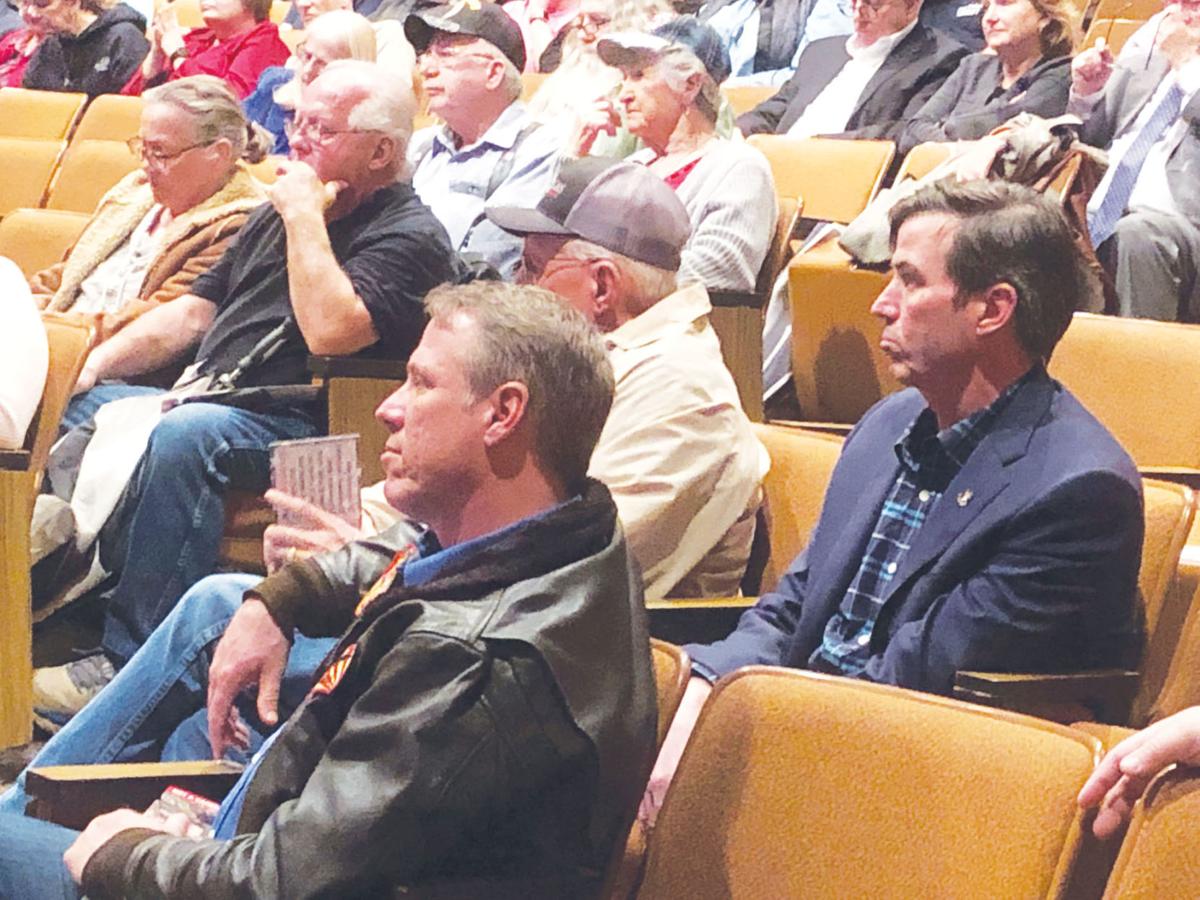 The crowd, including Congressional candidate Don Hill (far right) listen during the event.

The crowd, including Congressional candidate Don Hill (far right) listen during the event.

Ted Wheeler, spokesman for the Cherokee County Republican Executive Committee, which hosted the event, said it's estimated about 275 people attended the event.

“I thought everything went well … this was their opportunity to represent themselves before the voters. I hoped the voters learned things about the candidates so that they could make decisions based on who they believe will be best to serve our county,” he said.

While there are other candidates running for different offices in the March primary, “last night, we wanted to focus on the county's contested races, and give the candidates and opportunity to tell why they they should be the person voters select.”

The race for the Cherokee County Sheriff's seat is the largest, drawing five candidates who seek to be the successor of longtime Sheriff James Campbell, who will retire at the end of the year.

“This is the biggest election this county has faced in 25 years,” when Campbell was elected, noted candidate Brent Dickson, who currently serves as a narcotics detective with CCSO.

Others pursuing the seat include Ben Ellis, who works part time for Palestine Regional EMS and in the oilfield industry; Eric Long, a commissioned Special Ranger for the Texas Department of Public Safety; Roy Cavazoz Jr., a Rusk County Sheriff's Office investigator; and Johnathan Rhodes, an RCSO narcotics investigator.

They are all natives of Cherokee County.

Describing their collective backgrounds that include law enforcement careers from the county to the national level – even beyond – the candidates each fielded three questions focusing on qualifications and expertise in managing the CCSO $5.3 million annual budget, what they felt were the most pressing crime issues facing the county and how to address them, and how to maintain high morale and personnel retention with the current CCSO staff.

All five candidates called narcotics – and the issues related to it – the county's most pressing crime.

“The biggest crimes in Cherokee County are narcotics … they relate to every crime in this county, and it's a leading cause in our CPS cases,” Dickson said. “Narcotics is the leading cause of burglaries, assault, murders and any other crime you can think of in this county. The best way I know how to fight crime … is to put boots on the ground, men and women working towards one goal: To put bad men and women in jail.”

Cavazoz suggested the best way to address the issue is to proactively patrol by ensuring that four deputies patrol the county's road per shift, focusing on high-crime areas.

He also proposed to work hand-in-hand with CPS who go out to residences on welfare checks. “One of the things we do is to send investigators out with CPS workers,” he said. “If we're getting drugs endangering children, seeing those types intakes, what better than to send out a narcotics detective out there with that investigator for safety, to help conduct the investigation? If you are invited into the house, you're going to spot something (indicating the presence of illegal narcotics).”

Rhodes proposed to immediately implement programs to train personnel that better equip them to investigate those crimes, adding that the department also would utilize available grants “and proactive, professional investigative procedures, crimes against property will be looked into (and) a zero tolerance policy will be placed for those who possess an illegal narcotics here.”

Meanwhile, Long supported additional training for officers to discern the problems before they arise, and to partner with the public “in how y'all can help us, because you're the eyes and ears of the community … we want to be a proactive department.”

“People have asked me, 'What are you going to do about the drug problem?' We're going to go after the source, not just the people who are using them,” Ellis said, also proposing to partner with community groups and churches to offer a faith-based rehab program to help abusers who otherwise may continue to “ruin their life day after day. We would work with the D.A. and the judges to break that cycle (of abuse).”

They each also spoke of creating and maintaining budgets with a reserve dedicated to upgraded equipment, vowing to work with county leaders to ensure their officers were supplied with the best.

In maintaining morale and retention with the current staff, the men discussed establishing more worker-friendly schedules that wouldn't overtax deputies; additional training that would allow for personal and professional advancement; and procuring equipment that would allow them to perform their duties more efficiently.

“Any law enforcement officer will tell you that their job is not a job, it's a calling,” Rhodes said, adding that providing an environment that's supportive of those officers “is productive and feels like home for the employees.”

Potter, who has been with the tax office since 1994, stressed that her professional qualifications and various duties with the county has allowed her to assume the duties of department head Linda Little in her absence. Additionally, she has completed and maintained her collector certification – receiving her license – has completed, needed classes, and has kept her Continuing Education Units updated.

She proposed to reduce costs by finding educational classes closer to home as well as seek out online offerings; cross-train employees, allowing them to do multiple jobs and pitch more online registration for vehicle and property taxes.

Verhelle, who stressed his background in business management, finances and other related subjects has allowed him to implement his knowledge in various ways.

While he admitted “I have no personal knowledge of the financial operation of the tax office, but I assure you I have conservative values and take a conservative approach in daily operations and if there's any dollars to be saved, I'll find them.

“Business management is what I do on a daily basis,” he said. “$562,000 is a lot of money, but it's small compared to some of the things I've learned over the years (operating a business). I feel that honesty and integrity are essential values one must possess when gaining trust of our people with their money.”

Chancey cited her experience in helping open an assisted living facility in Jacksonville, “from construction, from ground up to the grand opening. As administrator of that facility, one of my responsibilities was to maintain its budget.”

Her duties also entailed dealing with contracts and marketing, “and I did that very well, and I enjoyed it,” she said, also citing her accounting and other related experience.

To help keep costs down, “I will continue to push for new technology that will drive the costs down; as Shonda said, cross-train everyone in the tax office, where everyone knows everything about everything and can access it,” she said, adding that she also wanted to foster with other tax offices to be able to bring new information and programs that have been successful with them.

Incumbent Kelly Traylor and challenger David Jones, who are vying for the position, fielded questions about prioritizing a budget workload, sharing equipment and resources with other precincts to help trim budget costs across the board and about whether the position is a full-time one.

Traylor touted his experience as commissioner for the past 12 years, describing how during that time, “I've been through disasters in the county, such as fires, floods, tornadoes and even a hurricane,” dealing with FEMA officials along the way to help the county with recovery efforts.

Jones – who described himself as a self-employed cattle rancher, as well as founder of The Legacy event center in Jacksonville – cited his experience in working with budgets as part of his ventures, and reassured them that “I would spend every penny of your tax dollars on you.”

Both agreed that roads and their upkeep are the biggest issue Precinct 1 faces.

“Maintaining the roads, cleaning up the trash, and I know and we work with the sheriff's department some, but I think the roads are the main issue right now with the budget,” Jones said.

Traylor expanded on his opponent's comments, pointing out that “Cherokee County is poverty county and the tax base is very small.”

Approximately 45 percent of the budget ($392,000) is earmarked for employee salaries, benefits and insurance, leaving slightly less than half a million dollar budget to spend on the precinct's other needs, such as fuel purchase, update equipment and provide repairs, among other things.

Roads are a priority, and commissioners keep a close watch on how they are utilized and how safe they are for use, Traylor said.

They addressed topics of how they would work to unify the county's Republicans, among other questions.

Jackson is a county business owner as well as founder of non-profit organization and a head instructor at a Christian school.

“As your chairman, I will unify the party by being a strong leader and good role model for the young Republicans,” he said.

Earle, who has been active in Republican party politics in a variety of ways, said “one of the duties of the party chair is to grow the party. I have been working with key team leaders to involve 18- to 40-year-olds who are interested in forming a chapter of the Texas Young Republicans. My goal is for young people to get involved … it's necessary to have a stable community of people with conservative values who can influence others.”

Congressional candidate Don Hill, who is challenging incumbent Lance Gooden for the U.S. Congressional District 5 seat in Texas, travelled from Dallas to visit with attendees before and after the forum.

Questions were solicited by email from county residents; a set of three questions was selected for each group of candidates. Josie Fox, publisher of The Cherokeean-Herald newspaper in Rusk, served as mistress of ceremony at Tuesday's forum.

Early voting will be held Feb. 18-28 in Cherokee County.

Memorial services for George Ross Causey Jr., of Jacksonville, TX, will be scheduled for a later date in Dallas and in Jacksonville. Mr. Causey was born in Ballinger, TX, on Dec. 4, 1942, and died July 17, 2020, at Baylor Hospital - Dallas. Mr. Causey was preceded in death by his parents, Ro…