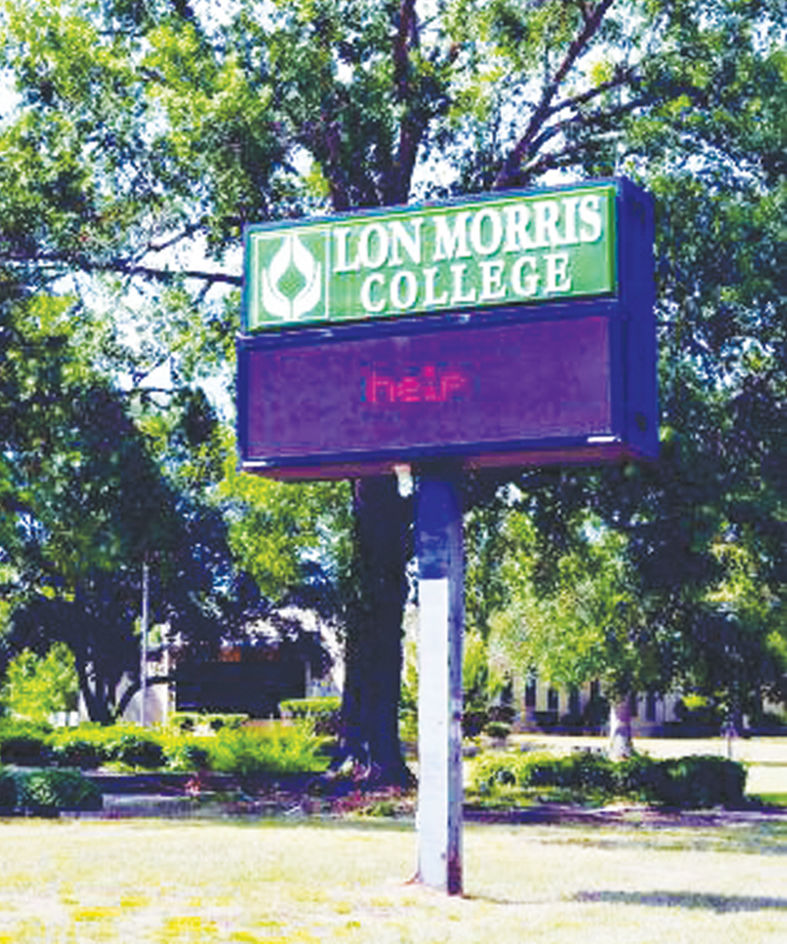 A sign at Lon Morris College asks for “help” as the college struggled with financial woes that led to its closing. 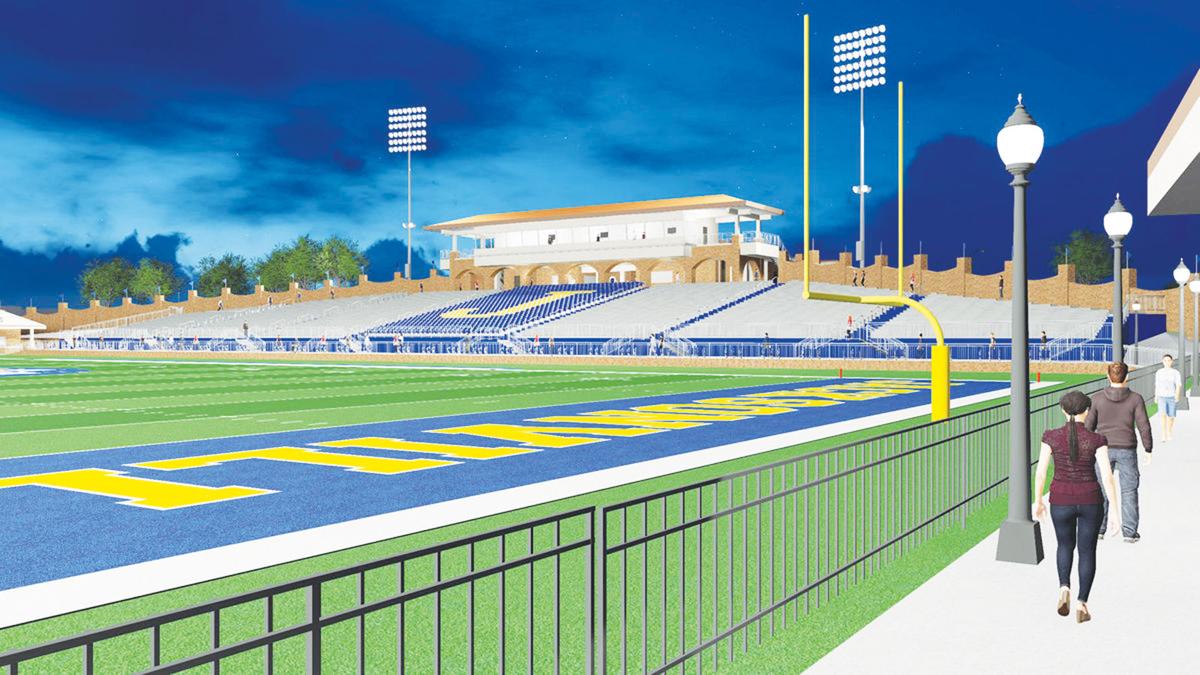 An artist’s rendering of the newly renovated Tomato Bowl is shown.

A sign at Lon Morris College asks for “help” as the college struggled with financial woes that led to its closing.

An artist’s rendering of the newly renovated Tomato Bowl is shown.

The decade was eventful in Cherokee County, as the longstanding Lon Morris College shut its doors, the historic Tomato Bowl received a multi-million dollar renovation and other news made headlines from 2010 through 2019.

The Progress staff has chosen what they believe are the Top 10 news stories of the decade. They include:

The bankruptcy of Texas' oldest junior college, Lon Morris College, was a lesson in the complex issues involved in both legal proceedings and the division of assets and property.

The LMC estate declared bankruptcy in July 2012; by the following February, a federal judge approached a formal liquidation plan.

During a subsequent Dallas auction of the college properties, Jacksonville ISD, office supply company 11 x 17 Inc. and local businessman William Adcock Jr., were awarded the high bids for a total of nearly $2.2 million.

However, despite those developments, there was nothing in the official paperwork addressing payment for the employees who worked there during the institution's final days. Frustration over time regarding the pay issue drove the former employees to meet at the First United Methodist Church to discuss how to approach the issue with Jacksonville City Attorney Joe Angle, who volunteered his time to provide guidance.

Attorneys with the Lon Morris College bankruptcy estate also filed suit against former president Dr. Miles McCall – who resigned on May 24 – and members of the former LMC board of trustees in federal court in August, alleging mismanagement that effectively destroyed the institution.

A $21 million Jacksonville ISD school bond election in May 2017 was met with overwhelming approval as residents of the district passed the proposal by a 1,020 to 265 vote. That support guaranteed renovation to the historic Tomato Bowl and expanded the local high school's growing Careers and Technology department.

The new state-of-the-art stadium features artificial playing turf, a new sound system and a dressing room for the visiting team. It also includes new stadium lights and a new press box with elevator service. Upgraded seating took the stadium's capacity from 6,000 to 8,000.

While the changes ensured the project met building code standards, the historical integrity of the Tomato Bowl remained uncompromised.

Constructed in 1939 as a federal Works Progress Administration project, Jacksonville's Tomato Bowl is a one-of-a-kind entity, constructed with native rock. In November 2017, after the last home football game for the Jacksonville High School Fightin' Indians, the Tomato Bowl was closed for a year-long renovation. A June 7 “grand re-opening” celebration featured a live concert by Jacksonville native Neal McCoy.

April 13, 2019, is a date many south Cherokee County residents – primarily those in the Alto area – have etched in their minds: That was the day their community was struck by three separate tornadoes during a span of just a few hours.

According to the National Weather Service, the storms were rated as EF-2 and EF-3 events.

Approximately 20 people were injured that day – five severely – and an unidentified woman who was critically injured when the system struck the Caddo Mounds State Historic Site subsequently died from her injuries.

Homeowners' properties and Alto ISD facilities were destroyed or damaged, and a visitors' center constructed in recent years at the Caddo Mounds site sustained heavy damage, while a replica of a historic grass hut that opened in 2018 was decimated.

East Texas became the nation's focal point in November 2016, when a Tyler girl was abducted from a Bullard church, with her remains discovered just miles away days later.

A nationwide Amber Alert was issued for 10-year-old Kayla Gomez-Orozco, who went missing the evening of Nov. 1 from the Bullard First Assembly of God Church, located on U.S. Highway 69 just inside Cherokee County.

While a Nov. 5 search initiated by local law enforcement and Dallas FBI agents drew nearly 700 volunteers, young Kayla wasn't found. However, about the same time, an independent lead developed by law enforcement resulted in the discovery of human remains matching her description inside a well located on property in neighboring Smith County.

Gustavo Zavala-Garcia – a 24-year-old Mexican national living at the Bullard property near the well – was questioned by law enforcement agents and subsequently taken into custody when a federal immigration detainer was issued for his detention.

Zavala-Garcia – related by marriage to her and believed to be the last person seen by Kayla – was charged with capital murder and held in the Smith County Jail on a $10 million bond.

On August 22, 2019, Zavala-Garcia accepted a plea deal, receiving a sentence of life in prison without the possibility of parole, according to a release from the Smith County District Attorney's Office.

Hunter, 43, was a 20-year city employee who worked his way up from the sanitation department to the city's code enforcement officer. In his spare time, he enjoyed coaching basketball and football for youth leagues. He also operated local businesses.

According to a Jacksonville police report, a 911 call about a shooting went out shortly after 4 a.m. Authorities cleared the building and contacted EMS to provide care for Hunter, who died at the scene.

A witness who allegedly saw the shooting provided a description of a suspect; hours later, Jacksonville resident Jimmy Deshawn Moseley, 24, turned himself into police in connection with the crime. He was held in the Cherokee County Jail in lieu of $250,000 bail. On Sept. 22, 2014, Moseley pleaded guilty to capital murder, and was assessed a sentence of life in prison without the possibility of parole.

In honor of the beloved citizen, the City of Jacksonville renamed its 903 Peeples St. recreation center for Hunter.

Angela Wallace, director of the Klein Animal Shelter, was arrested in January 2015 on warrants for one count each of assault, cruelty to animals and euthanasia, according to Jacksonville Police Chief Reece Daniel.

The assault charge was filed with Jacksonville Police Department, while the Cherokee County District Attorney's Office filed the cruelty to animals and euthanasia warrants. A second charge of animal cruelty later was added, with Wallace's bonds totaling $20,500.

The charges were the result of a six-month investigation based on citizen complaints, including one regarding a dog with a broken back that had not received veterinary care.

The Texas Department of State Health Services subsequently revoked the shelter's quarantine certification and entities that contracted with Klein Animal Shelter – the City of Jacksonville, Cherokee County, the City of Tyler and the City of Alto – were forced to find alternative resources for animal services.

In August 2015, Mud Creek Off Road Park officials announced on their Facebook page that a decision was made to permanently close the popular 4,100-acre park located at 3971 County Road 4209, just east of Jacksonville.

The post didn't indicate a specific reason for the shuttering of the facility, but the social media announcement noted that “it is with deep sadness and regret that we inform everyone that Mud Creek Off Road park is closed permanently. We thank you for your support the past fifteen years and will (sic) miss the friendships we have made along the way. If you have future reservations that you have paid for, please send a PM. Thank you for your understanding.”

The park – which featured approximately 125 camper hook-ups along with rolling hills, woods, marshy areas and creeks – was the home of the High Lifter Mud Nationals, a springtime event of national prominence that drew crowds in the 12-15,000 range.

Event organizers announced that Mud Nationals would continue in at a new venue.

Local residents joined utility repair crews and tree removal service personnel in an effort to return the city to a more normal state after what National Weather Service officials categorized as “straight-line” winds tore through many parts of Jacksonville and New Summerfield on May 25, 2015.

Toppled trees and downed power lines left thousands of residents without power for the better part of the week in those areas, and officials with Oncor – the company which provides energy in those areas – set up a mobile power station outside New Summerfield to provide electricity to residents.

The City of Jacksonville set up a temporary site for residents to bring storm debris, which mostly included trees. The most notable loss was that of a massive oak that grew near the Tomato Bowl. The toppled tree took out part of a rock fence constructed in the late 1930s as part of a Works Progress Administration effort in Texas.

Other community efforts called for volunteers to help clean up City Cemetery, helping to free up city employees, who focused on clearing debris from streets to keep them safely passable.

The worst drought in Texas history led to the largest-ever one-year decline in the leading cattle-state's cow herd. From the beginning of 2011, the number of cows in Texas had dropped by about 600,000, a 12 percent decline from the roughly five million cows the state had at the beginning of the year, according to the Texas AgriLife Extension Service. Cherokee County ranchers who gambled on winter rye grass to feed their hears, instead of selling the cattle off, were rewarded with an unexpected wet December.

CHEROKEE COUNTY – The remains of a decomposed female body was found Sept. 3, 2014, along US Highway 69, between Alto and Wells, but because because the rate of decomposition was so great, the remains ultimately were sent to the UNT Center For Human Identification in Denton for further testing.

The Cherokee County Sheriff's Office received a call that day of a body found in a median along the highway where a private contractor hired by the highway department had been mowing.

Grass camouflaged the body until contractors discovered it while mowing, with a straw hat and a shoe matching one worn by the woman were found nearby, in the deepest part of the median.

According to Sheriff James Campbell, the case was closed the following August, when a genetic match made with records from an Arizona prison identified the woman as Julie Ann (Wiggins) Tovar.

Campbell said contact was made with Tovar's family in the Houston area who said they had lost contact with her. Tovar was reportedly a transient and had traveled to many states, but she was last known by the family to have lived in West Texas, and prior to her death, was listed in the Galveston County Jail in April 2014.

Funeral services for Jerry Harold Byrom, age 81, of Cushing, will be held Friday, May 22, 2020, at 2 p.m. at the Boren-Conner Funeral Home in Jacksonville, with Bro. Brian Sellers officiating. Burial will follow at Tecula Cemetery. Jerry Harold Byrom was born August 30, 1938, in Aubrey, Texa…