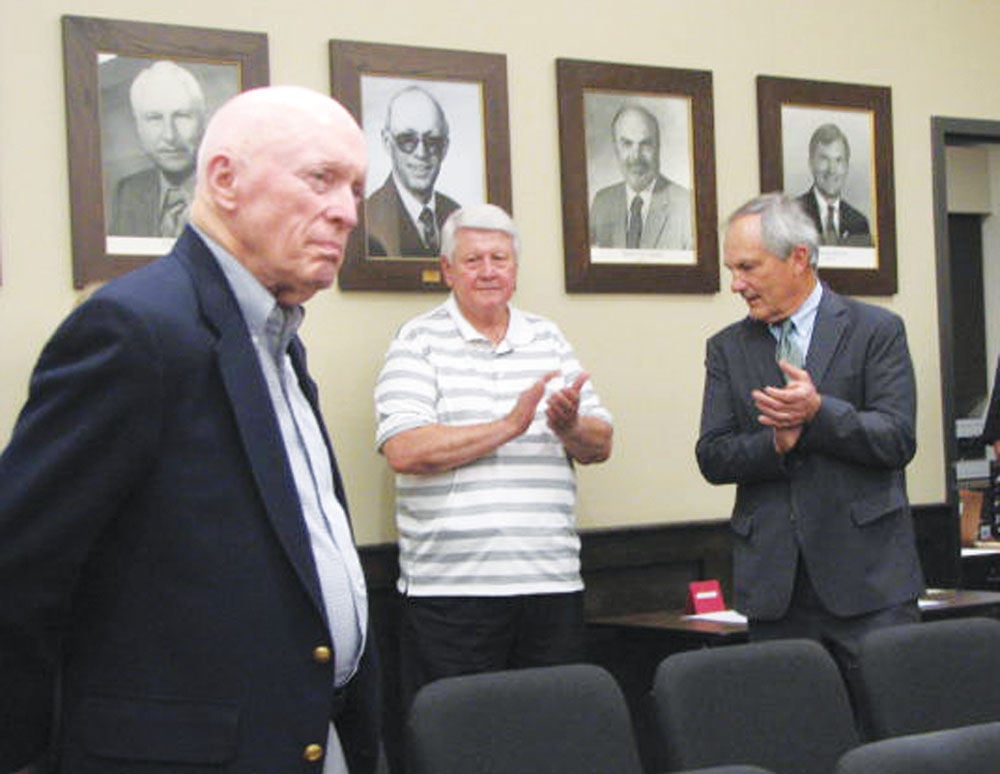 Former mayor Harry Tilley receives a round of applause during the event. 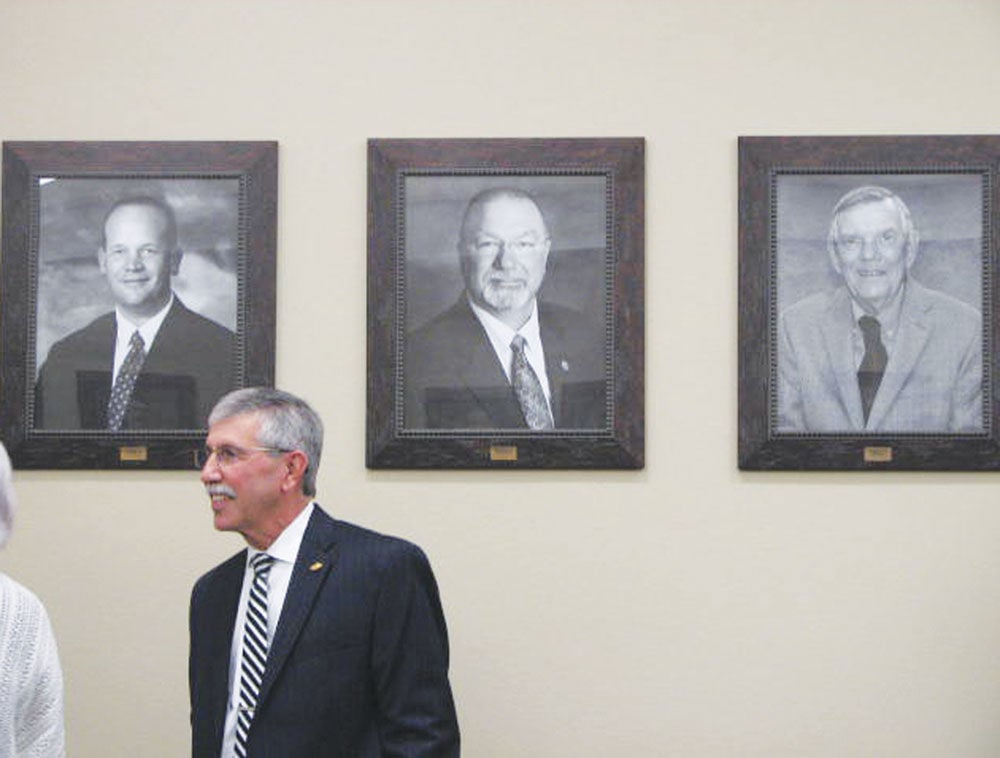 Jacksonville City Mangaer Mo Raissi visits with those attending an Open House on Tuesday to display the mayoral photos. 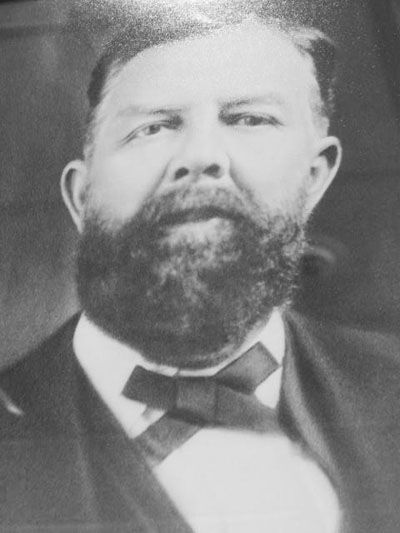 Former mayor Harry Tilley receives a round of applause during the event.

Jacksonville City Mangaer Mo Raissi visits with those attending an Open House on Tuesday to display the mayoral photos.

In early December 2016, I was contacted by the city and asked to stop by and take a look at their collection of large framed portraits of Jacksonville mayors. I was not prepared for what I saw. Lined up and leaning against the wall were images from the 1800s to present day which had been stored for many years.

I was asked if I had any suggestions for preservation techniques that could be applied. Most were in very good condition, considering the era many of the photos were made. Only a handful had water damage, one or two were deteriorating in spots and several mayoral photos were missing. We discussed steps to be taken and business archival experts to contact.

Many of the mayors I had read about as I researched topics in East Texas history. But as I examined each face carefully, I knew I wanted to know more. Due to space constraints here, I’ll highlight just a few men (no women as of yet) and I’ll mention only a portion of their accomplishments. But suffice to say, each has a story worth telling.

Old Jacksonville, located near Gum Creek, was never incorporated and was by-passed by the International Railroad in 1872. There were approximately 48 businesses operating in Old Jacksonville before it moved, almost overnight—to where the Depot was built at Wilson Street between Bolton and Main.

A charter for the present town was secured in May 1873. Soon after that N.C. Gragard was elected mayor but was ineligible to serve because he was an immigrant from Norway who had never become a naturalized citizen.

J.H. Martin was elected in his place. He was a widower, arrived from Mississippi a short time prior to the election and ran a grocery store in Block No. 120. Then three months prior to the expiration of his term, about March 1, 1875, Martin left Jacksonville and moved to Central Texas. At this point, the citizens of Jacksonville got together and decided to abandon City government. They were legally, but erroneously advised that failure of officers to qualify when elected or failure to elect any officers at election time, would automatically kill the corporation.

In March 1875, M.D. Morris was elected to finish out J. H. Martin’s short unexpired term, but with the understanding that he would not qualify, and he did not qualify, and never served a single day, as mayor. He was elected as a matter of form and as a part of a scheme to do away with city government. The following June, no election was ordered for the election of city officers, and there was no city government from June 1875 to June 1882, a period of seven years.

The above history was recorded in 1930 by Martin Luther (M L) Earle. He was a local historian, a surveyor and longtime Jacksonville mayor. His grandparents along with five children arrived in Cherokee County in 1846. They had hauled their possessions, first by boat to New Orleans then by ox-drawn wagon, walking much of the way. The Earle’s bought 320 acres near Gum Creek. They had such a successful water-powered grist mill and saw mill business that by the time the Civil War broke out they owned 4,000 acres. The area would be known as Earle’s Chapel.

Robert A. Huttash born 1912 in Kansas, moved to Jacksonville in 1940 with the Industrial Iron Works, which he managed along with his father. Upon their arrival, the Cherokee County Banner stated “that Jacksonville had taken another step forward toward becoming an industrial center.” In 1952, the business became Custom Body and Metal Co. which refurbished school buses until the state of Texas required all buses to be sent to a state penitentiary to be rebuilt by prisoner labor.

Robert A. Huttash was elected City Councilmen in 1946, and served 36 years on the council then served as Mayor for four. He was a founding member of Civilian Club, volunteer fireman 33 years and the fire station is named for him. He was a deacon of Central Baptist Church 45 years. As a lay speaker, traveling at his own expense, he did missionary work in such faraway places as Korea, Australia and Sri Lanka.

Philip Jack Pavletich, Jr. The son of an immigrant from Austria-Hungary, Philip was born 1915, in Alto. The family farmed and to make extra money, Philip picked cotton as a young boy at his great-uncle’s place in New Salem. In 1926, the family moved to the Jacksonville area. Philip worked at his father’s auto supply and service station, attended East Side Elementary, and graduated from Jacksonville High School in 1934, where he was on the football and track teams.

One night in June, Philip danced with the future 1936 Tomato Festival Queen, Frances Carolyn Wood. They married in ’39, lived in Jacksonville but also bought 100 acres in Tecula. Philip loved farming, grew sweet potatoes, tomatoes and at one time purchased 70 pairs of bobwhite quail. The hobby soon became a business and one year raised 50,000 quail.

In 1963, he was sworn in as city councilman and served 18 years. During those years he was elected mayor five times by the council. In 1977, the city charter was changed to divide the city into four districts, plus one at large district to elect the mayor. Philip ran and became the first “people-elected” mayor under the new charter. He was elected again in 1979, was also a Kiwanis Club member, a 32nd Degree Mason and Shriner.

Initially in 1915, Talley had arrived in Jacksonville at six months of age. His father, the Rev. Lewis W. Nichols would study to be a Methodist Minister at Alexander Collegiate Institute (Lon Morris College).

Son of Talley, grandson of Rev. Nichols, it is safe to say Robert comes from good stock and his mother, Ruth Bowling Nichols, was one of my favorite “spunky women." He is the product of Jacksonville public schools, played high school football and was considered an all-around great guy. Nichols was first elected to the Texas Senate in 2006.

In 2016, to celebrate the 180th Anniversary of Texas Independence, the Cherokee County Historical Commission (CCHC) and Jacksonville College invited Senator Nichols to present a program at the college. The venue was the Mary Lewis Theater, formerly the old Joe Wright Elementary School. As he took his place on stage, the Senator told the gathered crowd he felt right at home because “as a young student he had performed in a school play--on this very stage--he had been a tree!” This “home grown” boy has definitely made his mark not only in the City of Jacksonville but in the State of Texas as well.

The City of Jacksonville owes much to each man who has served as mayor and to current Mayor Dick Stone and the city council for recognizing the importance of preserving the history of Jacksonville.

At a future date, there will be a column focusing on other mayors such as T.E. Acker and R.C. Buckner. If you have stories, photos and/or biographical sketches of former mayors please contact City Manager Mo Raissi or City Secretary Greg Lowe at 903-586-3510.