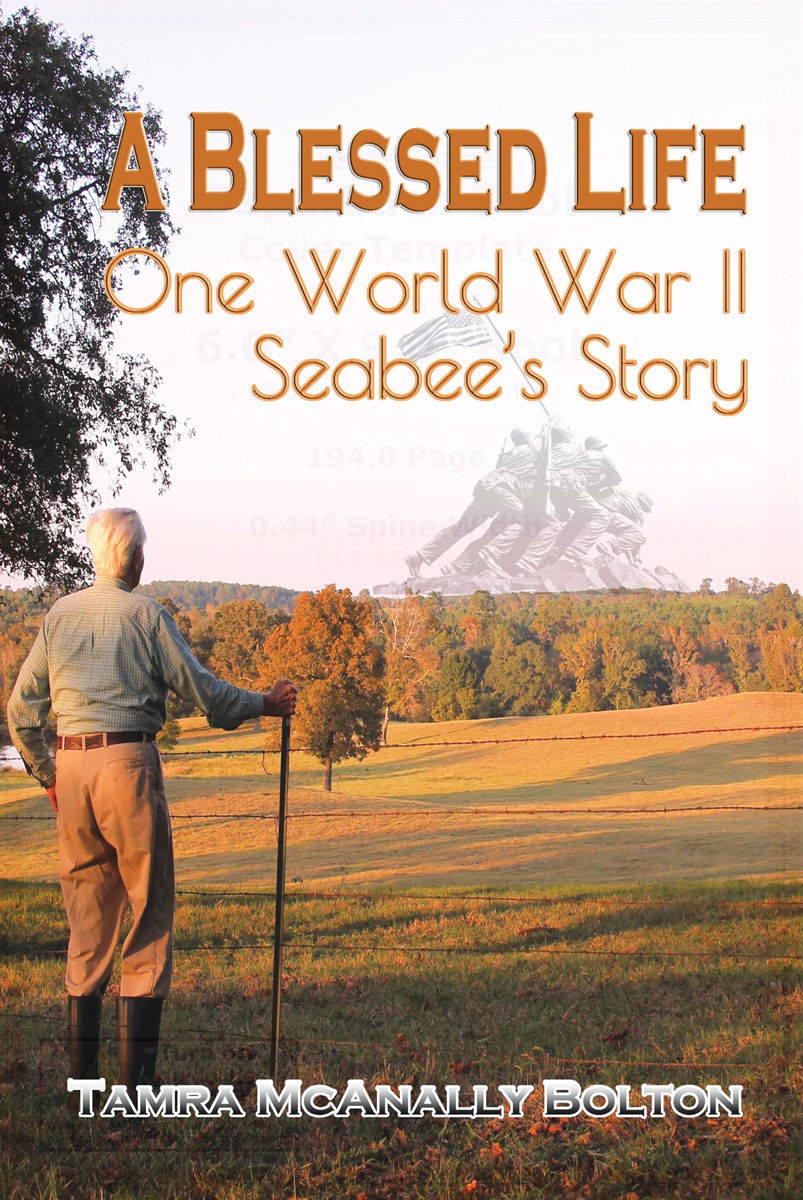 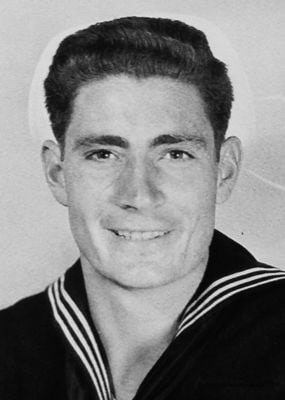 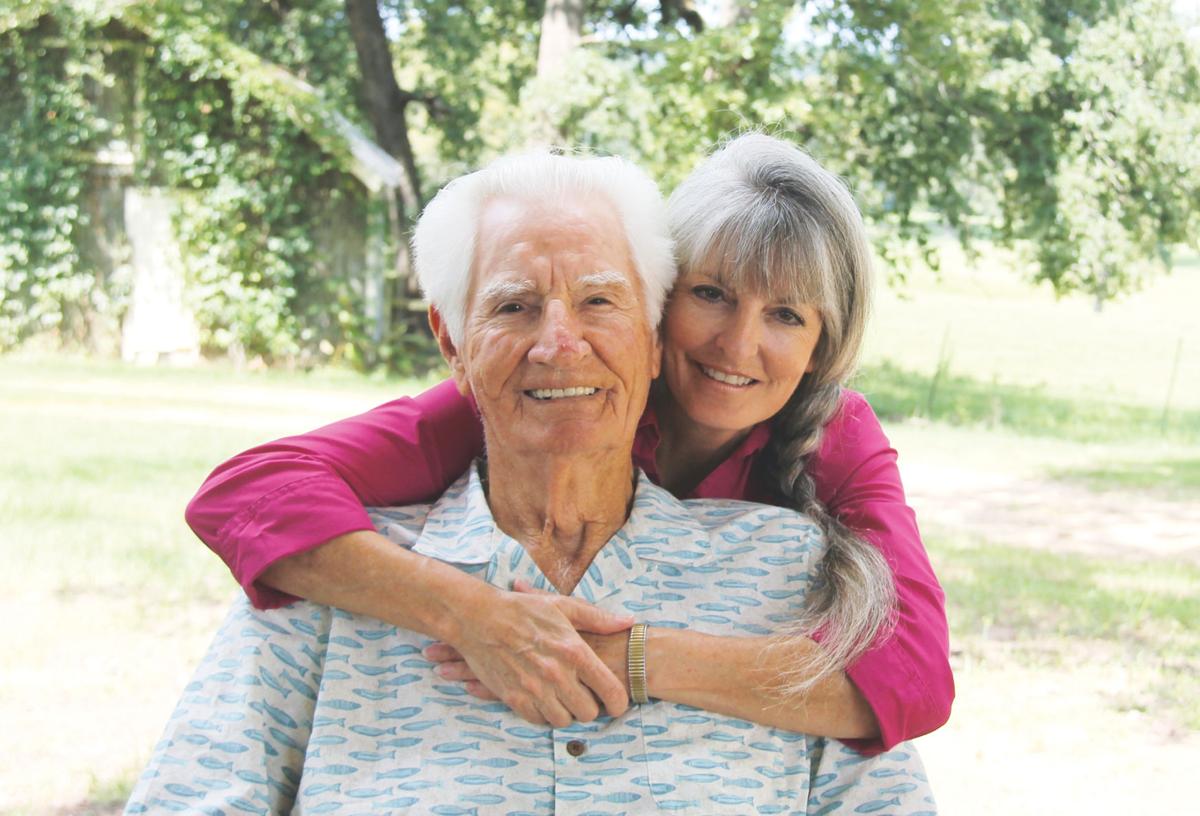 Author Tamra McAnally Bolton with her father today. Bolton will be signing copies of her book, "A Blessed Life: One World War II Seabee's Story" from noon to 6 p.m. Thursday, Feb. 6, at Ruffles in downtown Jacksonville.

Author Tamra McAnally Bolton with her father today. Bolton will be signing copies of her book, "A Blessed Life: One World War II Seabee's Story" from noon to 6 p.m. Thursday, Feb. 6, at Ruffles in downtown Jacksonville.

As the 75th anniversary of the Battle of Iwo Jim approaches, one local woman's desire to preserve family memories has resulted in a book about her father's experiences during that historic battle, as well as a glimpse of life in rural East Texas during the Great Depression.

On Feb. 6, Jacksonville author Tamra McAnally Bolton will sign copies of “A Blessed Life – One World War II Seabee’s Story,” about Stuart McAnally, during a book-signing slated from noon to 6 p.m. at Ruffles, 114 E. Commerce St. in Jacksonville.

“When I began the project of recording Dad's memories and his war time experiences, I was doing it as a way to preserve family memories and make sure his story was not forgotten, but as I continued to work on the project, I began to see it in a new light,” Bolton said.

“With so much negativity and sadness in the world today, I think people are hungry for something good, for the hope that there are still families who love each other and take care of one another. That you can chose a good life even if you have to endure the horrors of war and other terrible things. It's a celebration of family, values and sharing, something we desperately need in our uncertain times,” she said.

McAnally – who turns 97 in August – was a Seabee in the 31st Naval Construction Battalion tasked with clearing the beaches for further landing craft after initial waves of infantry had landed on the shores of Iwo Jima in 1945.

“When I first started recording the casual interviews with him, he said he didn't think anybody

would care about what happened to a poor boy from East Texas, (that) what he did wasn't special. It's what most fellas did back then – they answered the call to duty and did what they had to do,” Bolton recalled her father telling her. “Later, as he saw I was really interested and cared about what happened, he became more forthcoming with his memories and told me things I had never heard … some things he had never told anyone, until then.”

“A Blessed Life” is Bolton's second publication. The first, “When I Was Small,” is a children's book on which she collaborated with her husband, Marc.

On the outset, the tomes appear to be diverse in nature, but Bolton said they “dove-tail nicely into a themed line of books that focus on story-keeping.”

“I am passionate about stories and being a keeper of family history,” she explained. “The children's book is based on my childhood memories growing up on our farm. My husband sketched the illustrations, and I did the watercolors. It is about sharing your memories with your children and grandchildren, because if we don't tell them our stories, they will be lost when we are gone.”

The book focusing on McAnally’s experiences was a treat for his daughter, she said.

“Listening to Dad recall those long ago events, describing the people and settings that are still so clear

in his mind was a treasure. I loved spending that time with him and learning what his early years were like. He did share a couple of surprises, but I won't mention those – you'll have to read the book to

find out,” she laughed.

In some ways, Bolton admitted, the book also “was tough to write, because I felt like I was going with him through all of those hard years … especially on Iwo Jima.”

According to www.history.com, “the Battle of Iwo Jima was an epic military campaign between U.S. Marines and the Imperial Army of Japan in early 1945. Located 750 miles off the coast of Japan, the island of Iwo Jima had three airfields that could serve as a staging facility for a potential invasion of mainland Japan.

“American forces invaded the island on February 19, 1945, and the ensuing Battle of Iwo Jima lasted for five weeks. In some of the bloodiest fighting of World War II, it’s believed that all but 200 or so of the 21,000 Japanese forces on the island were killed, as were almost 7,000 Marines,” the site noted.

“Many tears were shed as I put his memories on paper,” Bolton recalled.

The best part of the project? “Getting the book finished and finally published, (and receiving) my first copy in the mail two days before Christmas – when I placed the book in his hands, he looked

it over and told me I had 'put a lot of hard work into it' and I 'had done a good job.' That was the best moment ever!” she said.

Bolton's labor of love – nearly seven years in the making – is available online at Amazon, as well as from Poverty Ridge Press and at the Feb. 6 book-signing.

The Jacksonville Public Library also has a copy of the book, purchased at the request of a patron who wanted to read it.

“I am so amazed that people are touched by reading the book,” she said, adding that “the emotional response has surprised me. People have said they laughed, cried, and felt they were right there, listening to the stories along with me.

“That makes me happy – I wanted it to be a book that made a difference,” she said.