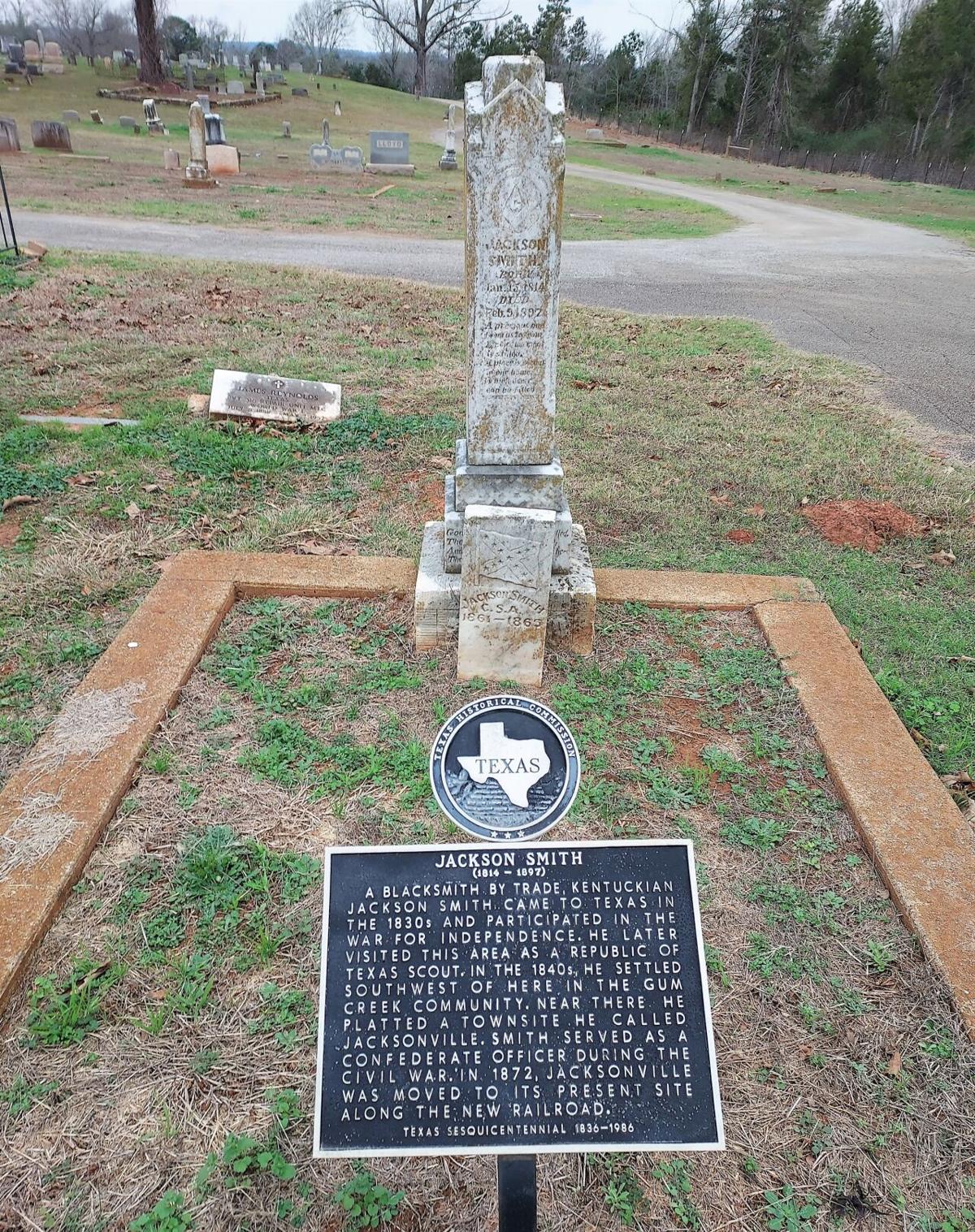 The grave of Jackson Smith is shown with the historical marker. 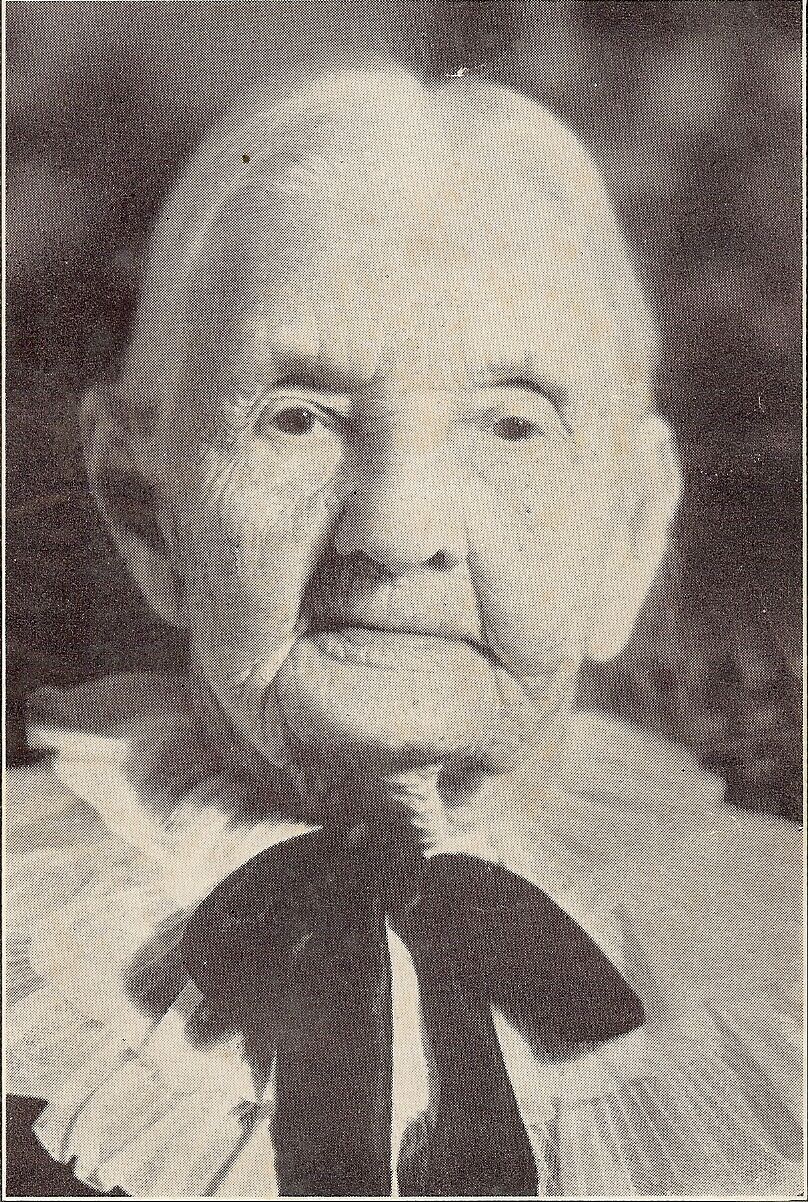 The grave of Jackson Smith is shown with the historical marker.

Walking through the “Old” Jacksonville City Cemetery and reading headstones provides a history lesson much more interesting than any found in a textbook. There are graves of pioneers, of African Americans, Hispanics, business and religious leaders, physicians, educators, veterans who served honorably and many everyday people who made Jacksonville their home.

One burial plot “speaks” to the founding of Jacksonville. A Texas Historical Commission grave marker was placed there during the Texas Sesquicentennial in 1986, recognizing the contributions of Jackson Smith, born 1814, died 1897.

The story of the first town (Old Jacksonville) began in 1838 when Jackson Smith, a Republic of Texas scout with General Thomas Jefferson Rusk’s militia was searching for those responsible for the Killough Massacre. During the search, Smith found an old Indian farm near Gum Creek. The place was so beautiful, the Kentuckian resolved to make his home there some day.

And return he did--nine years later and found a community already there named Gum Creek. He built a log home and a blacksmith shop and was appointed post master when the post office was established in his shop. Interesting to note, while serving in the Army of the Republic of Texas, Smith, at one time stood guard over Santa Anna.

Piecing together the history of Jacksonville requires a deep dive into the writings of historians, as well as conducting current research, then trying to tie everything together. In my latest book, Remembering Those Buried beneath the Cedars, I examined over 50 pioneer cemeteries throughout east Texas and devoted an entire section to the Jacksonville City Cemetery.

During the 1800s, settlers not only established homes and businesses but set aside places for burials. According to late historian Helen Crawford, “…during the early settlement of the area, there were cemeteries everywhere, but as years passed and land owners changed, many have disappeared…The Jacksonville City Cemetery has been used since the early 1840s…”

One of those early settlers was Melvina Chessher, born 1833, died 1940 and is buried at the City Cemetery. She was often called “Grandma Chessher” or simply “Aunt Viny.” In my May 2018 Mother’s Day article for the Jacksonville Progress I called her the “Mother of Jacksonville.” Over time, she had five children, one by each of her first two husbands and three by the third. The Chessher children: Andy Jr. and Kate were born in “Old” Jacksonville and the third child, John, was reportedly to be the first boy born in “New” Jacksonville. Melvina owned a hotel in downtown and lived to be 106. She became quite the celebrity, each milestone of her life heralded in publications throughout the state.

Stories would appear in the Dallas Morning News alerting everyone to Aunt Viny’s Birthday! One special occasion was in 1922 as Jacksonville celebrated its Golden Jubilee, it was also the year of her 97th birthday.

Over time, graves in all cemeteries need care if the historical information recorded on the stones is to be preserved. While giving a gravestone cleaning, working for the Jacksonville Wednesday Study Club in 2015, I began to examine etchings on the iron ore rock in the oldest section of the City Cemetery. Gravestones for the Winter family were in fairly good condition illustrating the resilience of native rock and why many of our earliest grave sites can still be found although identifying who is buried there is difficult or impossible. One weathered stone for William Bell Winter contains partial data: Born April 15, ___, Died Oct. 18___. Another for Luther Winter, still is readable: Born Jan. 17, 1858; Died Sept 24th, 1860.

In an article dated Oct 31, 1927, the late J. A. Templeton Sr., discussed the Jacksonville City Cemetery as being an early burial place: “…From the time Texas was admitted into the union—1845—covered wagons bearing immigrants from the old states arrived so fast it became impossible to “keep up” with the newcomers! Everyone seemed to be a newcomer…” Templeton added that he, “… had a visit from an old schoolmate--85 at the time. They walked the cemetery and his friend took him to where his grandfather, Samuel Odle, was buried--reportedly the first--and his sister buried nearby…He knew the location because of the graves of the Walling family plot which was enclosed with sandstone markers which were placed there before the Odle family had moved away in 1857…”

Templeton went on to explain that he tried but could not verify the first burial. Old timers couldn’t agree and no written records were found. But he did identify the following: “…Among the first burials were: Samuel Odle, John Crunk, Miss Ellen Giffen, a man named Arrington, and a five-year-old granddaughter of Dr. Glidewell…”

Surely stories of those buried at City Cemetery are worth preserving and by doing so we honor them. With approval and encouragement from the city of Jacksonville, a group of cemetery volunteers is being established to collect stories and clean tombstones. This is being done in preparation for a “Walk through History” event sponsored by the Sesquicentennial Committee to be held at the cemetery on October 16, 2022.

If you have family buried in the Jacksonville City Cemetery located on Kickapoo Street and want to share stories and help to clean their graves, contact Deborah Burkett by phone, 903 752-7850, or email, debbietroup7@yahoo.com. Or leave your contact information with Trina Stidman, Director Jacksonville Public Library.

Weather permitting the first meeting to clean stones will be 8:30-11 a.m., Saturday, Feb. 12. Come, if only for an hour, bring a lawn chair. You’ll receive the proper cleaning instructions and learn more about this project to preserve and beautify the cemetery.