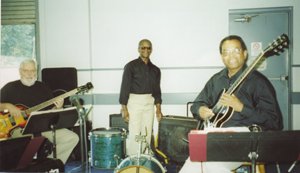 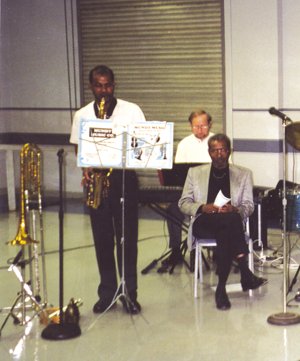 Joe Teague of Jacksonville wants to keep jazz in the minds of East Texans, so much so, that he’s in a Jazz band dedicated to it. “Educators with Attitude” consists of musician friends who either currently work as a band director or have retired from music education. The current group is also in Tyler’s Big Band rhythm section. Joe, who plays guitar in both the Tyler Big Band and Educators with Attitude, said he has played with the Tyler Big Band for about 20 years, and has played with Educators with Attitude for around 15. “When we (Educators with Attitude) started to play at parties and things, people asked, ‘Well, what’s your name?,” Joe explained. ‘We’re Educators with Attitude!’ and the name stuck. Most people call us EWA. “The attitude we have is all about music — particularly jazz. We all do what we can do to promote jazz. We’re in a part of the country where the jazz genre is not that strong,” Joe added. Members include Robert Samuels, main vocalist who worked at Atlanta and Big Sandy high schools; Joe, who is a retired Jacksonville band director and counselor; Alto High School band director Steve Smitha on keyboards; Jacksonville Independent School District assistant band director Ray Vardaman on bass, John Tyler High School band director Otto Harry on trombone, saxophone and flute; and retired band director Chauncey Smith on drums. “We’ve played together for about 12 or 15 years, mainly in the East Texas area,” Joe said. Joe added that they just play for fun, as a hobby, but with a mission — a mission to keep jazz alive. “We’re educators,” Joe said. “We don’t handle it as our main profession and we don’t have any records out.” Joe has worked for the Jacksonville Independent School District as the high school band director and later as a counselor, for approximately 20 years, with a music education teaching career totaling 40 years at various schools. “My first job was at Dangerfield, over at the middle school, then Crockett High School. I was also the band director at John Tyler High School in Tyler,” Joe said. Joe said the group performs a variety of jazz pieces, both new tunes and old classics. “We play mainly jazz, also a little blues and bosa nova,” he said. “It’s mostly jazz you’ve heard before. We play very few originals. My brother in Austin wrote two originals, and they’re the only originals we perform.” Joe said the group plays at various functions, such as parties, wedding receptions, community events and dances, to name a few. “We enjoy playing music that’s been around for a long time. The history of the songs have been here for a long time. Our attitude is such that we try to keep that type of music alive,” Joe said. Those who want to listen to Educators with Attitude can do so this month, as they will perform for a political fundraiser at 7 p.m, August 26, at the Norman Activity Center.

Funeral services for Tommy Dosser, 67, of Rusk, will be 10:30 a.m., Wednesday, July 8, 2020, at the Wallace-Thompson Funeral Home Chapel, with Bro. Brad Turlington officiating. Burial will follow at Mt. Comfort cemetery in Maydelle. Mr. Dosser passed away July 4, 2020, at home with family al…