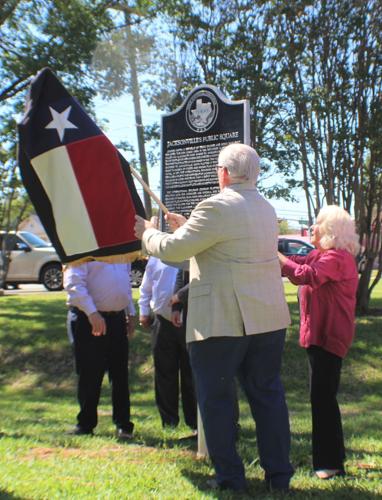 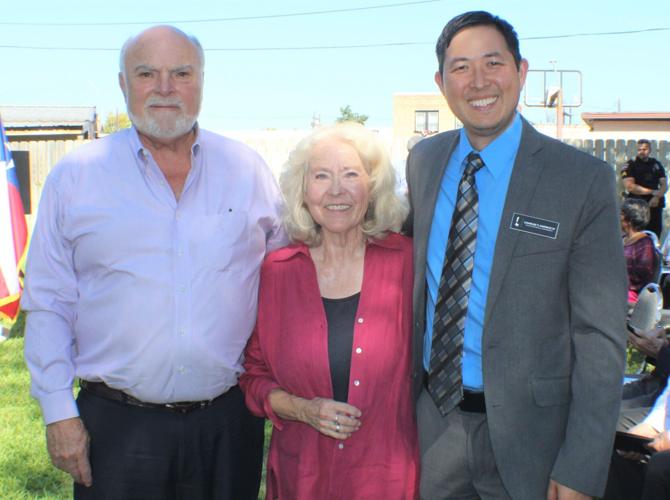 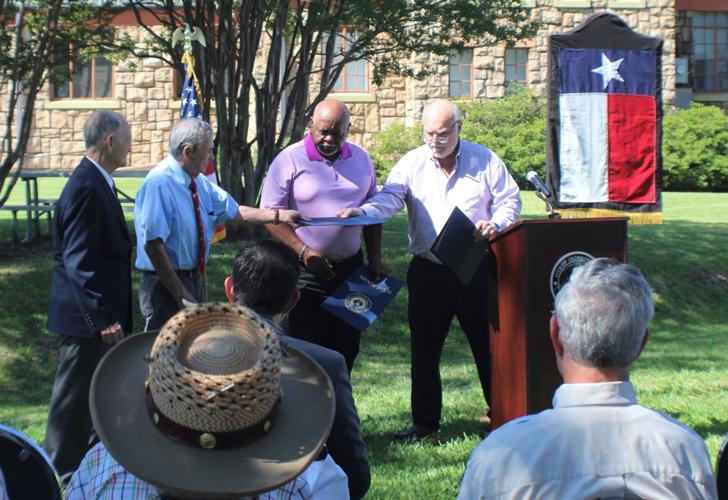 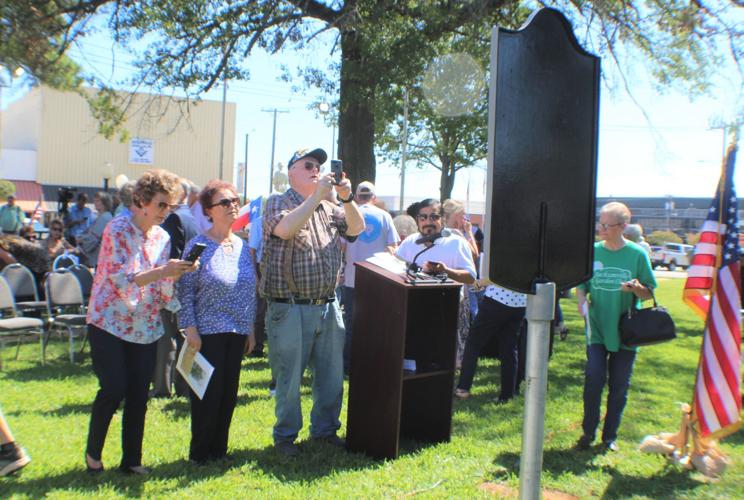 Several people draw close to read and take pictures of the historical marker after the dedication ceremony Sept. 21. 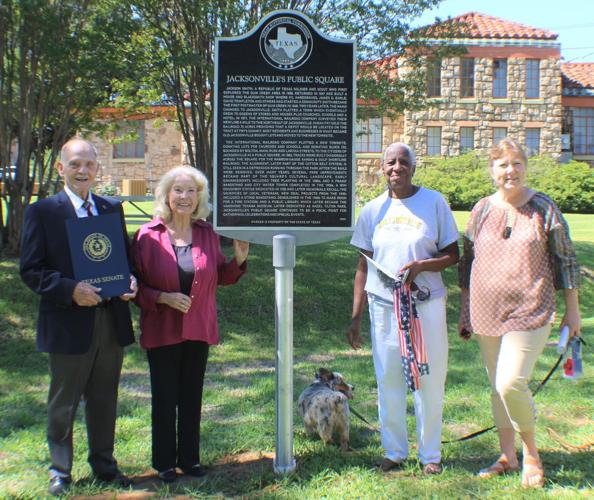 Members of the Sesquicentennial committee who were present at the dedication ceremony pose with the historical marker. These include (from left) Sam Hopkins, Dr. Deborah Burkett, Charlie Esco and Kathleen Stanfill.

Several people draw close to read and take pictures of the historical marker after the dedication ceremony Sept. 21.

Members of the Sesquicentennial committee who were present at the dedication ceremony pose with the historical marker. These include (from left) Sam Hopkins, Dr. Deborah Burkett, Charlie Esco and Kathleen Stanfill.

A crowd gathered in Jacksonville’s Hazel Tilton Park Sept. 21 to witness the dedication of a historical marker, received during the city’s 150th anniversary.

Senator Robert Nichols served as the keynote speaker for the dedication of the historical marker commemorating the Jacksonville Public Square. He listed several advancements made during the 50 years since Jacksonville’s centennial before describing the times just prior to the city’s founding.

“When I actually went back and looked at some of that I was amazed at how many really major changes they went through here in Cherokee County just before the founding of Jacksonville,” Nichols said.

After describing the times that included the Civil War and Reconstruction, Nichols said, “We can see what happened to the people in Jacksonville after 1872 when Jacksonville was formed because we can look at the history books. But in that short period of time, those people who had the guts to form this city, our pioneers, really had a positive view of the future and it’s amazing what they did.”

Nichols then read a Senate proclamation recognizing Jacksonville’s sesquicentennial, copies of which were presented to George Martin, Cherokee County Commission Chair; John Taylor, President of the Vanishing Texana Museum Board; and Sam Hopkins, Sesquicentennial Celebration Committee Chair of the time capsule project. The copy presented to Hopkins will be included in the time capsule to be buried later this year.

Sadnick declared such dedication spoke to the impact of this county’s history, the diligent work of county historians to preserve it and the value residents place on their history.

“Jacksonville’s Public Square is significant because its story conveys the story of Jacksonville, the coming of the railroad and designation of a public square which would become the site of many relevant structures and events,” she said.

A ditch running through the park serves as a physical reminder of where the railroad once was.

As to structures in the square, Burkett noted the public library, now home to the Vanishing Texana Museum; and the wooden bandstand that was replaced in the 1930s with one made of stone, only to be demolished in the 1960s to make room for the fire station; and the war memorials inscribed with the names of those from Cherokee County who gave their lives while serving their country.

“Today, we dedicate this marker which we hope future generations will enjoy and learn about their past,” Burkett said.

In closing remarks offered by City Manager James Hubbard, an announcement was made concerning the park.

“We want to pay homage to this park and the role that it’s played in this community. There are plans to demolish the fire station later this year and we are in talks with the firm out of the Dallas area to start planning this to become what it was before and again become the community gathering place,” Hubbard said, a comment that met with applause.

Jacksonville Mayor Randy Gorham was given the honor of removing the cover and revealing the historical marker.

Hazel Tilton Park is located at the corner of S. Bolton and E. Larissa Streets.