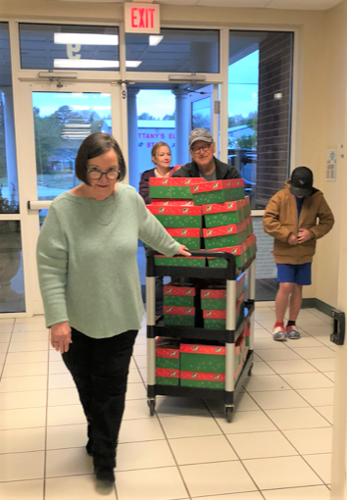 Susan and Randy Jackson of Central Baptist Church assist Wendy Bristow and her son, Hudson, as they bring their church’s shoebox collection to the local Operation Christmas Child location. 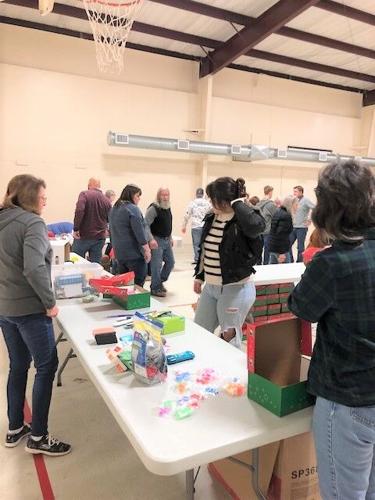 Susan and Randy Jackson of Central Baptist Church assist Wendy Bristow and her son, Hudson, as they bring their church’s shoebox collection to the local Operation Christmas Child location.

It might be a ball, a pair of socks, a box of crayons, but for children around the world, an Operation Christmas Child box might have exactly what was wanted – and probably also what was needed.

The annual collection of shoebox gifts is a ministry of Samaritan’s Purse, an international Christian relief and evangelism organization headed by Franklin Graham, son of the late Billy Graham, world-renowned evangelist. Since 1993, more than 198 million Operation Christmas Child gift-filled shoeboxes have been distributed to children in more than 170 countries and territories.

The organization’s website, samaritanspurse.org, states, “After collecting 10.5 million shoeboxes globally in 2021, Operation Christmas Child hopes to collect enough shoeboxes to reach 11 million children in 2022, with 9.4 million of these boxes coming from the U.S. This year, OCC expects to collect their 200 millionth shoebox gift.”

To accomplish this, more than 498,000 volunteers worldwide, with nearly 200,000 of those in the U.S., are involved in collecting, shipping and distributing shoebox gifts.

The drop-off location for Cherokee County and the surrounding area is Central Baptist Church, 1909 E. Rusk St., in Jacksonville. Steve Edwards, Minister of Sr. Adults and Missions at CBC, is the coordinator for the local location.

“This year’s collection week is Nov. 14 through 21. We will collect the boxes each day from 4 to 6 p.m., with extended hours on the weekend. Churches, or even individuals, will drop their boxes off to us. We count them and load them into shipping boxes that will be delivered to the Athens drop-off location,” Edwards said.

Central Baptist has served as the local drop-off location for the past eight years, and Edwards said there are some 15 churches in the county who have historically participated in the endeavor.

“I’m always surprised at the number,” he said. “Sometimes the smaller churches collect a great deal. I know a small church in Rusk that collects 75 to 100 boxes each year, and several smaller churches in Jacksonville do so, as well.”

“I would have thought we would have had less, because of COVID,” Edwards said, “With people staying home and some not able to work, but we actually took in more last year than ever before.”

Churches vary in the way they accept donations from their members. At Beall Chapel Baptist, for instance, members shop for different items each month: shoes and underwear, toiletries, school supplies and toys, and then assemble them at a packing party, which includes feeding the volunteers.

In some churches, certain groups take on the mission to pack the shoeboxes; others involve the entire congregation. At Central Baptist, the children’s Sunday School Departments collect items and work in each class to compile the items into the boxes provided by the church through the Samaritan’s Purse organization. While doing so, they are able to watch a short video showing where the boxes are shipped, and to see the joy on the faces of other children around the world when those kids receive their boxes.

Adults at CBC also pack individual boxes, and each day during collection week, volunteers at that church receive, label and pack each box into the larger shipping boxes.

Each box requires a $10 donation to ship, and should be included with the shoebox, but in some cases, a church will simply provide the amount equal to its donation.

Leighanne Austin is the Logistics Coordinator for the Trinity River Area. She oversees shoebox collections in six East Texas counties, including Henderson, Navarro, Freestone, Anderson and Cherokee, with seven drop-off locations. Collections from Cherokee County are dropped off at the Athens Central Drop Off location. Coordinators there are Sheila and Eddie Smith with One Hope Athens.

“There are approximately 323 churches that participate in the Trinity River Area, plus families and individual groups,” Austin said. “During National Collection Week, boxes are loaded on 18-wheeler trailers from the Central Drop Off location in Athens and delivered to the Dallas Processing Center, which is actually located in Coppell, near Dallas.”

Churches or individuals can purchase pre-printed shoeboxes from samaritanspurse.org from the Operation Christmas Child store, or pack a regular shoebox.

For more information, go to samaritanspurse.org/operation-christmas-child.

Although the collection at CBC began Monday, there is still time for interested churches or individuals in Cherokee County to donate. Shoeboxes will be accepted Saturday from 9 until 11 a.m., and on Sunday, from 3 to 5 p.m. Remember to include your $10 donation for each box.