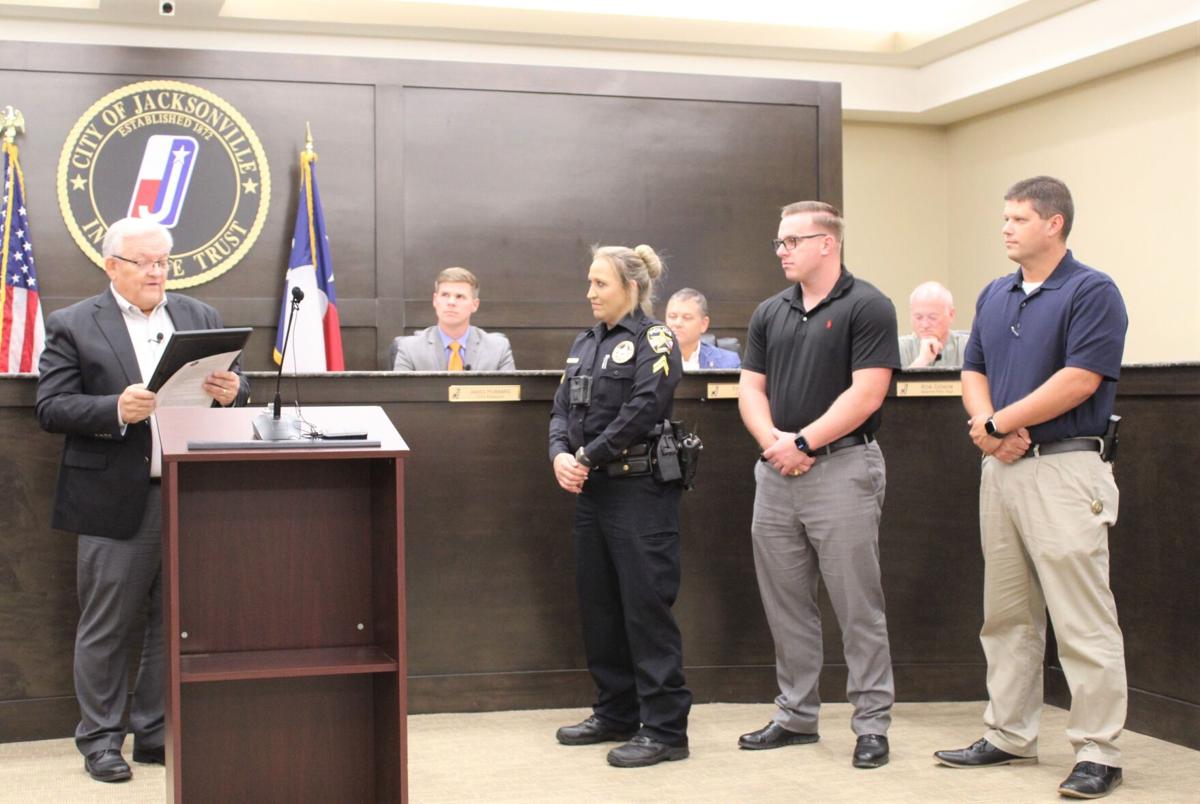 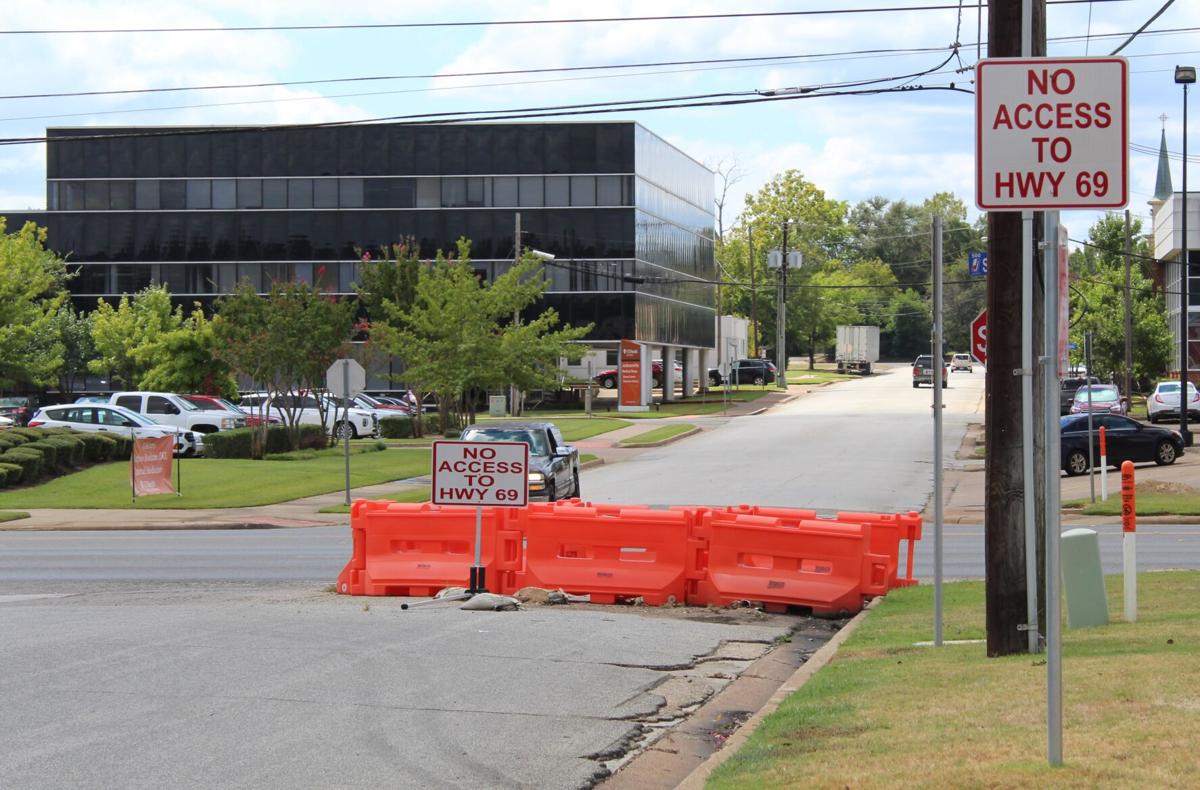 Jacksonville city council voted to remove the barricades and restore access to US 69/S. Jackson St., from Nacogdoches Street. 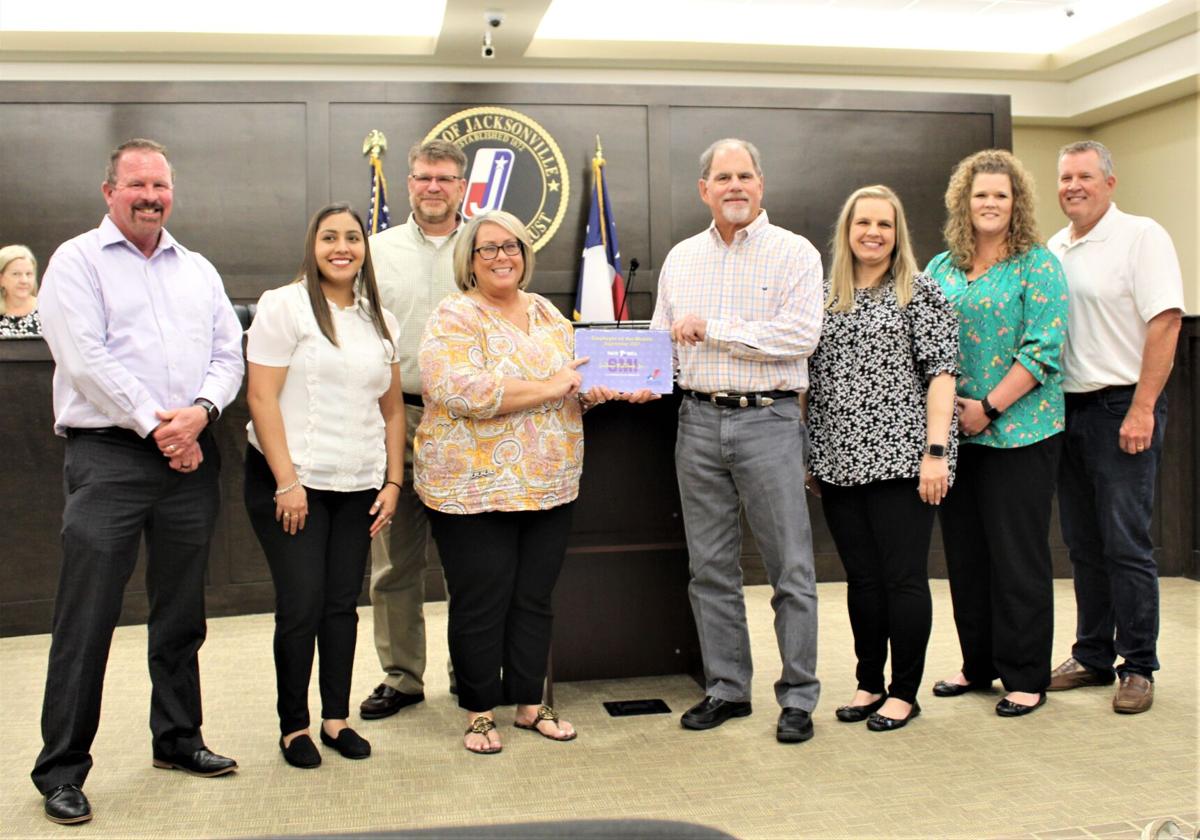 Southern Multifoods, which owns 106 restaurants including the Jacksonville Taco Bell, was named Employer of the Month by Jacksonville Economic Development Corporation. 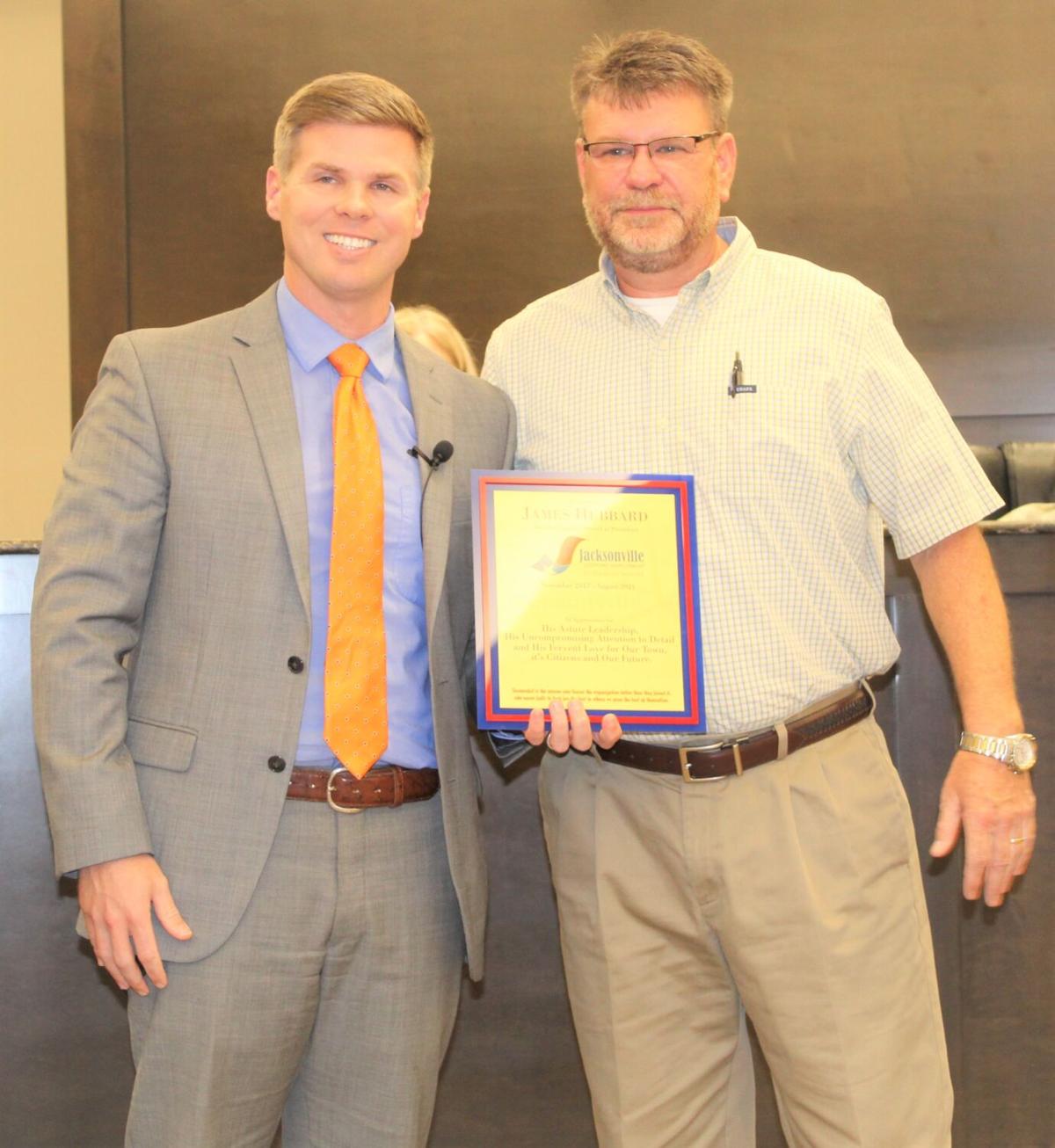 On behalf of Jacksonville Economic Development Corporation, Chairman Darrell Dement presented a plaque to James Hubbard in recognition of his work as president of the organization. 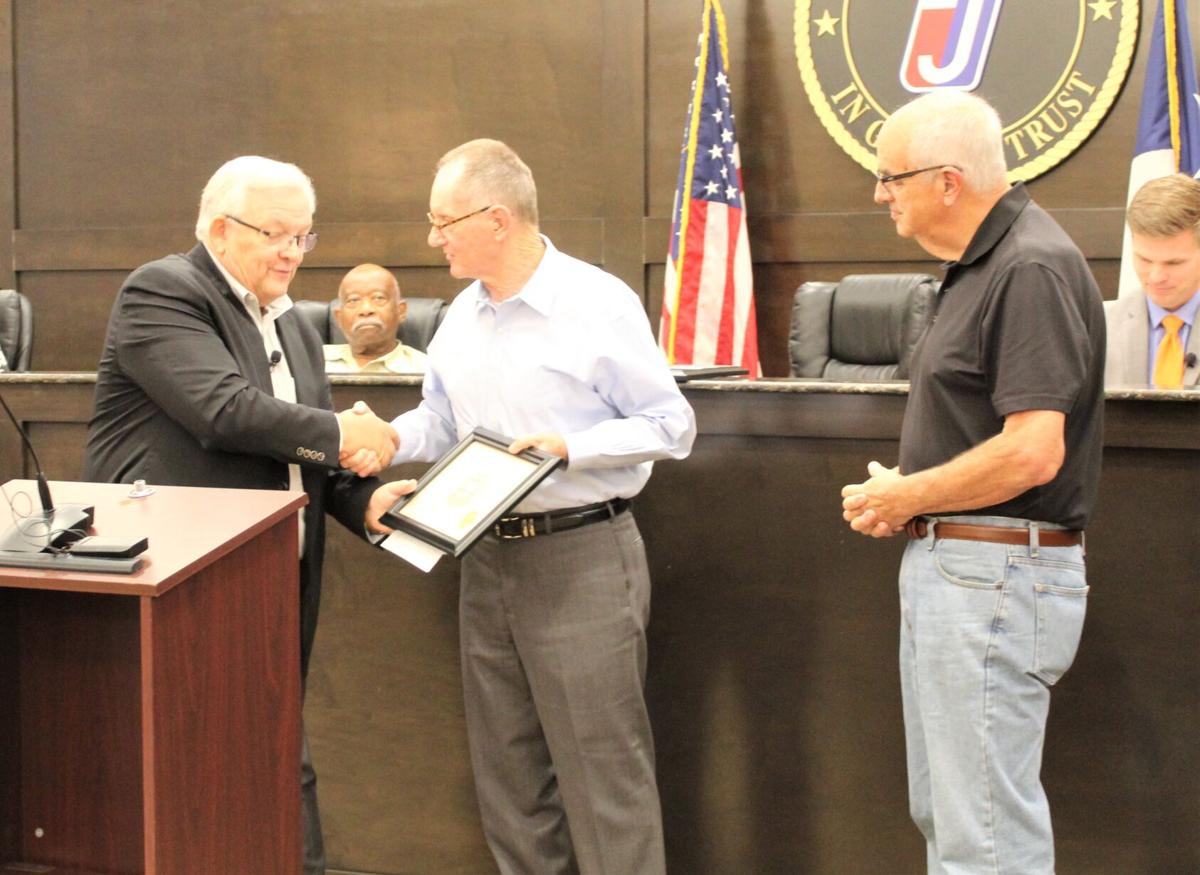 Barry Hughes was recognized by the city for his volunteer work at the Texana Vanishing Museum.

Jacksonville city council voted to remove the barricades and restore access to US 69/S. Jackson St., from Nacogdoches Street.

Southern Multifoods, which owns 106 restaurants including the Jacksonville Taco Bell, was named Employer of the Month by Jacksonville Economic Development Corporation.

On behalf of Jacksonville Economic Development Corporation, Chairman Darrell Dement presented a plaque to James Hubbard in recognition of his work as president of the organization.

Barry Hughes was recognized by the city for his volunteer work at the Texana Vanishing Museum.

“We’ve observed this intersection closely since the opening of March of 2020 and really, we don’t believe the barricades remain warranted,” said City Manager James Hubbard. “Our plan, pending your approval this evening, would be to remove the barricades prior to the end of the month and at least give it a 30 to 60 day window to observe the intersection, make sure there weren’t any negative impacts to traffic patterns, whether on private property or on state or city right-of-way. Then, if for some reason those barricades are warranted, we’d come back with a permanent solution so it doesn’t look like we have a permanent construction zone on Nacogdoches Street.”

Hubbard also reported the owner/operators of the two restaurants at that intersection were in favor of the reopening of Nacogdoches Street.

The council authorized an ordinance removing last month’s ordinance to prohibit through traffic on Devereaux between Bolton and Bonner Streets.

“This decision was made to promote safe travel of fire apparatus through the narrow section of street,” Hubbard said. “Since that meeting, the traffic plan within the Public Safety Complex has been amended and both the fire chief and police chief recommend reopening Devereaux Street to through traffic. We believe that its closure would negatively impact school bus traffic and the general public. We can have our own internal policies to make sure there is safe passage for fire apparatus on Devereaux.”

Two items, the budget and tax rate, were tabled.

“I think some of you know Roxanna Briley, used to be our finance director, she’s coming back full time on Friday,” Mayor Randy Gorham said. “Out of interest of getting her up to speed, this will be kind of her budget, we felt like we owed her the courtesy to look at that budget before we actually approve it.”

He said the council will call a special, evening meeting to look at the tax rate and budget and stream it live on YouTube.

• The re-plat of Lot 8RR and 9RR of Redbird Lane Subdivision;

• The re-plat of Lots 6 and 7 of Block C Lake Springs Subdivision Lake Jacksonville;

• Payment of invoice from Drewery Construction related to 2021 street overlays;

• Modifications to the engineering contract for the downtown sidewalk grant; and

• A resolution supporting and adopting the allocation method for opioid settlement proceeds.

The consent agenda was approved in whole and included:

• The closing of the 100 block of S. Bonner between Wilson and Commerce for the Bull Bash kickoff dance;

• Road closures in support of National Night Out on Oct. 5; and

• Street closures for annual Christmas Parade as requested by the Jacksonville Chamber of Commerce.

Special presentations included naming Southern Multifoods as Employer of the Month, recognizing Barry Hughes for his volunteer work at the Vanishing Texana Museum, proclaiming Oct. 5 as National Night Out and honoring James Hubbard for his work as the president of the Jacksonville Economic Development Corporation.

A resident of District 1, McCuin voiced concerns related to safety. He noted trees overhanging power lines, vines covering stop signs and water shedding into the streets instead of a nearby creek. He presented a written list of his concerns to members of the council.

Fritz Curtis reminded the council that there had once been a plan to construct a bike trail at Lookout Mountain and a survey had been conducted, but nothing came of the effort.

“It would have been a great addition to the town. I’m sure a lot of people would have enjoyed it. People would have come from different cities to enjoy it and I was hoping to spark some new interest in it.”

Although council members could not respond at that point in the meeting, Councilman Rob Gowin stated, during the open forum, that he agreed the bike trails would benefit the whole community.

“Randy Gorham told me on my first day that big wheels turn slowly, and it does. It’s just one of these things where sometimes it will take three or four budget cycles just to get that kind of stuff worked in.”

The first was to accept a gift of approximately four acres adjacent to the land fill which was previously deeded to JEDCO.

The second was to authorize the city manager and city attorney to negotiate conveyance of 301 E. Commerce St., the former location of city hall, to JEDCO subject to JEDCO’s negotiations with their prospects.

A Celebration of Life for Johnnie Richey, 72 of Rusk, will be 10 a.m., Wednesday, October 20, 2021 at the Rusk First United Methodist Church under the direction of Wallace-Thompson Funeral Home with Pastor TJ Gableman officiating. He passed away at home October 15, 2021. He was born April 2,…