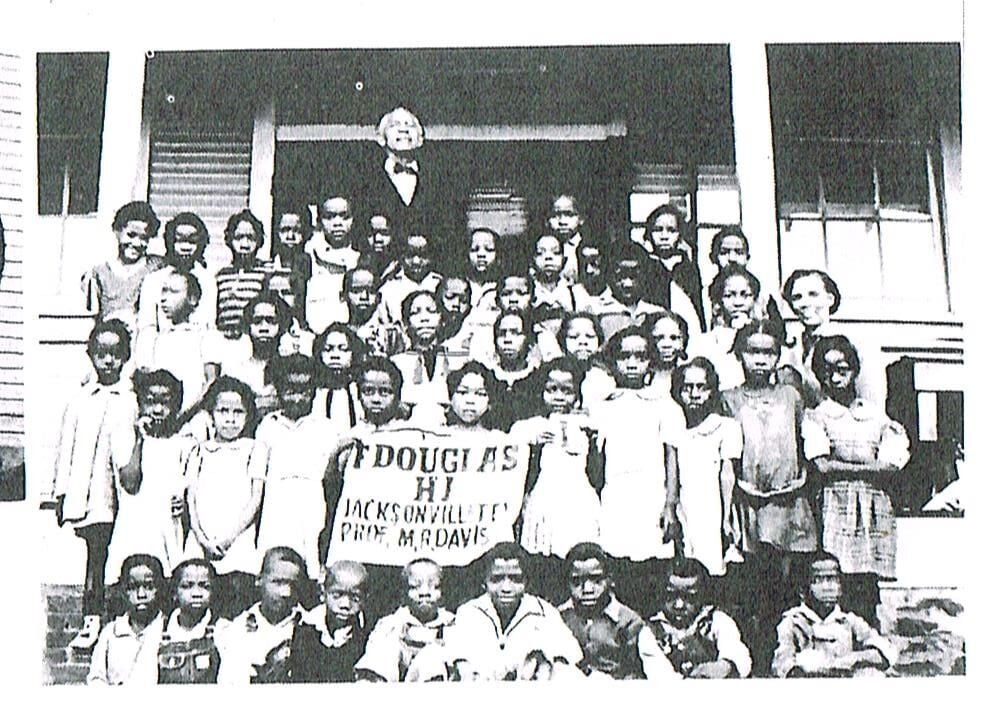 One of the earliest photos from the Rosa Clemons collection: Principal M.B. Davis with students. On the far right, middle row standing, is teacher Rosa Clemons. 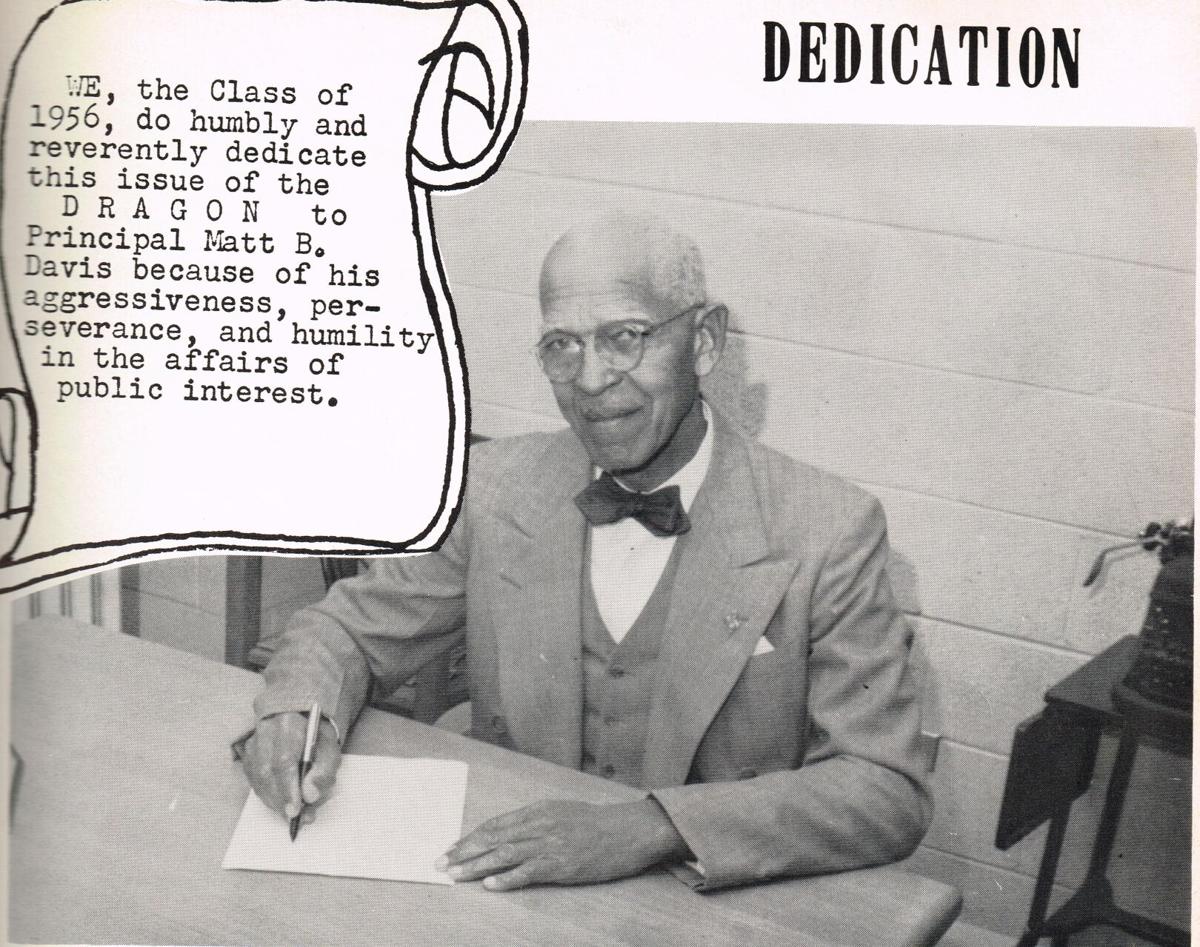 A scanned photo from the 1956 yearbook, The Dragon, showing Principal Davis in his office. The scroll displays the message from students who dedicated the yearbook to Davis.

One of the earliest photos from the Rosa Clemons collection: Principal M.B. Davis with students. On the far right, middle row standing, is teacher Rosa Clemons.

A scanned photo from the 1956 yearbook, The Dragon, showing Principal Davis in his office. The scroll displays the message from students who dedicated the yearbook to Davis.

Recognizing Fred Douglass as a historic educational institution was long overdue when in 2017, members of the alumni association established a committee to seek approval for a state marker. The application process is quite lengthy and requires much detail regarding the historical significance of a topic. Documentation for Fred Douglass included old school records, maps and architectural drawings of school buildings throughout history. As a member of the Cherokee County Historical Commission, it was an honor to help facilitate the process and to also conduct interviews which were included in the application.

The marker was readily approved by the Texas Historical Commission in Austin and stands today on the southeast corner at the intersection of M. B. Davis Drive and H. V. Jones Drive in the Lincoln Park community.

In honor of Black History month, information collected for the marker application is featured here. Note: the vernacular of the era will be used.

The first “school house for Negro children” in Jacksonville was located on the corner of Kickapoo and Washington Streets, on the north side of town, near what is now the Jacksonville College campus. In the early 1900s, the school was moved to North Ragsdale Street. It was then known as the “little red school house”. The school was a three-room, frame building with wood burning stoves. Mr. G.W. Crouch served as principal until mid-term of 1921, after which Professor J. H. Howard became the new principal. In the same year, the “little red school house” burned and was reconstructed under the guidance of Howard.

Many details regarding these early schools have been lost, but through private collections such as the photos preserved by former educator Rosa Clemons important information was saved. After teaching at the “little red school house” Mrs. Clemons continued a career in education, retiring in the late 1960s,

In one photo, Davis is seen with a group of students. Mrs. Rosa Clemons is standing in the middle at the far right. While serving as principal at this location, Professor Davis was elected president of his State Teachers’ Association

This school on Elberta Street (named Fred Douglass) was built in 1922, at a total cost of $5, 700. This cost included local funds and money from the Julius Rosenwald Foundation. The school building contained six classrooms, principal’s office, book room and auditorium.

The Rosenwald Foundation established by Julius Rosenwald, President of Sears Roebuck & Company committed large sums of money for the construction of schools, known as Rosenwald Schools, in poor, primarily Negro districts in 15 Southern states.  These schools were cooperatively built with assistance from the local communities.

The property commonly known as Lincoln Park was actually dedicated as Wade Park, named after benefactor, M.C. Wade, a real estate developer who “donated land for a park to the Colored People of Cherokee County.” The completion of the park and rock columns was a WPA Project. Several columns are still visible.

In 1930, the Elberta Street Fred Douglass School was moved to the Lincoln Park Addition at a cost of $20,000. For that time, this new brick building was one of the most modern buildings in East Texas. Enrollment had increased and ten teachers were employed. The school had an auditorium that seated 400; twelve classrooms, a principal’s office, cloak rooms and a home economics room with a large pantry.

As the depression years set in, the Jacksonville School District found itself with less money; times were difficult. Fewer teachers were hired and salaries were not set.

However, in 1938, once the crisis of the depression years began receding; salaries stabilized, more teachers were hired and the most extensive building program in Jacksonville’s history was begun. The Tomato Bowl athletic stadium for Jacksonville High School was started with the help of the Federal Works Progress Administration (WPA) and at the same time improvements were made on the campus of the Fred Douglass School located in Lincoln Park.

The award winning Fred Douglass football team would also utilize the Tomato Bowl for its games. In the mid-1940s, one such memorable game was with Hill High School (Henderson). In the ensuing years, Fred Douglass had a full athletic program, band, cheerleaders, choral group, campus newspaper (The Dragon), a yearbook, student council, drama club, National Honor Society and drill team. The band and athletic program were award winning. All UIL competitions were held at Prairie View A&M University.

Recorded in Jacksonville School Board Minutes, September 1951, a bid was let for construction of another, larger Fred Douglass High School at a cost of $306,490. This building was located on Gaston Street and was used as a high school until 1970.

Integration began in 1966. Under a freedom-of-choice system which was a staggered integration system, elementary school students began choosing a school to attend. During this time several teachers (Black and White) integrated campuses. By the fall of 1970, all elementary students and Fred Douglass High School students had integrated into the Jacksonville School District. It wasn’t always easy but dedicated teachers on both sides helped the process move along. When students were totally integrated into the Jacksonville system, Fred Douglass High School sat vacant, and burned in 1979.

The following memories provide details historical documents cannot and illustrate a sense of pride in being part of the “Fred Douglass family.” These are but a few of the quotes submitted for the marker application.

According to Charlie Mae Esco (Class of 1955), “I first attended elementary school at Mt. Haven, a Negro community near Jacksonville. At 13, I went to Fred Douglass. I remember my Home Economics teacher, Mary Freeman; she taught us how to sew, exposed us to a broader world and was beloved by all. Later she taught at Jacksonville High School after integration…School felt like family…I graduated before integration, and then attended Prairie View University which was all Black at the time. So I never attended a school with White students. My children and grandchildren did…I believe it is my duty to tell the story of what it was like…to keep our history alive...”

Oscar Faye Branch Williams, Valedictorian, Fred Douglass Class of 1969 shared, “I attended a small community school (Churchill Elementary) from the 1st-8th grade, with my mother, Ernestine Jones Branch, teaching me 1st-3rd grade. I began my freshman year at Fred Douglass High School in 1965, where my uncle H. V. Jones was principal. Years later, after my retirement from the City of Dallas in 2010, I began working with Texas Engineering Extension Service. This position necessitated travel throughout the state. I began not only to notice, but to search for historical markers in each municipality. As President of the Fred Douglass Alumni Association, researching the history of our school became an urgent project…I realized our school history had been reduced to vacant land, was fading away and the placement of an historical marker was long overdue.”

In a recent phone call, James Brown, Class of 1967 and current President of the Alumni Association remarked “Over the years we’ve tried to keep our legacy alive; the approval of the marker was the culmination of years of work. I followed Oscar Faye as President. Our group still has lots of ideas…We are actively looking to the future while developing projects that honor our past…”

Other graduates include the late Paul B. Ragsdale, an African-American Texas legislator from 1973 to 1987 and one of the first black legislators elected to the Texas House of Representatives since Reconstruction. Born 1945, in Mount Haven, a close-knit community founded as a refuge for freed slaves in Cherokee County, Ragsdale and his brother Godfrey attended Mount Haven School and Fred Douglass High School in Jacksonville.

In closing, it is fitting to end with a message from Principal M.B. Davis found in the 1956 yearbook, The Dragon. He wrote the following to the graduating class, “You have an excellent motto, ‘The Door to Success is labeled PUSH.’ I urge that you allow the meaning expressed in this motto to serve as an inspiration to you through the years to come. Your contacts and experiences at Fred Douglass High should give you a good foundation upon which to build a life of service to your community, your nation, and yourself. With every good wish, I am, yours truly, M.B. Davis.”