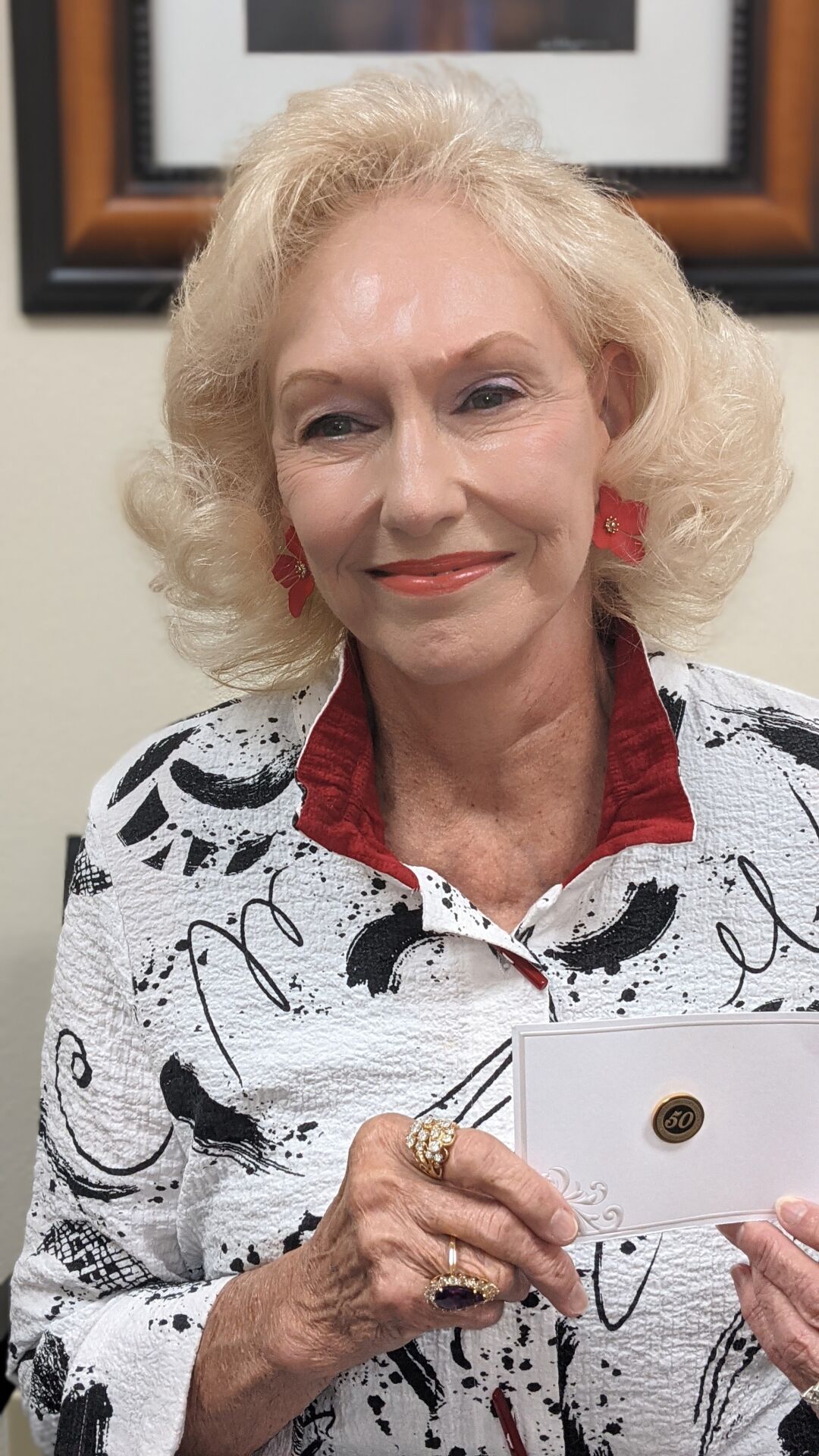 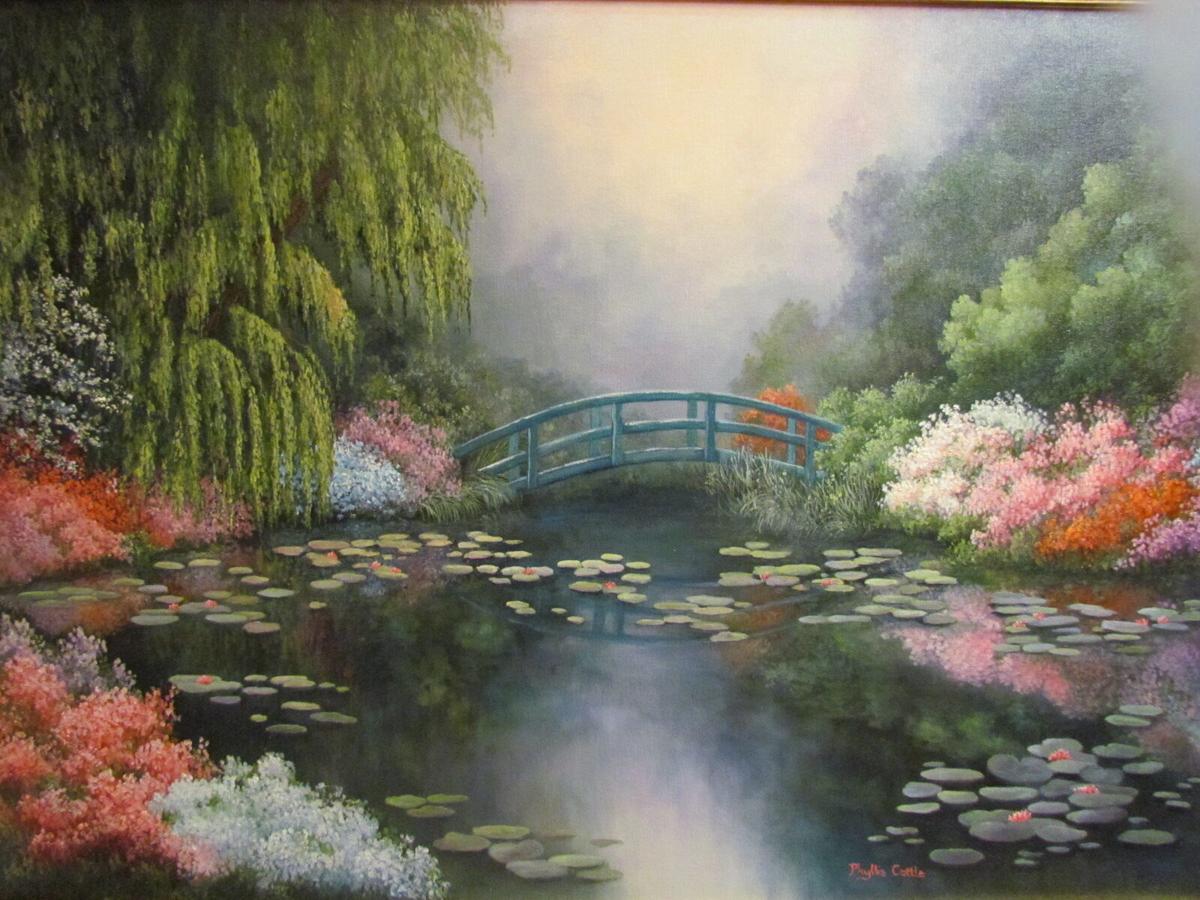 An example of her oil painting depicts Phyllis Cottle’s style and ability.

An example of her oil painting depicts Phyllis Cottle’s style and ability.

Although she was originally to receive the pin at the 2020 convention of the TFDA, that meeting was canceled due to COVID-19. Unable to attend the 2021 convention, her pin was eventually mailed to her.

Although it seemed natural to her to attend mortuary school after working in her parents’ funeral home,

When she began her studies, only two other women were taking the course. Due to the closure of another mortuary school, Cottle’s class added several students, including two more women. Of the handful of ladies, Cottle recalls being the only one to receive her funeral director’s license.

“I think they didn’t complete their internship. I think they just never completed that and then showed up for the final exam, the state board,” she said.

Cottle received her own license in 1969. She and husband Gene moved to Troup in 1977 and bought a funeral home in town.

Even though Gene completed his own internship under Phyllis’ license, she claimed, “He’s still the boss.”

Gene had also worked for Phyllis’ parents in their funeral home, beginning at the age of 13, so both had experience in the field long before either received their own licenses.

It wasn’t common for a woman to be a funeral director, when Cottle started out.

“I could get the feeling that a man wasn’t real comfortable that I was the one telling him these are the rules and regulations we have to follow. Mostly, everybody was receptive that it was a lady that was helping them,” she said.

She worked during a time when the funeral homes also ran the ambulance service.

“It was very basic, not like paramedics and EMTs. Basic transportation with oxygen. We could do basic CPR. We took a basic first aid class that the Red Cross gave,” Cottle said. “It was the way it was done. Even then, they didn’t expect to see a woman.”

She says she was often mistaken for a wife or daughter of a patient instead of the ambulance attendant.

The couple eventually owned two funeral homes, the one in Troup and one in Overton, both of which were sold in 2012.

Although experienced in helping their parents in the funeral home, none of the Cottle’s four daughters chose to become funeral directors.

“They all had their own little plan, what career they wanted, but we never really encouraged them [into funeral directing],” Cottle said. “Every one of them has a different career.”

Phyllis says being a funeral director had been more than just a job.

“It was very personal because the main thing is, after being her for just a few years, or even a matter of months, first thing you know we were burying our friends’ family members and sometimes even our friends. The longer we stayed her, the more and more we experienced that. We were burying our friends, so it was personal to us in many ways. But, we did feel very personal involvement with all or our families, whether we had ever seen them before at any time,” Cottle said.

“I think we bonded with these families because we wanted to help them at that difficult time and they could feel that it was genuine, that we really cared.”

The greatest sense of satisfaction for Cottle was when they would receive complements from the families they served.

“I loved it, personally, when they complemented on the way the person looked. That meant a lot to us, also,” she said.

She remembered one mother who had to bury her son following his death due to a car accident.

“She told me later, ‘I was very upset, of course, but it gave me comfort to know that you were taking care of him’,” Cottle said.

Her retirement is filled with time enjoying her five grandchildren, working in the yard and painting.

She still enjoys traveling with her husband, although most of their travels are now aboard cruise ships.

“We never had cruised until about eight years ago. All of our travels were flying somewhere. They were land cruises,” Cottle said. “I’m glad I did the other travel when I was young and I could lug my own suitcase, read a map and find our way around. Traveling is strenuous.”

Their first cruise they took went around South America. Once they returned, she booked another cruise for just four months later.

“Cruising is wonderful. Once you get to that place where you get on the ship, well, it’s smooth sailing,” she said. “Somebody else is cooking, cleaning and doing the laundry.”

The couple has a cruise to the Caribbean planned around Thanksgiving.

“Gene and I, one of new loves in the last number of years is ballroom dancing. On the ship we get known as the dancing couple,” she said.

Considering the mindset when she became a funeral director, Cottle said she’s happy things have changed.

“I’m glad we don’t think that way,” she said. “Everybody has the capability of doing whatever they want to do.”