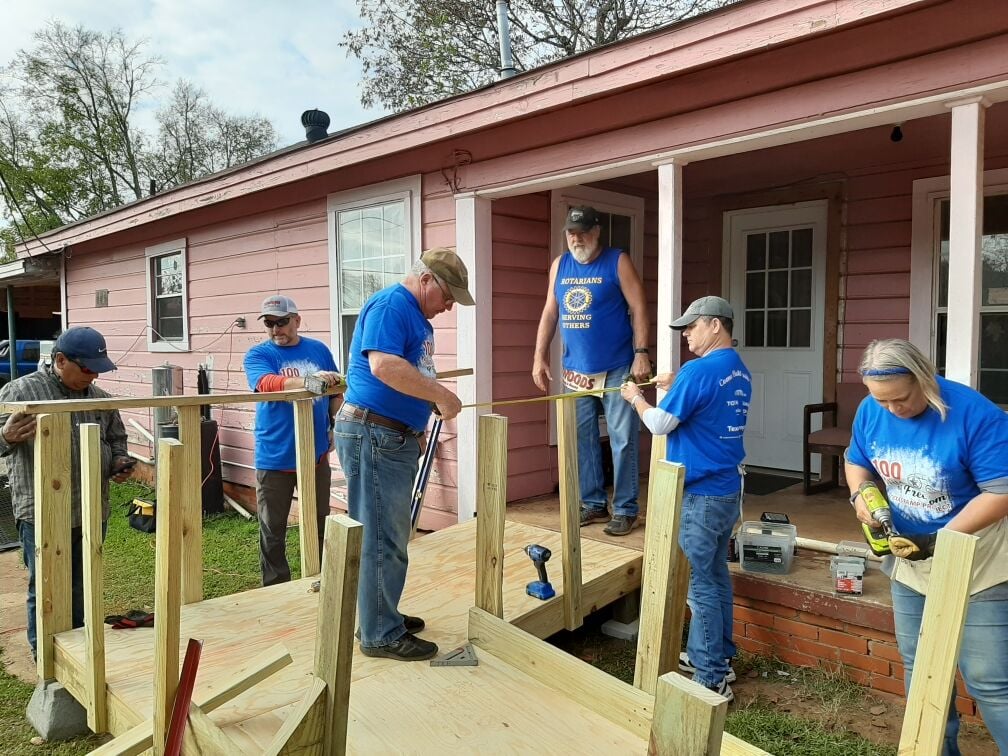 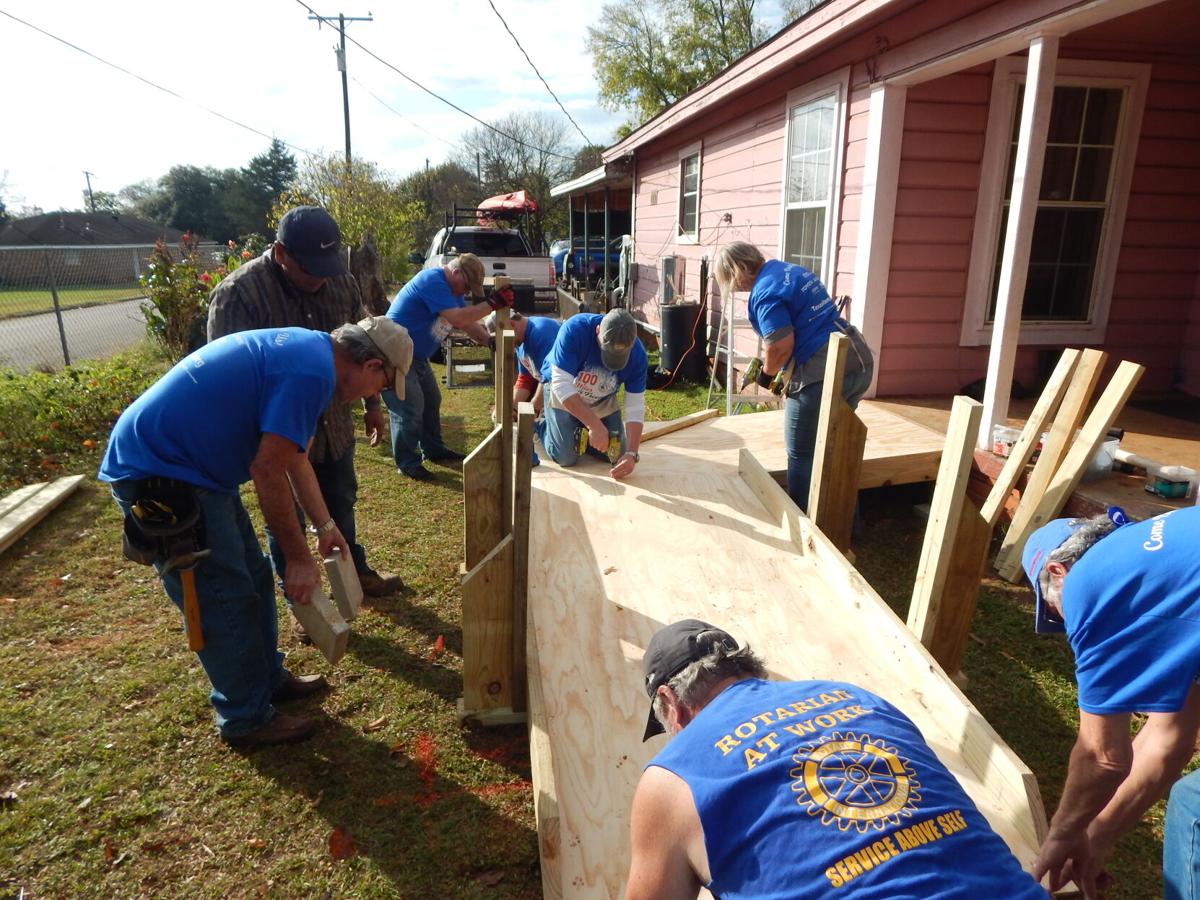 The larger than average volunteer work crew was due to the celebration of Texas Ramp Project’s “100 Miles of Freedom.” 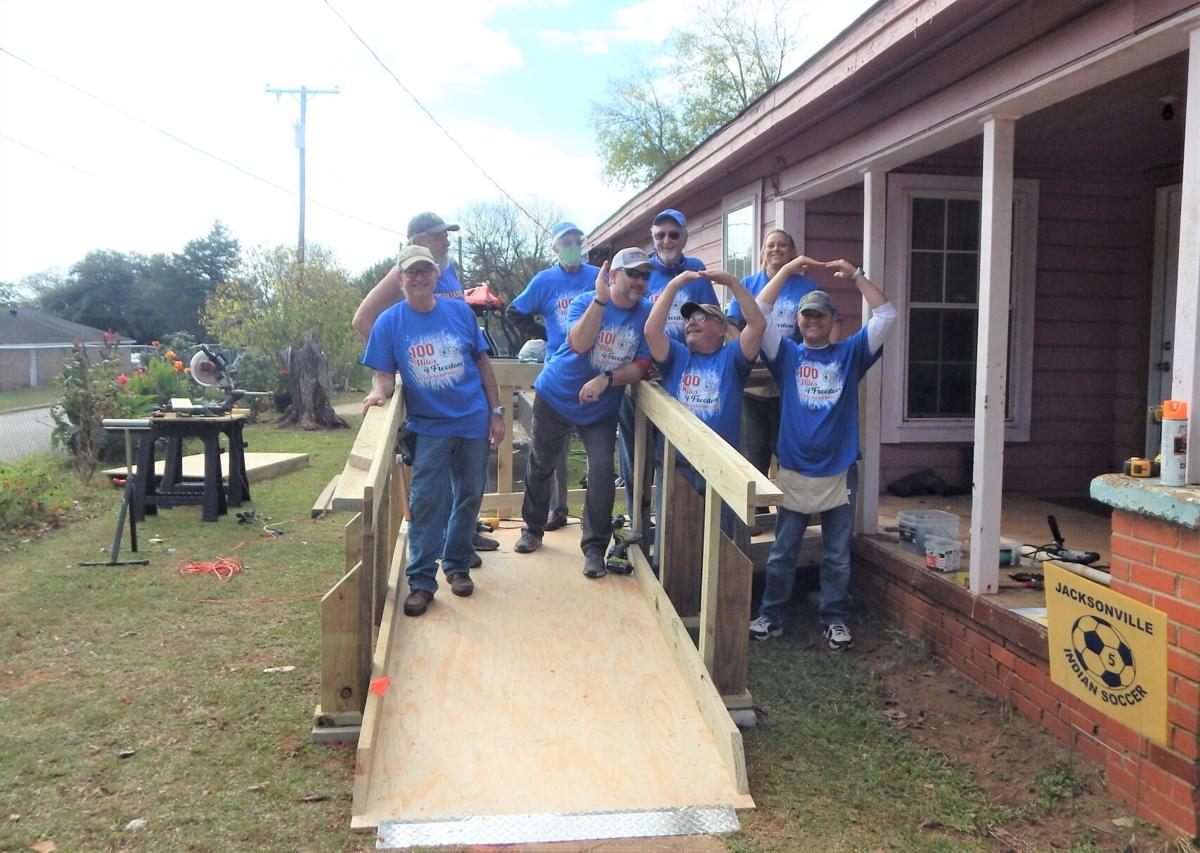 The larger than average volunteer work crew was due to the celebration of Texas Ramp Project’s “100 Miles of Freedom.”

The non-profit group provides wheelchair ramps, free of cost, to those in financial need. Their vision statement is “No Texas resident shall lack access because of financial limitations.” Nearly 20,000 recipients across the state, older adults and those with disabilities, have been given wheelchair access to their homes through Texas Ramps Project.

The “100 Miles of Freedom” milestone was achieved through the dedication of 3,500 plus volunteers.

Jerry Halpain is the Jacksonville Area Coordinator who organizes volunteer work teams in a three-county region which includes Anderson, Cherokee and Rusk.

Although individuals can sign up as volunteers on the organization’s website, he finds local volunteers for the work through churches and civic groups like the Rotary, Lion’s Club and Kiwanis.

“Eventually you get someone who wants to work,” Halpain said.

Local volunteers worked on a project in Jacksonville Saturday, Nov. 21, representing First United Methodist Church, Templo Senda De Luz, Kiwanis and the Lion’s Club. There was a larger than normal crew, according to Halpain, as the build was a part of the “100 Miles of Freedom” celebration.

Due to limited funding, the organization is currently capable of fulfilling only about 40 percent of ramp requests.

“We’re getting better, it used to be 30,” said Jerry Halpain. “Every year we try to increase. We’ll probably never get to 100 percent because there’s always so many putting in, there’s always a backlog.”

“I try to keep up with the paperwork, order the materials and come out to work,” Halpain said.

“I receive all the referrals. We do what’s called a survey. We go out and look at the site and decide where it’s going to be and how much in materials we’re going to use and I order the materials.”

Halpain stated the Jacksonville College has donated a space for the group to use as warehouse. Often portions of the ramp are built at the warehouse prior to arrival on site in order to save time during installation. The average size ramp, 24-32 feet, can be constructed in three to four hours, according to Halpain.

The cost to Texas Ramp Project for an individual ramp is approximately $700-$800, or about one-third of that of a retail contractor installation. The costs are kept low due to the volunteer hours of workers.

Halpain stated he purchases supplies through Harry’s Building Materials who gives the organization a “generous discount.” He figures with the discount provided it amounted to getting the material for every six ramp for free.

Ramps constructed by Texas Ramp Project volunteers, if laid end to end, would be more than enough to span the distance from Dallas to Waco.

The Texas Ramp Project can be found online at texasramps.org.