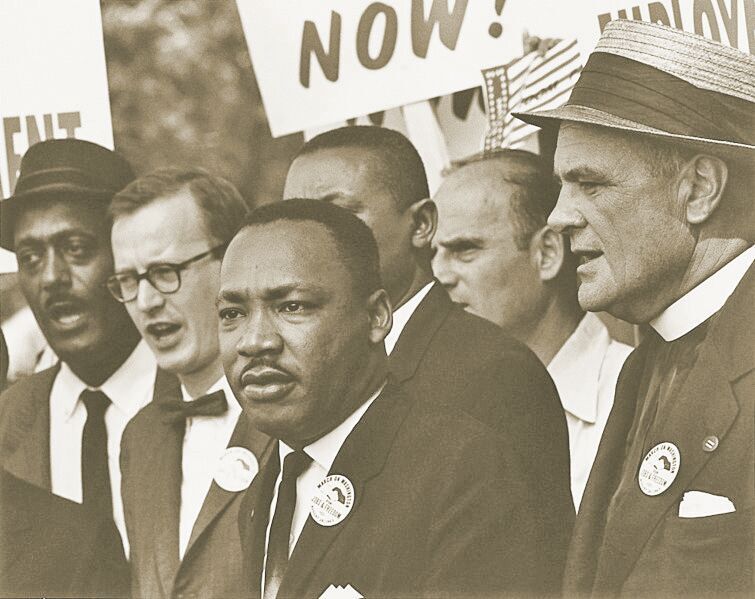 Martin Luther King Jr. during the 1963 March on Washington for Jobs and Freedom, during which he delivered his historic ‘I Have a Dream’ speech, calling for an end to racism. 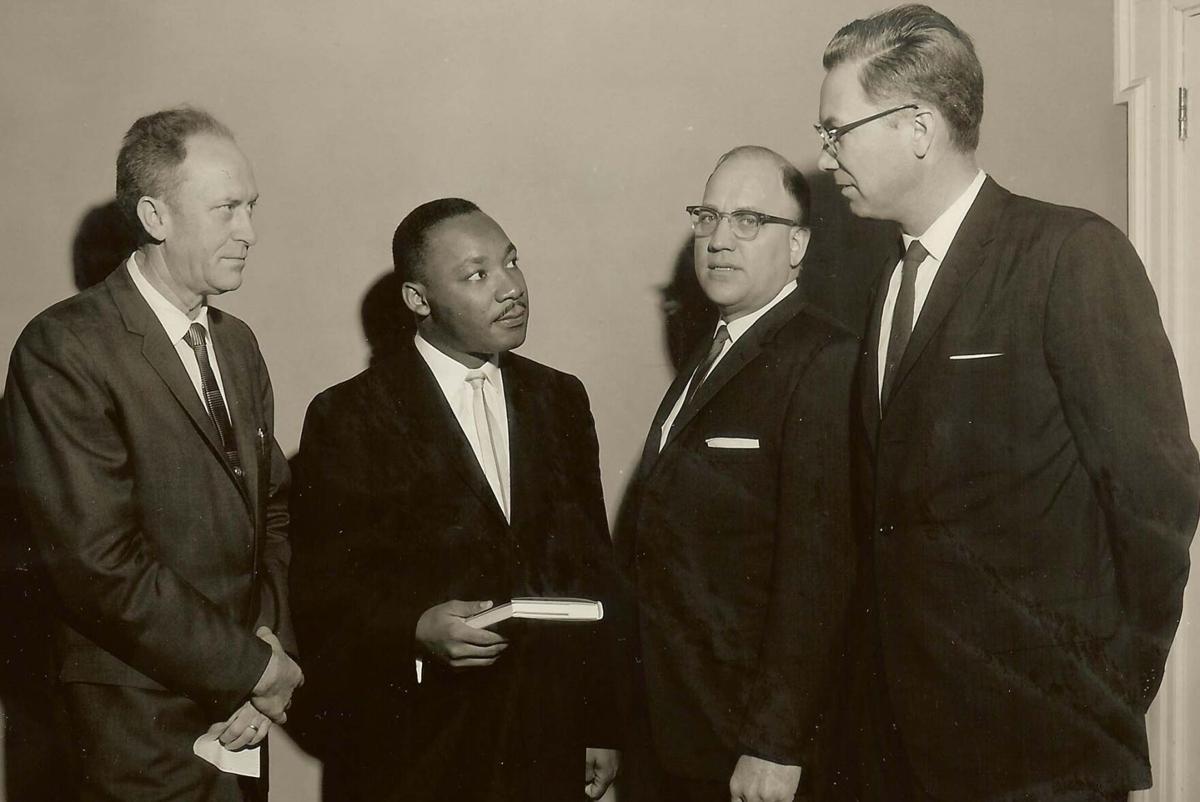 Martin Luther King Jr. preached in Southern Seminary chapel in 1961 to a warm reception by faculty and students. King met with professors (from left to right) Henlee Barnette, Nolan Howington and Allen Graves.

Martin Luther King Jr. during the 1963 March on Washington for Jobs and Freedom, during which he delivered his historic ‘I Have a Dream’ speech, calling for an end to racism.

Martin Luther King Jr. preached in Southern Seminary chapel in 1961 to a warm reception by faculty and students. King met with professors (from left to right) Henlee Barnette, Nolan Howington and Allen Graves.

Martin Luther King, Jr. was a Baptist minister and a prominent civil rights leader from the 1950s until his assassination in 1968. The end of legal segregation of African Americans in the United States was due in large part to his activism and leadership. King also played a role in the creation of the Civil Rights Act of 1964 and the Voting Rights Act of 1965.

King was born as Michael in Atlanta on January 15, 1929 to Martin King Sr., and Alberta Williams King. He had two siblings, an older sister named Christine, and a younger brother named Alfred Daniel Williams King.

When King was only five, his father changed both their names to Martin Luther King. The move followed a trip to Germany by the elder King where he was inspired by the Protestant Reformation leader.

King grew up in a middle-class family on Auburn Avenue, also known as “Sweet Auburn,” home to some of the most prominent and prosperous African-American churches and businesses just prior to the civil rights movement.

A gifted student, King attended Booker T. Washington High School, skipping two grades. He enrolled in Morehouse College in 1944 at the age of 15. Although this was the alma mater of both his father and maternal grandfather, who were Baptist ministers, King had not intended to follow path. Originally studying medicine and law, King did not chose the ministry until his senior year at Morehouse.

Following his graduation from Morehouse in 1948, where he earned a degree in sociology, King attended Crozier Theological Seminary in Chester, Pennsylvania. He earned a bachelor of divinity degree in 1951, graduating as valedictorian of his class. He then earned a doctoroate in 1955 from Boston University.

It was during his work on his doctorate that King met his future wife Coretta Scott. The two were married in June 1953. The couple had four children, Yolanda, Martin Luther King III, Dexter Scott and Bernice.

In 1955, at the age of 25, King became pastor of the Dexter Avenue Baptist Church of Montgomery, Alabama.

In December of the same year, Rosetta Parks, an African American woman, refused to give her seat to a white man on a Montgomery bus. She was consequently arrested, found guilty and fined $10. However, on the night of Parks’ arrest the head of the local NAACP chapter met with King and other local civil rights leaders. Their purpose – plan a boycott of the Montgomery Bus.

Due to his youth and professional standing, as well as the fact that he was relatively new to the community and therefore had few enemies, King was chosen to lead the boycott. The boycott lasted just over a year and King remained dedicated to the cause despite his own home being dynamited. The Montgomery public transit system and downtown business owners suffered economic strain due to the boycott which, along with legal action taken by the African American community, eventually led to the city lifting the law mandating the segregation of public transportation.

Following the success of the Montgomery bus boycott, King, along with 61 other ministers, founded the Southern Christian Leadership Conference in an effort to organize the power of Black churches. The organization gave King a base from which to operate, as well as a national platform. In an effort to give African Americans a voice, the association sponsored mass meetings in key southern cities, registering Black voters.

In 1960, King moved his family to his native city of Atlanta, joining his father as co-pastor of Ebeneezer Baptist Church.

A group of African American students in North Carolina began the Greensboro-sit-in movement in February 1960. The students would sit a segregated lunch counters and refuse to move when asked to leave or sit in the colored section. This often led to verbal and even physical abuse, yet the movement gained traction in other cities. In April, King was part of a SCLC led conference at Shaw University in Raleigh, North Carolina with local sit-in leaders. He encouraged the continual use of nonviolent methods. In October, the commitment to non-violence was tested. King, along with 75 students, entered a local department store requesting lunch-counter service. When service was denied and the group refused to leave, King and 36 others were arrested.

Recognizing King’s growing status and not wanting to hurt the city’s reputation, Atlanta’s mayor negotiated a truce and charges were dropped. However, King was imprisoned for violating his probation on a traffic conviction.

The news of King’s imprisonment reached John F. Kennedy during the time of his presidential campaign. Kennedy called Coretta Scott King, expressing his concern for King’s treatment. Political pressure was applied and King was soon released.

The action was widely publicized and believed by some to have contributed to Kennedy’s narrow victory over President Dwight D. Eisenhower eight days later.

In 1963, King organized a campaign in Birmingham, Alabama, where entire families attended. Police turned dogs and fire hoses on the demonstrators and King was jailed with many of his supporters. The event drew the attention of the nation.

Writing from jail, King stated, “Nonviolent direct action seeks to create such a crisis and foster such tension that a community which has constantly refused to negotiate is forced to confront the issue.”

The writing was a response to white clergymen who had earlier criticized King’s tactics and urged African Americans not to support the demonstrations.

By the time the Birmingham campaign had closed, King had joined other civil rights leaders in organizing the March on Washington, which took place August 28, 1963. More than 200,000 people gathered in a peaceful, interracial assembly at the Lincoln Memorial and King delivered his “I Have a Dream” speech.

1964 could be considered a banner year for King. He was named “Man of the Year” by Time magazine, was awarded the Nobel Peace Prize and saw the passage of the Civil Rights Act, which allowed the federal government to enforce desegregation of public accommodations and outlawing discrimination in publicly owned facilities and employment.

Although he was not a part of the March 7 march, King had organized the event and was determined to participate in the next one. With a restraining order in place preventing another march, King nonetheless led a group of both Black and white marchers to Pettus Bridge. Rather than forcing a confrontation, King and his followers knelt in prayer and then turned back.

The peaceful protest may likely have caused King to lose the support of more militant-minded activists who questioned his non-violent approach and considered his methods too weak.

On March 21, another march from Selma to Montgomery began. Beginning with 2,000 participants, the numbers swelled to an estimated 25,000 by the time the marchers gathered in front of the state capital on March 25 where King delivered a televised speech. Just five months later, President Johnson signed the 1965 Voting Rights Act.

From the later part of 1965 through 1967 King’s efforts expanded into larger cities in the United States, including Chicago and Los Angeles.

By 1968, King was beginning to weary from the years of demonstrations and confrontations he’d experienced and the slow pace of progress. Despite the strain, King was planning another march on Washington. In the spring, King was drawn to a labor strike by Memphis sanitation workers.

On April 3, King delivered his final speech, one which some have termed prophetic. Addressing the crowd at Mason Temple Church in Memphis, King said, “I’ve seen the promised land. I may not get there with you. But I want you to know tonight that we, as a people, will get to the promised land.”

It was the next day King was struck down by a sniper’s bullet while standing on the second-story balcony of his hotel room. James Earl Ray, the alleged assassin, pleaded guilty and was convicted and sentenced to 99 years in prison.

Ray later recanted his confession, stating he was the victim of a conspiracy and had been coerced by his lawyers into confessing. Surprisingly, members of King’s family eventually came to Ray’s defense.

Several investigations were conducted by the U.S. government, each concluding Ray was the sole assassin of Martin Luther King, Jr.

King is remembered annually on the third Monday of January, Martin Luther King Day. The bill creating the U.S. federal holiday honoring King was signed into law by President Ronald Reagan in 1983, following years of campaigning by activists. Martin Luther King Day was first observed in 1986.

Resources used for this feature include articles from History.com, Biography.com and Britannica.com.