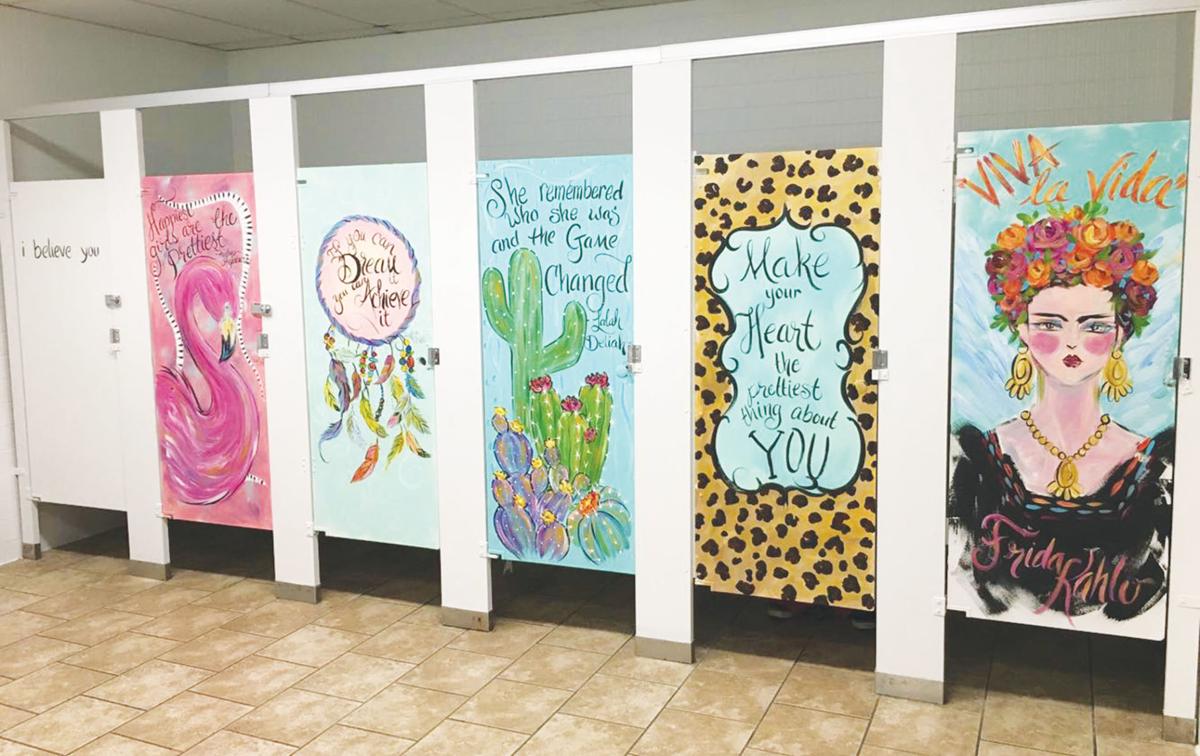 Newly decorated stall doors appear as a gallery of art in the girls’ restroom at Rusk High School, inspired by student suggestions. 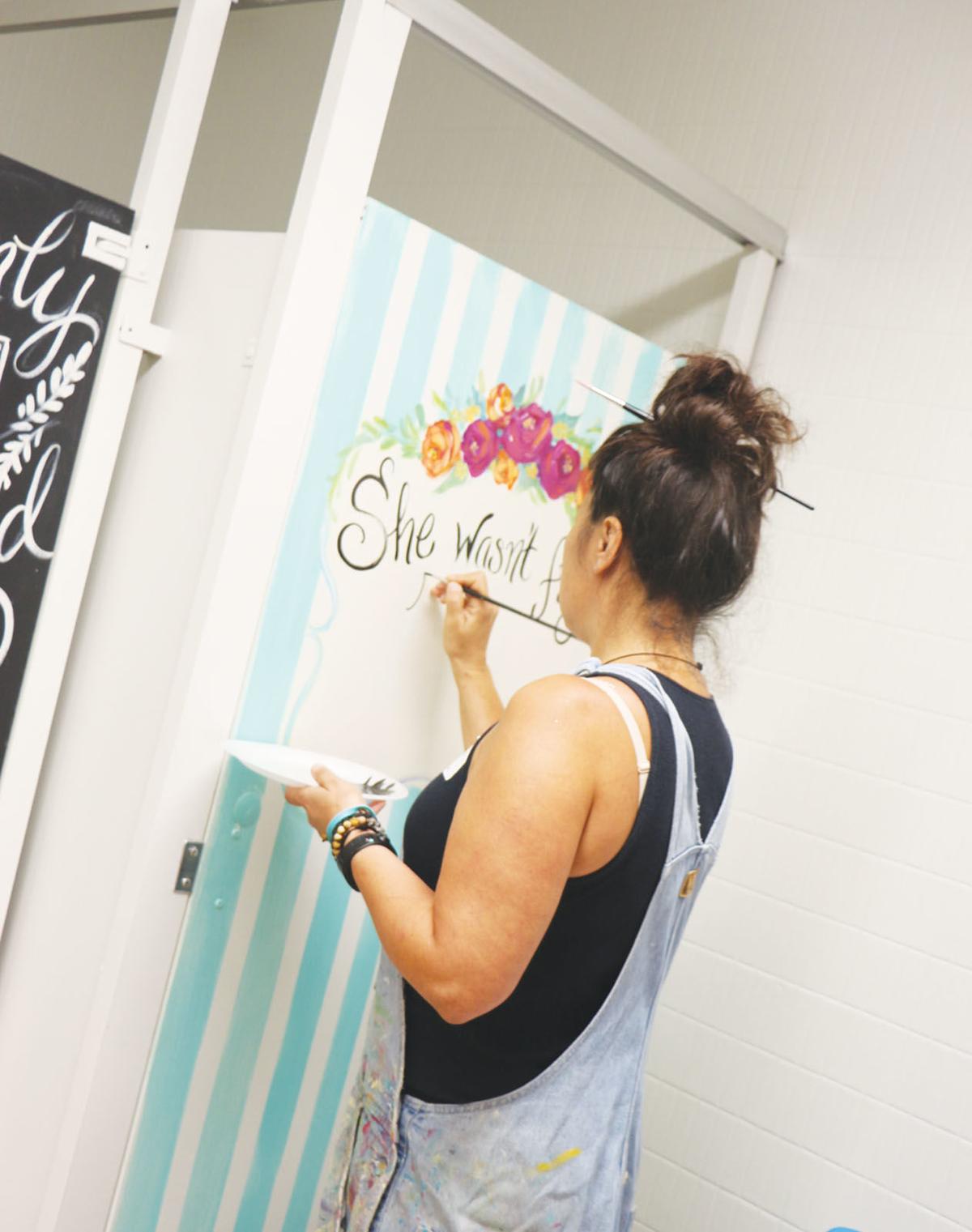 Newly decorated stall doors appear as a gallery of art in the girls’ restroom at Rusk High School, inspired by student suggestions.

RUSK – A simple plea to beautify the girls restrooms at the local high school campus has blossomed into a project that not only brings smiles, but a sense of affirmation, too.

“I was speaking to one of our students, asking her what could I do to make her smile because she did not look happy,” recalled Rusk High School principal Ronny Snow. “She said, 'Well, you could start by painting the bathroom.' ”

He immediately agreed, telling her “it was something I would have never thought of. And she began to break into a big smile!” he said.

Kenzie Bixler, the sophomore/junior class counselor, came aboard the project when the principal described his discussion with the young woman, and “I immediately knew who I had to get to help with the project: Michelle Filer, a local artisan, soap maker and goat owner.”

The women had worked together on a project at the Cherokee Civic Theatre, Bixler said, and soon they were mapping out a plan to beautify the girls' restrooms at the high school campus.

A stack of sticky notes and a pen were left for the young women to share suggested quotes “they thought would be empowering to their peers,” Filer, an Alto resident, said. “We used four quotes that the girls had suggested.”

Another quote, surrounding the bathroom mirror, “was actually written on the mirror when I first went in – I thought if some girl thought it was important to put on there, then we must honor that and paint it around the mirror,” she said.

Using scrolled black letters, bordered by golden curlicues and feathers, with a crown set atop the image, Filer incorporated the phrase “We aren't perfect but oh so beautiful” around the mirror located above a set of sinks.

Nearby, painted stall doors create a colorful gallery that is a blend of images and quotes, with each door bearing its own theme.

While her first response to Bixler's invitation to help with the project was pure enthusiasm – “a few months before, I had seen something similar on Facebook and had said to myself if I ever got an opportunity to do this, I would do it for free (because) I felt it was such an important project to empower our girls” – Filer said this is the first project of its kind that she has undertaken, “and I had no idea what I was going to paint on the doors until the day I went in to paint.”

The three-day project entailed decorating around the one mirror and 11 doors, with the finished work drawing positive response from the campus and beyond.

“The response from the girls was so amazing, and I really fed off their excitement and energy,” Filer said. “When (they) asked what I was doing and why, I told them, 'Y’all asked for the girls bathroom to be painted, so Mr. Snow and Mrs. Bixler asked me to come in.' Their response was disbelief that they had actually been heard – 'They heard us? Someone heard us?'”

The young women's favorite? “Real queens fix each others' crowns,” according to Filer.

One door, however stands out for its stark simplicity and powerful, three-word message painted in black against a white stall door.

“The last door I painted had me stuck – I could not bring myself to paint it even a solid color (so she could) go in the next day and put a design on it,” she admitted. However, the answer came when she arrived home that evening.

“It came to me what I should do on it, (and) I knew it would be risky, but when the whole job was completed and the principal and some of the teachers walked through, one teacher looked at it, then said 'This one! This one is the most important!!' I knew I had done what I set out to do,” she said.

That message? “I believe you.”

Images of the decorated bathroom have gone viral on social media, “even shared in Europe by the end of the first day,” Filer said, adding that “the response from this one door alone (“I believe you”) from women all over the world hit me so hard emotionally. I received messages for a week on how women needed to hear this message when they were in school.”

The impact of that one student's suggestion, and Filer's bringing the idea to fruition has been phenomenal, Bixler said.

“Who would've ever thought that painting restroom stalls could be so powerful?” she asked.

Added Snow, “I think the morale from the the project has been very helpful for our students, and we do plan on more paintings in the restrooms.”

The students' enthusiasm has “really incited me to continue this project because I saw how truly important it was to these girls,” said Filer, who is now looking to partner with five area schools to take the project to their campuses, using grant funding to pay for supplies. “I believe in this project so strongly and from my heart that I could not accept money for this.”

She credits Snow and Bixler for putting her on a path that can help make a difference in the lives of students with a few strokes of a paintbrush and empowering messages in the least expected place: A restroom.

“I was very fortunate that Mr. Snow had put so much trust in me, and I am grateful to him and Mrs. Bixler to allow me to send out a message of love and positivity to our world,”

Snow, who began his first year this year as the Rusk High School principal, said he has been turning to the students for input on how to bring positive change to their campus. “I wanted them to feel like they have a voice in their campus,” he said.

The high school now has a 10-member Student Advisory Council elected by their peers who bring their ideas to him for discussion, and they “have amazed me with their ideas and input on things,” he said. “They think of things that I would have never thought of.”

One idea was to implement a reserved student section called “the Nest” for home football games. “This provided an immediate boost against Henderson last week (that was) noticed by many,” he said, adding that other suggestions dealt with additional vending machines in the common area and creating more space there by removing tables, as well as painting the boys' restroom.

“They brought up other topics that I can't change, but I can explain why it is that way; why it goes even beyond my control,” allowing them an understanding of how the district operates, he said.