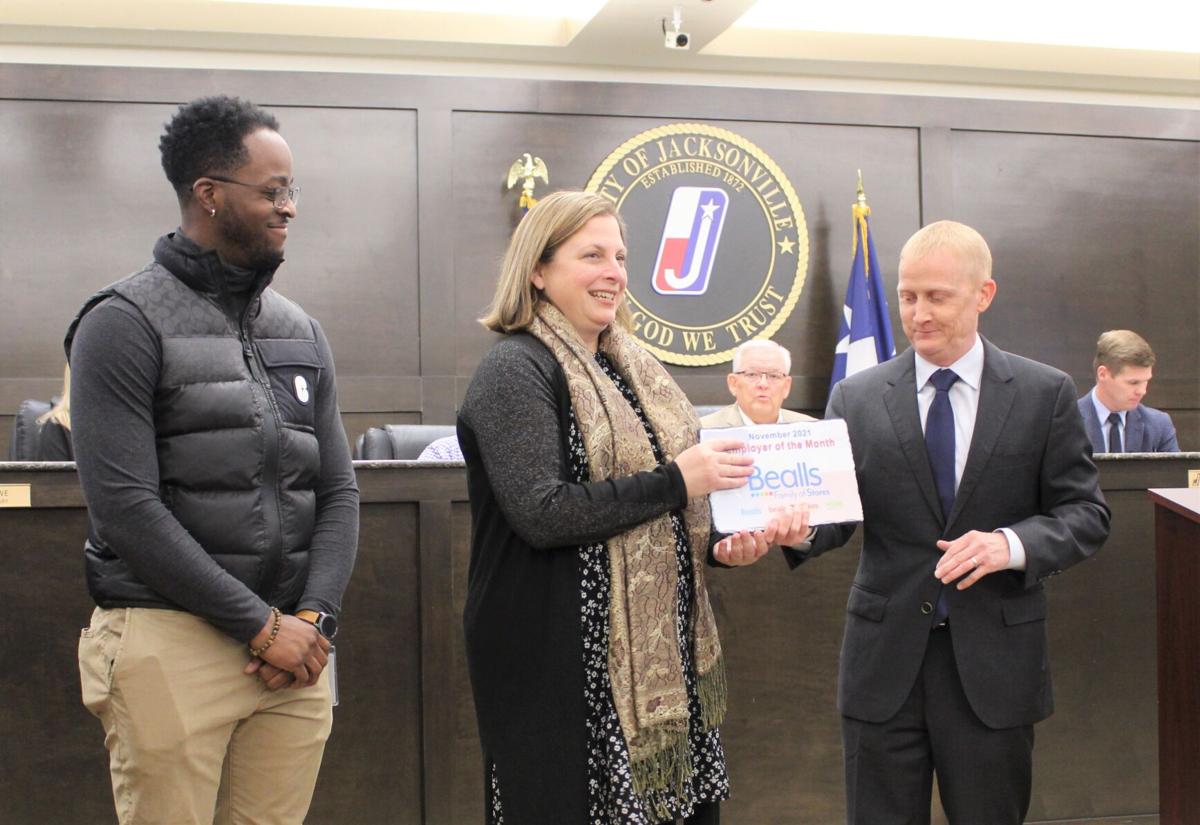 JEDCO President Shane Pace presents the Employer of the Month award to Bealls. Accepting for the company were Everett Graham, II and Melanie Stern. 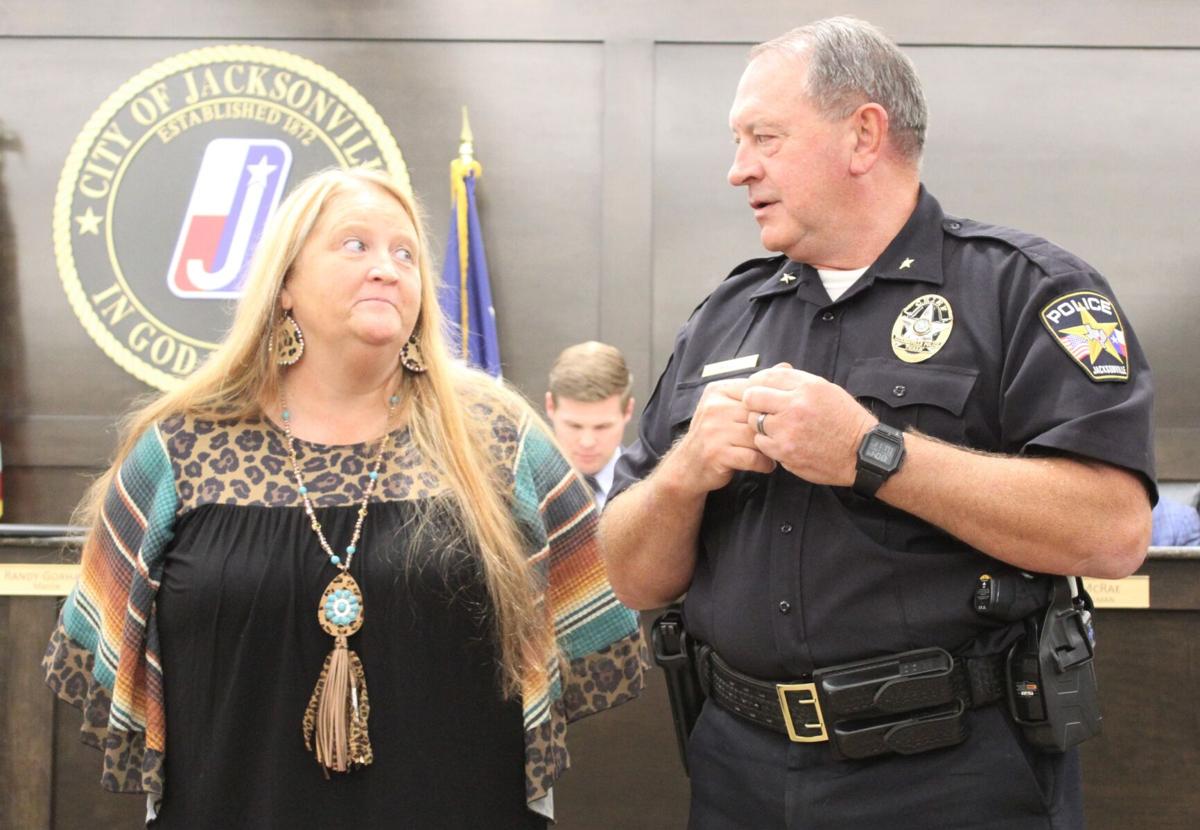 Jacksonville Police Chief Joe Williams announces Rhonda Ray’s retirement and commends her on her 30 years with the department. 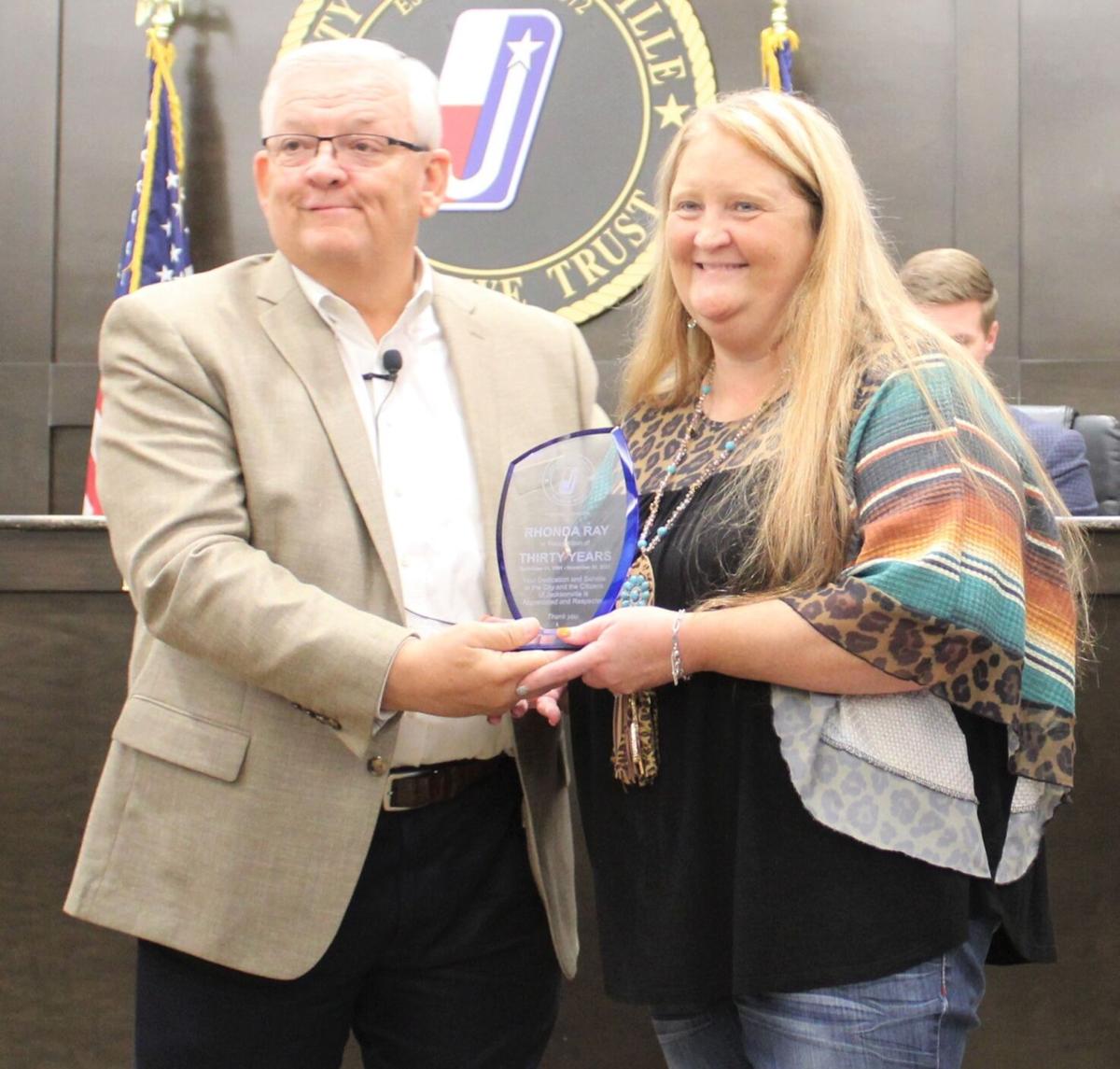 Mayor Randy Gorham presents Rhonda Ray with a plaque recognizing her 30 years of service to the city.

JEDCO President Shane Pace presents the Employer of the Month award to Bealls. Accepting for the company were Everett Graham, II and Melanie Stern.

Jacksonville Police Chief Joe Williams announces Rhonda Ray’s retirement and commends her on her 30 years with the department.

Mayor Randy Gorham presents Rhonda Ray with a plaque recognizing her 30 years of service to the city.

A resolution was passed by the Jacksonville city council to publicize the city’s intent to issue certificates of obligation to finance a street repair and infrastructure project. Owing to the fact that a comprehensive street repair and infrastructure plan has not been fully developed, the council elected to forego the issuance of the certificates of obligation under the current notice of intent.

“As we got into that project, it came to our attention through Robert Haberle’s company, they have a computer software program that they can put inside a car that can tell us more about, structurally, what’s going on with the streets,” Rob Gowin, Councilman District 4.

He explained the program would inform whether a road could simply be repaved or needed to be rebuilt.

A resolution in support of a compensation and classification study was also passed.

“We’re losing good people to the private sector and we’re losing good people to other public entities in the region,” said James Hubbard, Jacksonville City Manager. “So this is an effort that we’re asking for your formal support for the approval of this resolution to work with Paypoint HR, they’re a firm out of Maryland, over the next about 16 weeks to really take a look at the classification of our employees, which has to do with their job descriptions, to make sure that what it says on paper is what their actually doing, and assign some kind of pay grade system and then work through a compensation strategy and policy compared to market.”

The resolution indicates the council’s support and commitment to offer competitive compensation and benefits to city employees.

A third resolution approved by council authorized the filing of an application for financial assistance through the Texas Water Development Board to repair infrastructure.

“It’s not binding. If at any point we don’t want to accept the terms of accepting the financing, we don’t have to do that,” Hubbard said.

“We’re planning the 1.5 mile replacement of the sanitary sewer line extending roughly from South Bolton, across US-69 and tying in to existing section of pipe over near Nichols Green Park.”

Hubbard was approved as the replacement of former City Manger Greg Smith as the authorized official on the communications upgrade grant.

A four-foot variance was requested by Marc Hoster in order to build piers within two feet of his property line on his lake lease lot on CR 3108. The variance affects his southern property line and the neighbors on that side were reportedly had no objections to the request.

“We’re just widening. We’re not encroaching any further out into the cove and we’re not going to the north to impact the new neighbors there,” Hoster said.

The requested variance was authorized.

Although the council nominated two individuals for the Cherokee County Appraisal Board, they chose to cast all their ballots for Joe Ballard. The decision was made knowing he had also been nominated by the Cherokee County commissioners. It was hoped the city’s votes, combined with possibly some from the commissioners, the city would have at least one representative on the board which they had nominated.

The consent agenda was approved in whole and included:

• Janice Arp’s appointment as Commissioner to the Jacksonville Housing Authority;

• The certified tax roll as submitt4ed by Cherokee County Appraisal District; and

• 2022 holiday calendar for all city employees.

The council addressed a single item out of executive session, authorizing the city attorney and city manager to negotiate a lease amendment with Republic Services regarding the landfill.

Among the special presentations was the announcement of Bealls as Employer of the Month by Shane Pace, President of Jacksonville Economic Development Corporation.

“They’re employing approximately 400 people right now. They have plans to expand and almost double that employment number, add some additional square footage,” Pace said. “These are the types of employers that we’re really looking for in the city of Jacksonville. It’s important that we continue to support families and allow people to live and work here and stay here after they graduate high school and college.”

“Thank you so much for this. We’re genuinely grateful to have found a new home in Jacksonville,” Stern said.

Rhonda Ray was honored for her 30 years of service to the city.

“She started in ‘91 as a dispatcher,” Police Chief Joe Williams said. “She pushed the buttons for a couple of years and then had an opportunity to go into CID, which is our Criminal Investigations Division, and work there as an administrator.”

“We’re going to be sad to see her go,” Williams said.

Mayor Randy Gorham presented Ray with a plaque in recognition of her service.

Roxanna Briley, the city’s finance director, was recognized for the city receiving the Distinguished Budget Presentation Award. Gorham noted it was the fifth year in a row that the city had earned the distinction.

During the city manager’s report, Hubbard commended the Jacksonville community for their reaction to the late October boil water notice. He also thanked the city crew who completed the repairs.

“It was system wide,” Hubbard said. “It was definitely a battle, but that our crew has handled expeditiously and very well.”

Hubbard informed those present the animal shelter would be operating under new public hours beginning Monday, Nov. 15. New hours are 10 a.m.-4 p.m. Monday-Friday and 8 a.m. until 12 p.m. on Saturday. The shelter is closed on Sundays.

An update on the Public Safety Complex indicated there may be a celebration of completion in early 2022, with community tours provided.