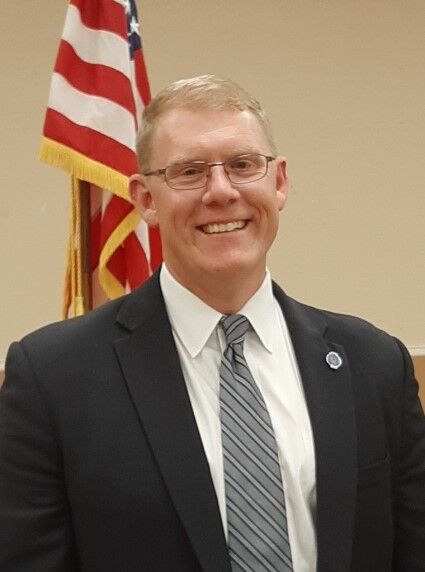 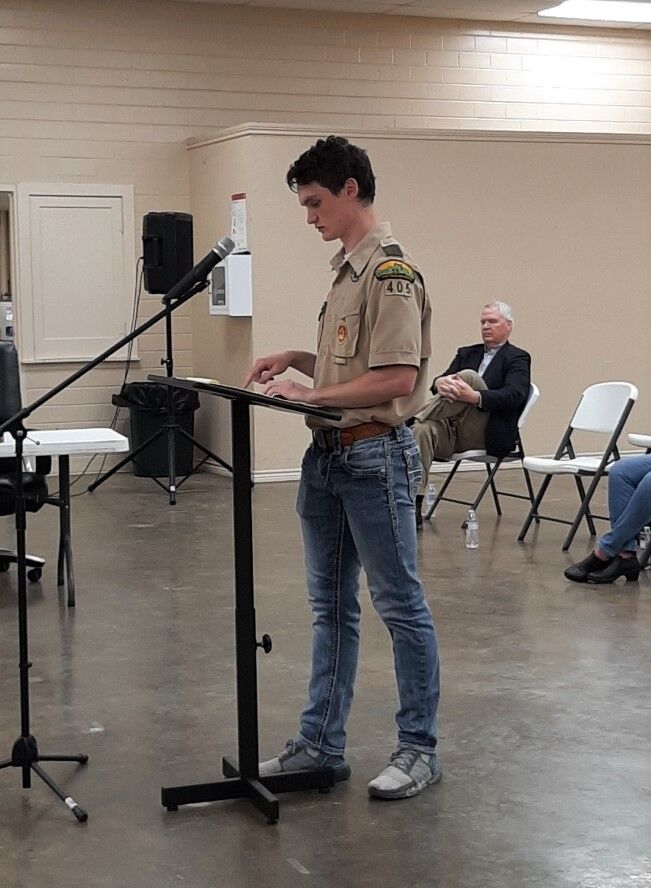 Peyton Wallace presents his proposal to the city council for his Eagle Scout project. Wallace was approved for providing necessary labor to replace the two basketball goals on the court located at the city’s swimming pool complex.

Peyton Wallace presents his proposal to the city council for his Eagle Scout project. Wallace was approved for providing necessary labor to replace the two basketball goals on the court located at the city’s swimming pool complex.

Council authorized Peyton Wallace’s proposed Eagle Scout project, at a cost up to $5,000 for materials. Wallace will provide the labor to replace the two goals on the basketball court at the city’s pool complex, located at 555 Euclid Street. He stated he will begin the work as soon as the necessary materials are on hand, in hopes of having the new goals in place for summer use.

In two related items, council selected Traylor and Associates for administrative and planning and Stephens Engineering to provide services related to Texas Community Development Block Grants received by the city. The purpose of the grants is to provide for the paving of city roads in low-income areas.

In requesting bids for cemetery maintenance, the city received a single bid from the current provider which was approved at the current rate and maintenance requirements.

A donation of land from the Frazier family was again on the agenda. The family wanted to donate a piece of land adjacent to the cemetery. It was stated the family desired an answer more definitive than no action was taken.

The land in question is reportedly overgrown and there is a possibility of unknown graves which would necessitate cleanup of the property and care for the graves. The council declined the donation, citing the potential liability to the city.

During the meeting, it was noted the swimming pool tends to lose money annually and even with outsourcing management of the pool, there were many associated costs for which the city would be responsible.

Mayor Angela Raiborn said she believed the city pool was a quality of life issue.

Ideas for cutting costs were discussed, including potentially limiting the days or hours of use, or closing the pool and spending money on other forms of recreation.

Resident Ken Ferrara, addressing the council, suggested closing the pool, developing a plan and saving money towards a decent, normal-sized pool with an enlarged splash pad. Another suggestion he offered was for the city to provide a set amount of money per person to Jake McMullen of the KOA to allow residents to use the pool there. This would eliminate the cost of providing water, lifeguards and other necessities related to the pool.

Jack McMullen said he would be glad to work with the city to provide pool service.

The council tabled the item in favor of holding a special session to discuss pool management ideas with the lone individual who submitted a proposal before making a decision.

The council chose to hold a workshop to discuss the proposed increase in water rates. An option to allow a sliding scale rate based on water usage was proposed. This was recommended to create a fairer burden to consumers, opposed to an across the board increase.

This item was also tabled and will be placed on the next meeting agenda.

City Secretary Cinda Etheridge announced early voting begins April 19. This election is only for District 1 council member, as there are no other contested races.

Councilman Walter Sessions noted there would be no Juneteenth celebration this year due to continued coronavirus concerns. Raiborn mentioned the National Day of Prayer is scheduled for June 6, with a possible gathering at the courthouse that day.