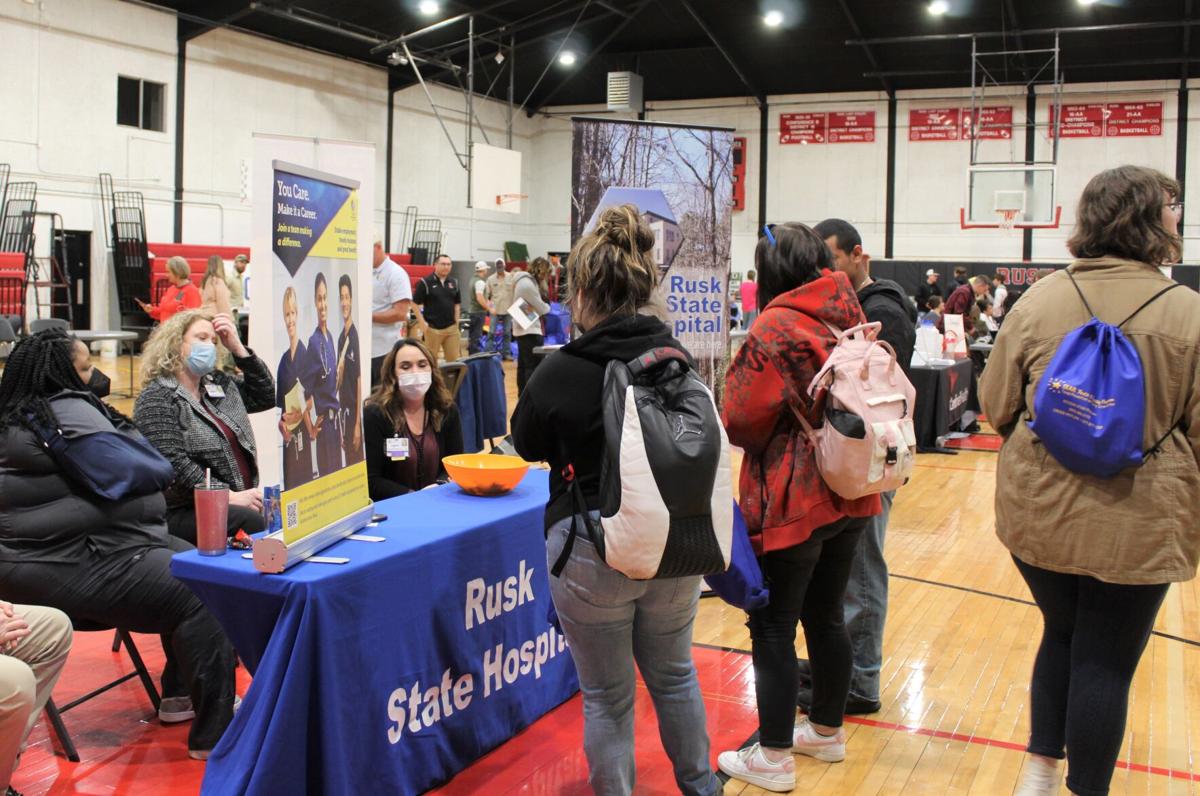 The Rusk State Hospital was represented at the Rusk Career Fair, along with numerous other local and area businesses. 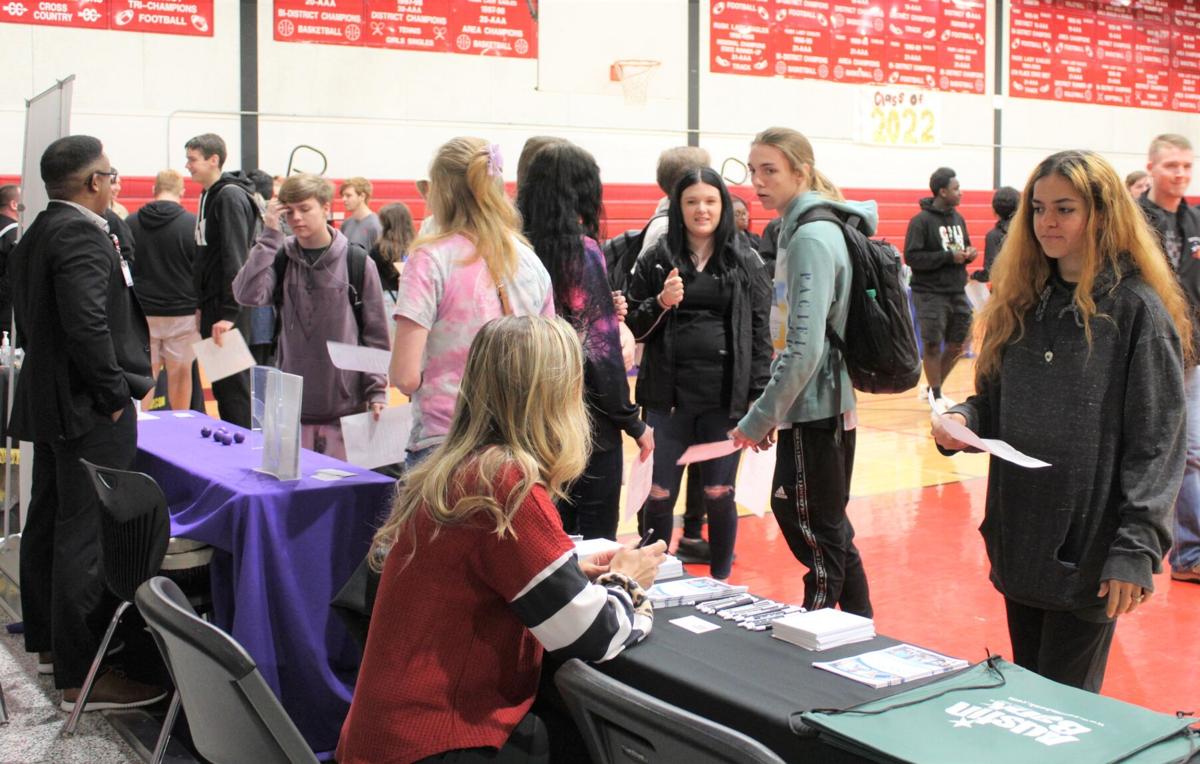 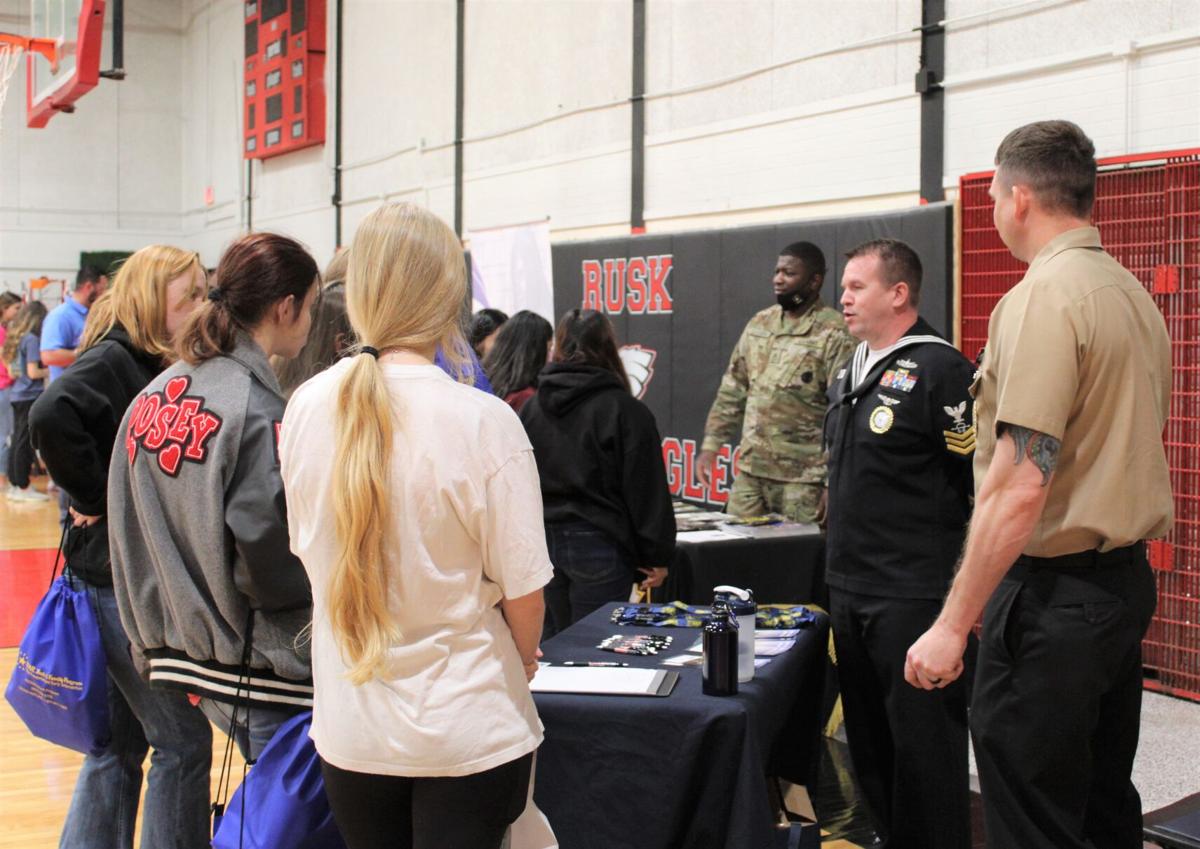 Army and Navy recruiters were present at the Rusk Career Fair.

The Rusk State Hospital was represented at the Rusk Career Fair, along with numerous other local and area businesses.

Army and Navy recruiters were present at the Rusk Career Fair.

The first such event took place in 2019 with the 2020 fair being canceled due to coronavirus concerns, according to Crawford Hayes, College and Career Coordinator and organizer of the Career Fair.

Hayes said he believed the fair raised awareness about local and area positions available, as well as the various paths certain college degrees could provide.

Senior Jenna Goodwin plans to attend UT Tyler before attending the university’s medical school, set to be built in 2023. She said her aunt, a nurse, served as her inspiration. Goodwin has already taken steps into the medical field.

“We’re going to be taking our test to be certified as CNA at the end of the school year in May,” Goodwin said.

Having visited two medical booths and seeing the other participating industries Goodwin said the fair has confirmed her decision. Although already decided, she believes the fair is a good idea.

MaKenna Burkhalter, another senior who has decided on a career path, also believes the fair to be beneficial.

“A lot of people, my age especially, still don’t know what they want to do with their lives,” Burkhalter said. “I didn’t come to a firm answer until recently so, I think, for the people who are still looking for different job opportunities, this is really good exposure for them to see what all is out there.”

Her own plan is to enter the dental field either as a hygienist or dentist, one she said was confirmed by her attendance at the fair.

Vendors obviously see the fair as an opportunity to recruit new employees. One such individual was Brian Crawford, a recruiter for Christus Health.

Although he had attended career fairs at colleges, he admitted this was his first high school fair.

He believed it was important to identify interested students at age 17 or 18.

“Identify them early and get them introduced into the health care field,” he said. “You’ve got athletic trainers, you’ve got nursing, anything you want to do we can connect you with that avenue and start that career training.”

A big drive, according to Crawford, is the CTE courses now available to high school students.

“The workforce is getting younger and you need to get good candidates who are interested early,” he said.

David Rich, with the Texas Department of Criminal Justice, said not all students will go to college and he was there to make students aware that TDCJ offers job positions to high school graduates.

“Kids that want to go into the workforce, we pay a good wage with state benefits. If they decide to, they can actually make a career out of it,” he said.

He admitted that, even though he grew up in Wells, he hadn’t known the prison existed in Rusk, much less any details regarding employment. His purpose was to raise awareness for others.

While individual businesses may or may not draw immediate interest in any particular field, Game Warden Eric Collins summed up one purpose for attending as a recruiter, “Sometimes you just plant seeds.”