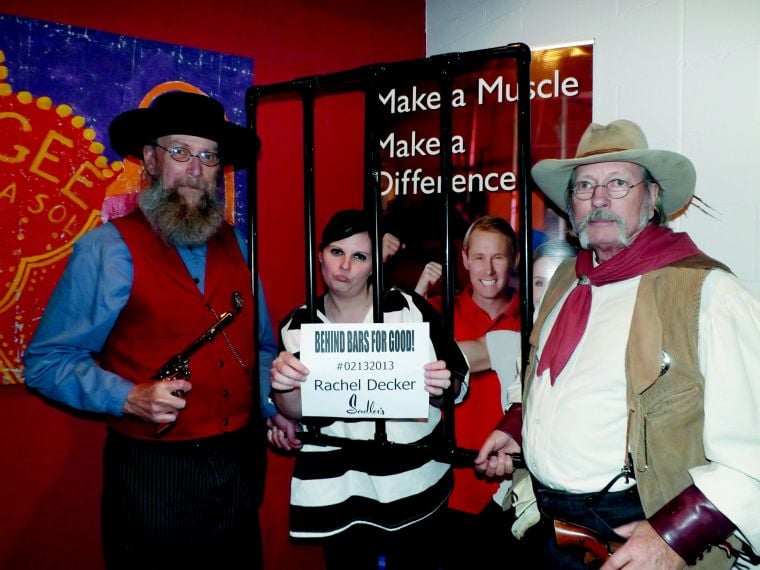 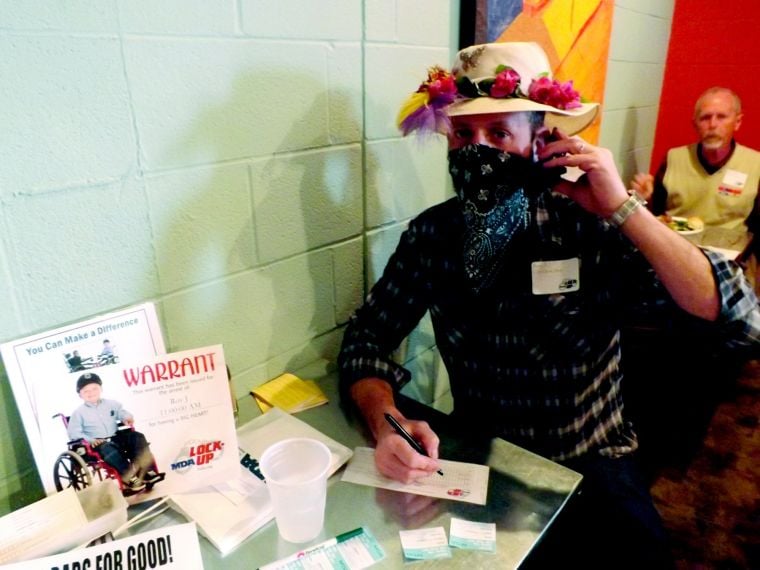 A bandana-bearing bandit – Roy Johnson of CJ's Quick Stop – spends time in the pokey, calling on friends Wednesday to help him make “bail” as part of this year's MDA Lockup.

A bandana-bearing bandit – Roy Johnson of CJ's Quick Stop – spends time in the pokey, calling on friends Wednesday to help him make “bail” as part of this year's MDA Lockup.

Most people will do anything to avoid jail time, but on Wednesday, 30 members of the local business community willingly were led away by arresting “officers” for an hour's stay in the clink, just to help kids with muscular dystrophy.

“The people of Jacksonville have always been supportive of MDA,” said Tiffany Bratcher, area director of the MDA Lock-up event. “We had 30 participants this year, about the same as last year.”

Sadler's was the site of this year's MDA “jail,” a restaurant that, ironically enough, is housed in the former city jail.

After being booked, processed and had his picture taken, bandana-bearing bandit Roy Johnson of CJ's Quick Stop fielded a phone call from a friend, reminding her of the fundraiser.

“I called twice – I have been locked up and I'm trying to raise bail money, can you help me out?” he asked. A moment later, he added, “you've already mailed it in? Well thank you very much, young lady!”

“MDA has been around my whole life; I've got to help Jerry's Kids,” he said of his four-year commitment to the fundraiser. “I've been blessed with five healthy children, and I've never had to deal with anything as devastating as (this disease), so it's my way of giving back.”

Wendy Emprimo of KBJS Radio offered to be a jailbird this year, inspired by a friend in Dallas who works in MDA, “so I know what all is involved, and how they work. And, the money goes to a good cause, so I decided to do it.”

“I'm just asking (friends and family) to donate,” she laughed, saying she might consider bribing folks. “Local people, maybe I can take them some cookies or something later.”

Along with the phone calls, Emprimo said she's spent the past week encouraging people to go online and help raise “bail” money. “I've been doing it online, so people have donated at the website with their credit cards, though I've had friends also who have given me the cash,” she said.

Meanwhile, Kenny Hart, sales manager at the Bill McRae Ford dealership, is counting on a personal touch while raising his bail.

Tapping into the network he's created over the years, Hart said he prefers calling donors because it's “more on a personal basis … I tend to prefer to talk to people on the phone, rather than (reach them through) the internet. I think the personal touch, actually talking to someone one-to-one (is more effective).”

Firefighter James Suggs has served two years as an “arresting officer” for the lock-up, which he called a fun event that participants really get into.

The most comical reactions come “when people don't know that their co-workers have signed them up for this, and then I show up with a warrant for them, and they're unaware of it” or when a participant forgets the actual day of the event, he said.

“We get some pretty strange reactions when we walk in,” he laughed.