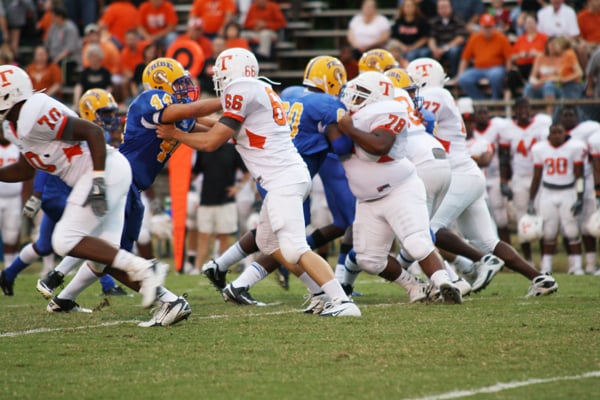 Jacksonville defensive linemen Chase Palmer, left, and Jason Robinson, right, played big roles in the Indians not only winning the battle in the trenches Friday night, but also nabbing the victory on the scoreboard as the Tribe (1-1) toppled Texas High (1-1) 26-13 Friday night at the Tomato Bowl. 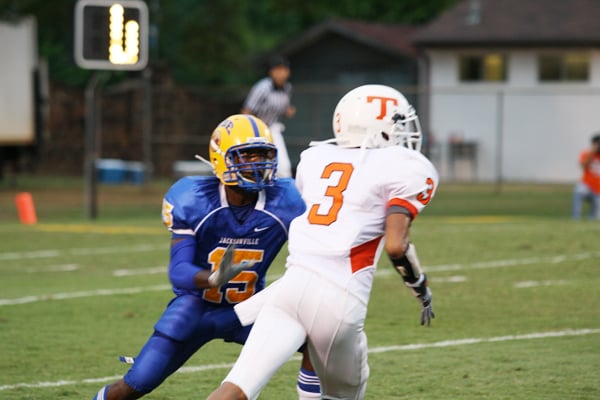 Indian defensive back Skyler Price is shown covering Texas High’s Joseph Thurmond during the first half of the Indians’ 26-13 win over the Tigers on Friday night. Jacksonville will take to the road for the first time in 2010 on Friday when they visit Gilmer for a 7:30 p.m. kickoff on Friday.

Jacksonville defensive linemen Chase Palmer, left, and Jason Robinson, right, played big roles in the Indians not only winning the battle in the trenches Friday night, but also nabbing the victory on the scoreboard as the Tribe (1-1) toppled Texas High (1-1) 26-13 Friday night at the Tomato Bowl.

Indian defensive back Skyler Price is shown covering Texas High’s Joseph Thurmond during the first half of the Indians’ 26-13 win over the Tigers on Friday night. Jacksonville will take to the road for the first time in 2010 on Friday when they visit Gilmer for a 7:30 p.m. kickoff on Friday.

Jacksonville’s Black brothers — senior Ryan Black and freshman Andrew Black — served  Texas High a one-two punch in the third quarter that the Tigers, who came into the game ranked No. 22 in this week’s state Class 4-A poll, could not overcome as Jacksonville doubled up Texas High 26-13 at the Tomato Bowl Friday night.

The Indians (1-1) took the opening kick off of the second half and went on a compact-four play scoring drive that lasted just 1:32 and ended when the Tribe’s Ryan Black spotted Dylan Hanna all alone, deep in the end zone. The scoring strike increased the Indians’ margin to 20-6 at that interval.

The 30-yard touchdown reception served to drop Texas High (1-1) to the mat at that point as the Tiger defense was riddled by the Tribe offense, both on the ground and through the air.

A 35-yard run by Jonathan Session — who led the Tribe in rushing with eight scampers for 58 yards — right through the heart of the Tiger defense set the touchdown pass up nicely.

Hanna said the most difficult thing about the scoring play was simply getting Ryan Black’s attention.

“I knew we were going to go down the middle and I knew what their free safety was going to do, so when I got open I began waving my hands, hoping Ryan Black would be able to see me and he found me,” Hanna said in describing the play.

A 40-yard interception return by Dexter Davis on Texas High’s second drive of the second half gave Jacksonville its best starting field position all evening, as the Tribe set up at the Tiger 19-yard line.

On the third play from scrimmage during that sequence, Ryan Black lobbed the ball to brother Andrew who was set up several yards behind the line of scrimmage on the left flank.

The precocious Andrew Black then fired a perfect strike to Session who was unguarded in the end zone.

The 20-yard touchdown hookup was the kill shot as the Tigers found themselves trailing 26-6 with 2:46 left in the third stanza.

Andrew Black said that he believes that it is important for him to earn his keep, being the only freshman on the varsity roster.

“I came out being the youngest one (player) on the field and I felt like I had to do my part to help the team win,” he said.

Andrew Black said everything worked beautifully on the play even though that particular play is not one the Indians spend a lot of time on in practice.

“It is one of those plays that we work on ever so often in practice (but) tonight it worked to perfection and we were able to score a touchdown off of it,” he explained after the game.

The victory was, no doubt, like a dream come true for Tribe fans since Jacksonville had previously not defeated Texas High since 1963.

Friday’s game was also a fantasy-turned-reality for Andrew Black.

“To be able to play on the same team as my brother who is four years older than me...you just don’t see that happening much...is like a dream come true for me,” Andrew Black said.

Jacksonville scored their first points of the game with 10:09 to play in the opening half when Tevin Garland slipped in on the first of  two 1-yard scoring runs that he would chalk up on the night. Garland led his team in rushing with 65 yards on 13 carries.

About six minutes later he again dove in from a yard away which gave the Tribe a 12-3 lead.

The Tigers’ Michael Stanley hit a 23-yard field goal with 29 ticks remaining that sent the teams to the locker room with the Indians in front 12-6.

Jacksonville head coach Steve Wells  remarked that the win was a result of a total-team effort and that his team was able to make a substantial amount of improvement following the disappointing loss to Carthage last week.

“Offensively we didn’t make the mental mistakes that we did last week and our execution was so much better,” he said. “Defensively we really stepped up on the defensive line and did a great job of getting pressure on their (Texas High’s) quarterback all night.

“I’m proud of our effort and with the way the kids fought back after last week’s loss.”

One of those Tribe defenders that seemed to be camped out in the Tiger backfield was defensive end Jacolby “Spoon” Scott.

Scott said keeping constant duress on Texas High’s signal callers was the chief objective in the game for the Indian defense and that the unit had spent a lot of extra time preparing themselves for this week’s contest.

“I think the key was getting all the pressure that we were able to put on their quarterbacks,” Scott said. “That seemed to force them to make some bad passes.

“We practiced really hard this (past) week, we stayed late and watched extra film of Texas High and then the coaches put together a great game plan for us and we were able to go out and do our jobs from there.”

Jacksonville goes on the road for the first time this year, traveling to Gilmer (1-1) on Friday while Texas High is scheduled to host Arkansas High on the same evening.

MiMi-Sandra of Fort Worth, born 7 September 1945 in Jacksonville to Joe Selman Gore and Jeffie Gwendolyn (Lazenby) Gore. Preceded by her parents and five siblings. Survived by her husband, daughters, four siblings, nieces and nephews.

Wilbur Thomas (W.T.) Chandler, 75, passed away on Sunday, May 30,2021 in Jacksonville. Private family graveside will be held in Griffin Cemetery in Cherokee County. Arrangements by Autry Funeral Home.