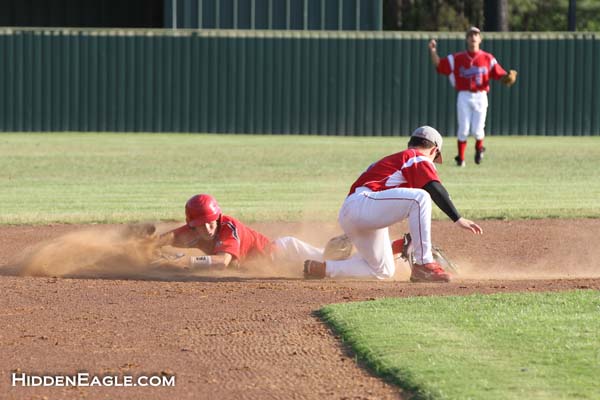 Austin Davis slides in safely at second in Rusk’s 6-5 win over Bullard Friday night at Eagle Park. The win results in the Eagles (17-11, 9-3) winning their first outright district championship since 1981. 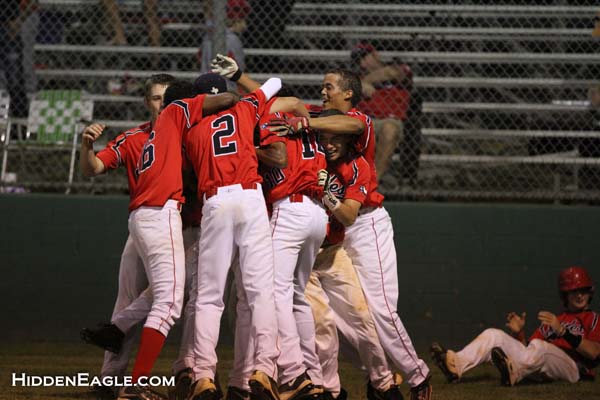 The Rusk Eagles celebrate winning the District 17-3A title by defeating Bullard 6-5 Friday night in Rusk. Drew Walley’s walk off single with two outs in the bottom of the seventh drove Trey Thrash in from third as the winning run. Rusk will travel to No. 12-ranked canton at 6 p.m. Monday for a warm-up game.

Austin Davis slides in safely at second in Rusk’s 6-5 win over Bullard Friday night at Eagle Park. The win results in the Eagles (17-11, 9-3) winning their first outright district championship since 1981.

The Rusk Eagles celebrate winning the District 17-3A title by defeating Bullard 6-5 Friday night in Rusk. Drew Walley’s walk off single with two outs in the bottom of the seventh drove Trey Thrash in from third as the winning run. Rusk will travel to No. 12-ranked canton at 6 p.m. Monday for a warm-up game.

Balloons usually serve as an indicator of a celebration and fittingly enough there was plenty to rejoice about as the Eagles got a walk off single from Drew Walley with two outs in the bottom of the seventh to edge Bullard 6-5, giving head coach James Dillard’ Eagles their first outright district championship in 30 years.

Walley’s hit, which went right over a leaping Panther shortstop and into shallow left field, came with the bases loaded and two outs on a full count pitch and plated a hard-charging Trey Thrash from third as the winning run.

Nevertheless, Bullard will represent the league as the third place team in the state playoffs later this week. The Panthers will face Jasper in bi-district play, at a site(s) to be announced.

Meanwhile, Rusk will visit Canton, ranked No. 12 in the state, at 6 p.m. Monday for a warm-up contest before opening the state playoffs late next week against either Fairfield or China Springs.

The Eagles, who led the entire game, had to come from behind to keep their unblemished home field record intact as Bullard rallied to score four times in the top of the sixth to take a 5-4 lead.

Rusk tied things up at five in the bottom half of the segment when Michael Pyle scored from second when the Bullard pitcher dropped a high pop up, off the bat of Austin Davis, in front of the mound with two outs — one of six Bullard mistakes in the game, with each leading to a Rusk run scored.

The error enabled Pyle, who was running on contact, to motor home easily.

Pyle had led off the inning with a crisp single into right field and advanced to second on a wild pitch.

Bullard went down quietly in the top of the seventh, as Matt Gillioun, pitching his second inning of relief, fanned the first two Panthers that he faced before getting the final hitter on a groundout.

Gillioun, one of six seniors honored in pre-game Senior Night festivities, whiffed four of the five Panthers he faced to earn the pitching victory.

Thrash led off the bottom of the seventh with a single up-the-middle off of the Panthers’ third pitcher of the evening, Cameron Haliford.

Gillioun then layed down a perfect bunt that was fielded cleanly by Haliford.

Haliford then threw the ball to second to try to get Thrash, the potential winning run, but Haliford’s throw was off the mark which meant Thrash was safe at second as was Gillioun at first.

After Haliford retired the next Rusk batter, he hit Josh Skinner with a pitch to load the sacks with one out.

Haliford then fanned Pyle which put all the pressure on Rusk’s sophomore firstbaseman, Walley.

Walley said that he knew what his team needed him to do in the situation.

“I knew that we needed me to get on base,” he said after the game. “I’ve been struggling (at the plate) lately, so I just wanted to go up there and do my best.”

When the count ran full, Walley said that that gave him the advantage because he knew what pitch Haliford would have to come with.

“I was looking for the fast ball all the way,” he said. “I Q-tipped it a little bit, but it had enough on it to fall in.”

“I think that I will always remember this game.”

Rusk scored one run in the first inning, two in the third and one in the fourth to spread its scoring out.

Davis ,Thrash, Walley and Pyle led the Eagles at the plate by stroking out a pair of hits each.

Davis, batting lead off, went 2-for-3, 1 RBI, 2 runs scored and 2 stolen bases which gave him the new Rusk single season record for swipes.

Thrash finished up 2-for-4 including a solo home run over the 325-foot sign in left field in the third inning.

Skinner, who started on the mound and worked five innings, giving up five hits and Bullard’s first-three runs, in a 100-pitch outing, had a double in the game.

Taylor McIntyre, Kirk Bryant and Cody Goode had a pair of hits apiece for the Panthers.

Bryant and McIntyre each doubled in the sixth account for the  Panthers’ only extra base hits of the evening.

As expected, Dillard, was ecstatic about his team’s accomplishments, both in the game and for the season.

“It was a great ballgame (Friday),” he said shortly after getting the water cooler bath from some of his players. “TIp your hat to Bullard for playing a great game.

NOTES:  Seniors Austin Davis, Dillon Fitts, Trey Thrash, Matt Gillioun, Josh Skinner and Michael Lloyd were honored on the field, along with their family members, prior to the first pitch...Rusk finished in a three-way tie for first in 1982 according to Dillard...Assisting Dillard with the coaching duties are Jason Barnes and Tracey Kincade...Taft Rose and Trevor Rumbelow also hit safely for Bullard.