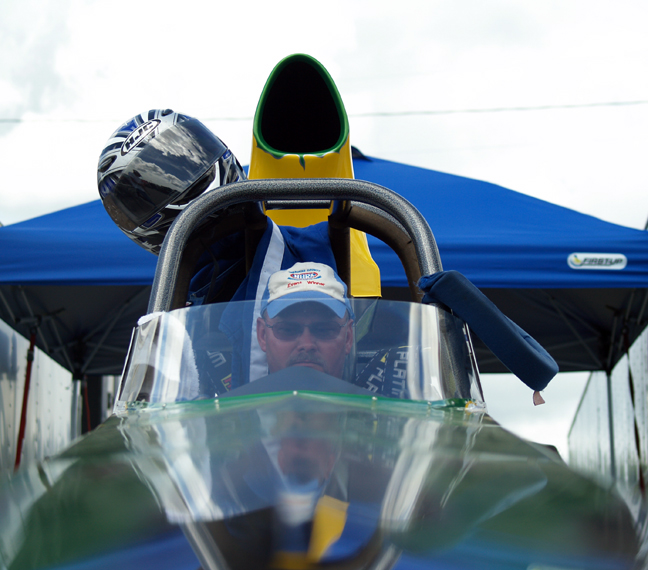 John Maddox, of Jacksonville, listens to his engine run before his qualifying race at the East Texas State Championship at Cherokee County Motorsports Park in Rusk. Maddox is ninth in the NHRA South Central Division 4 Top Dragster standings. 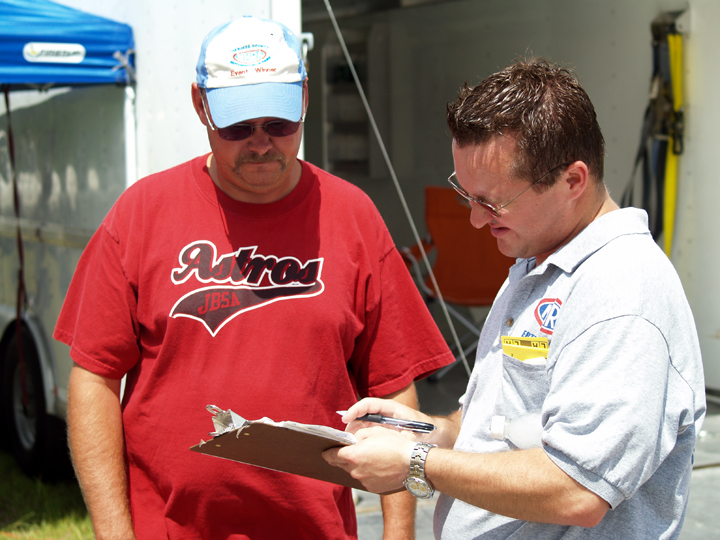 John Maddox, of Jacksonville, listens to his engine run before his qualifying race at the East Texas State Championship at Cherokee County Motorsports Park in Rusk. Maddox is ninth in the NHRA South Central Division 4 Top Dragster standings.

RUSK — Moving from the peaceful sport of fishing to the loud and fast sport of drag racing might seem like going from one extreme to another, but it didn’t take long for John Maddox, of Jacksonville, to get adjusted. “One time and you’re hooked,” Maddox said during the NHRA South Central Division 4 competition at Cherokee County Motorsports Park in Rusk this weekend. Maddox’s favorite pastime, originally, was fishing, but his wife, Jamie, urged her husband to take up her family’s pastime — drag racing. “I used to go fishing all the time and my wife was mad because I was gone all the time,” John said. “Her dad raced and she said ‘Well why don’t you get a race car?’ I sold my boat and I bought a race car, and I’ve been doing this ever since.” Ten years later, John is a track champion, was named the Elapsed Time Driver of the Year in 2004, is currently in ninth place in the NHRA Top Dragster standings and is in second place in the Super Pro division at CCMP. With John getting involved in racing, Jamie’s family pastime has trickled down to their children, Blake, 10 and Morgan, 3. “He likes it, I like it, our children like it and so it’s our family pastime,” Jamie said. Blake is in first place in the junior dragster division at CCMP and Morgan has picked out the color of her car. “Blake loves racing and Morgan likes to watch the cars and she says that she wants a ‘pink race car,’” said Jamie, Health Service Coordinator for the Jacksonville Independent School District. “I feel like it’s a family sport and the kids like it.” Racing has become a year-round endeavor for the Maddox family, with up-keep of the 235-inch dragster — or the “Green Lizard,” as Blake and Morgan call it — during the winter months and racing almost every Saturday from March to October, John said. Jamie said race weekends give the family time to spend with each other and other competitors. “We usually plan meals in between races and we hang out and work on the cars together,” Jamie said. “We visit with the other racers and we all just spend time together as a group. Some people hang out at the country club, and we hang out with other racers.” John’s personal best in his 950-horsepower dragster is 7.42 seconds at 181 mph in Memphis earlier this year. To the average driver, covering the distance of a quarter-mile in seven seconds might be hard to imagine, but John said, with experience, a driver’s mind adjusts to the speed. “The longer you drive the slower it seems,” said John, an engineer for TXU. “When you first start driving it, it takes you two or three weeks to get adapted and then your mind will catch up. Sometimes it seems like slow motion and once you get used to it, you start looking around. “Really, you just point it straight and hang on.” Although John and Blake are traveling at high speeds, Jamie said she doesn’t worry about them getting hurt. “I know that John is very cautious,” Jamie said. “He doesn’t take risks and so, if something happened, it would be a pure accident. He is very thorough with all the requirements and I know that he has all his safety gear on and it’s the same thing with Blake. I really don’t think about the other part, because it could happen to anybody.” John said the adrenaline rush and the family atmosphere keep him and his family coming back. “Out here it’s just a big family,” John said. To see John Maddox’s race times and the results of the East Texas State Championship at Cherokee County Motorsports Park go to www.dragracecentral.com.

MiMi-Sandra of Fort Worth, born 7 September 1945 in Jacksonville to Joe Selman Gore and Jeffie Gwendolyn (Lazenby) Gore. Preceded by her parents and five siblings. Survived by her husband, daughters, four siblings, nieces and nephews.

Wilbur Thomas (W.T.) Chandler, 75, passed away on Sunday, May 30,2021 in Jacksonville. Private family graveside will be held in Griffin Cemetery in Cherokee County. Arrangements by Autry Funeral Home.