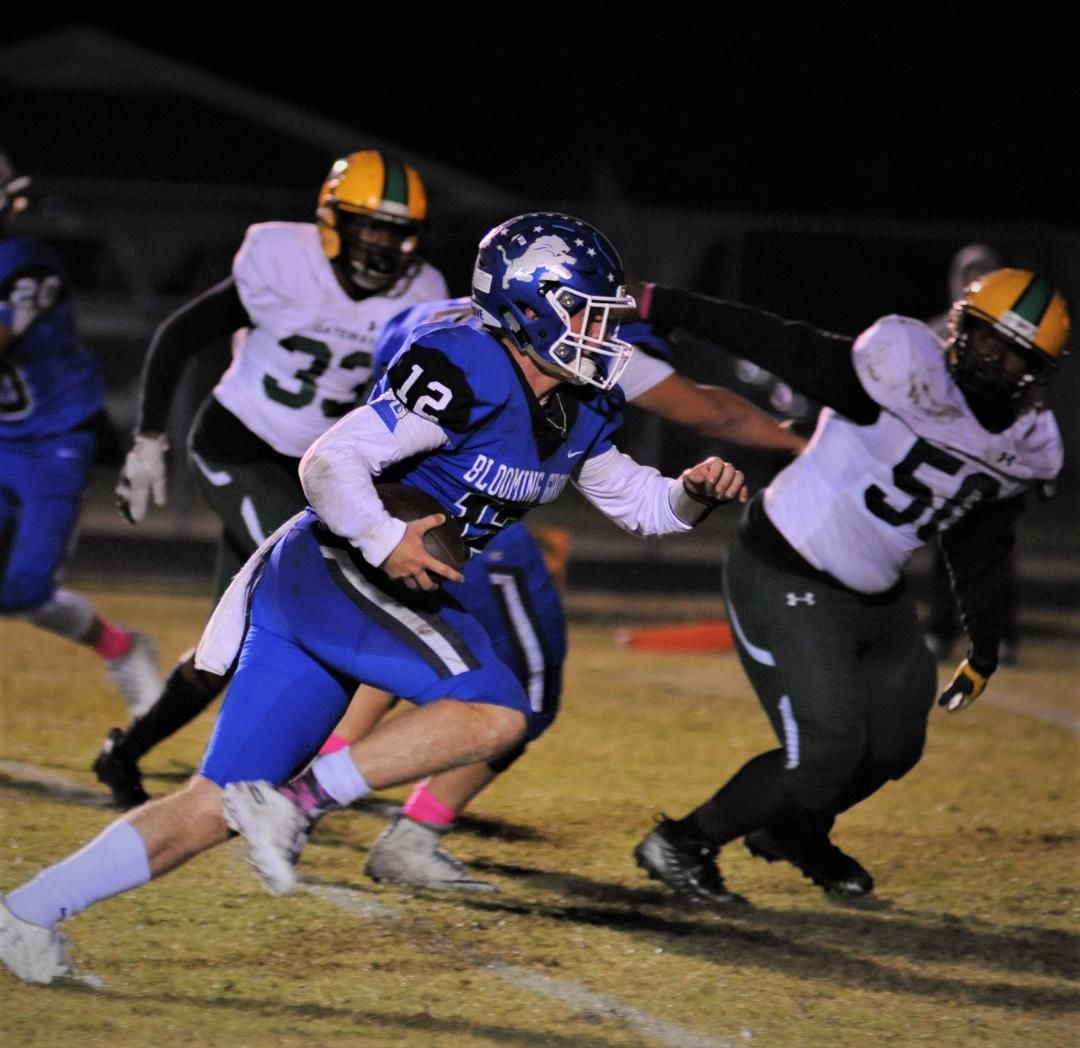 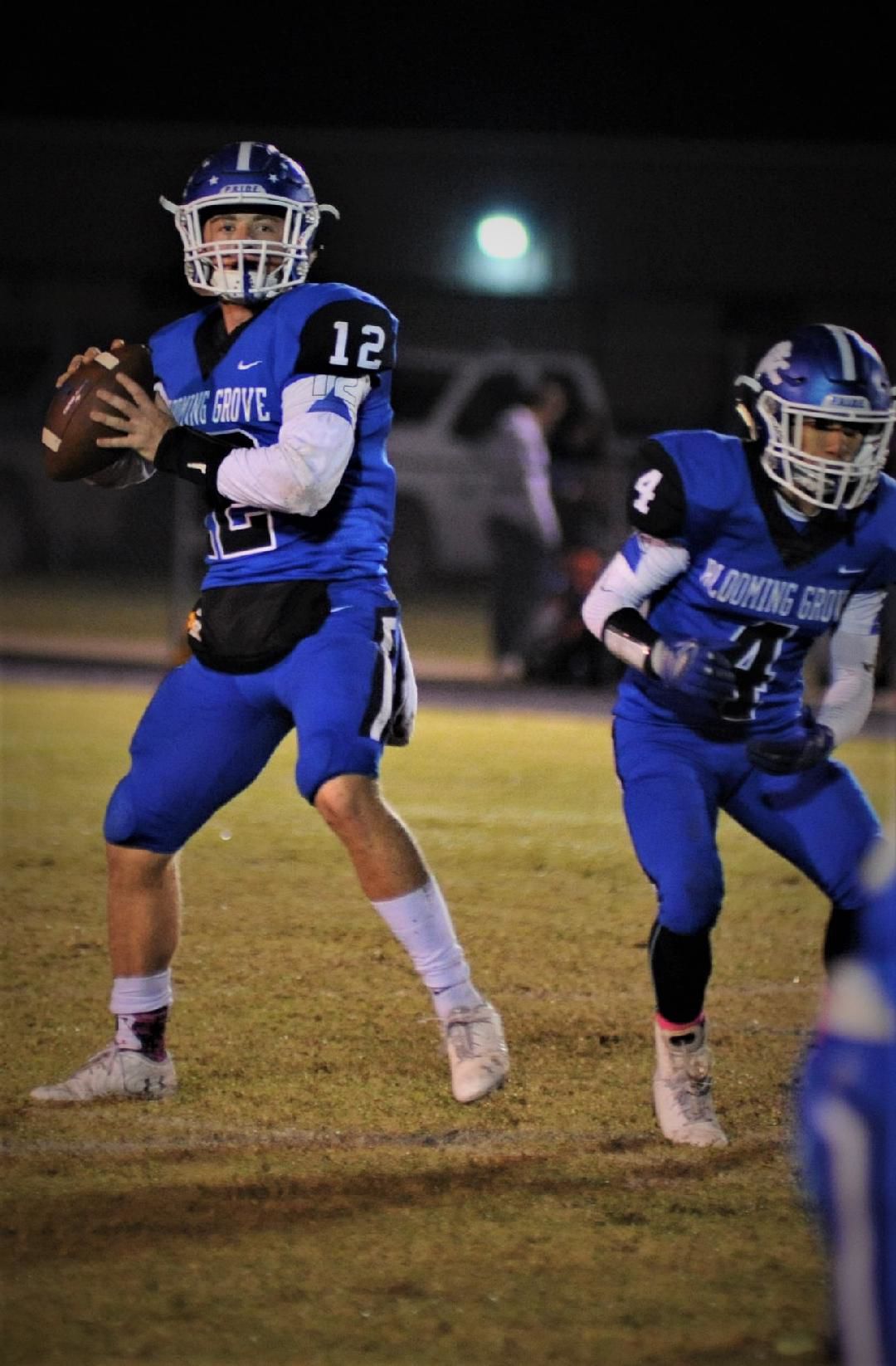 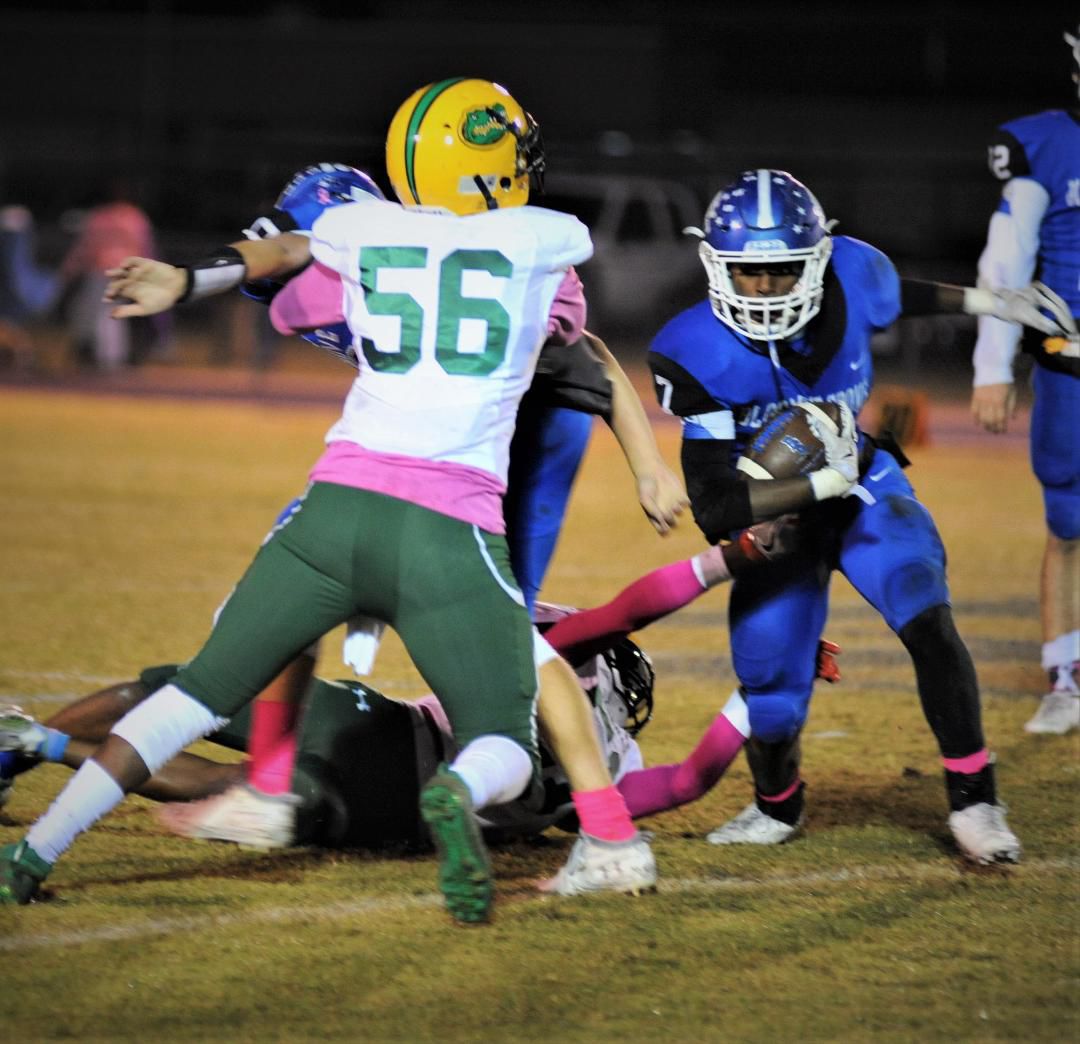 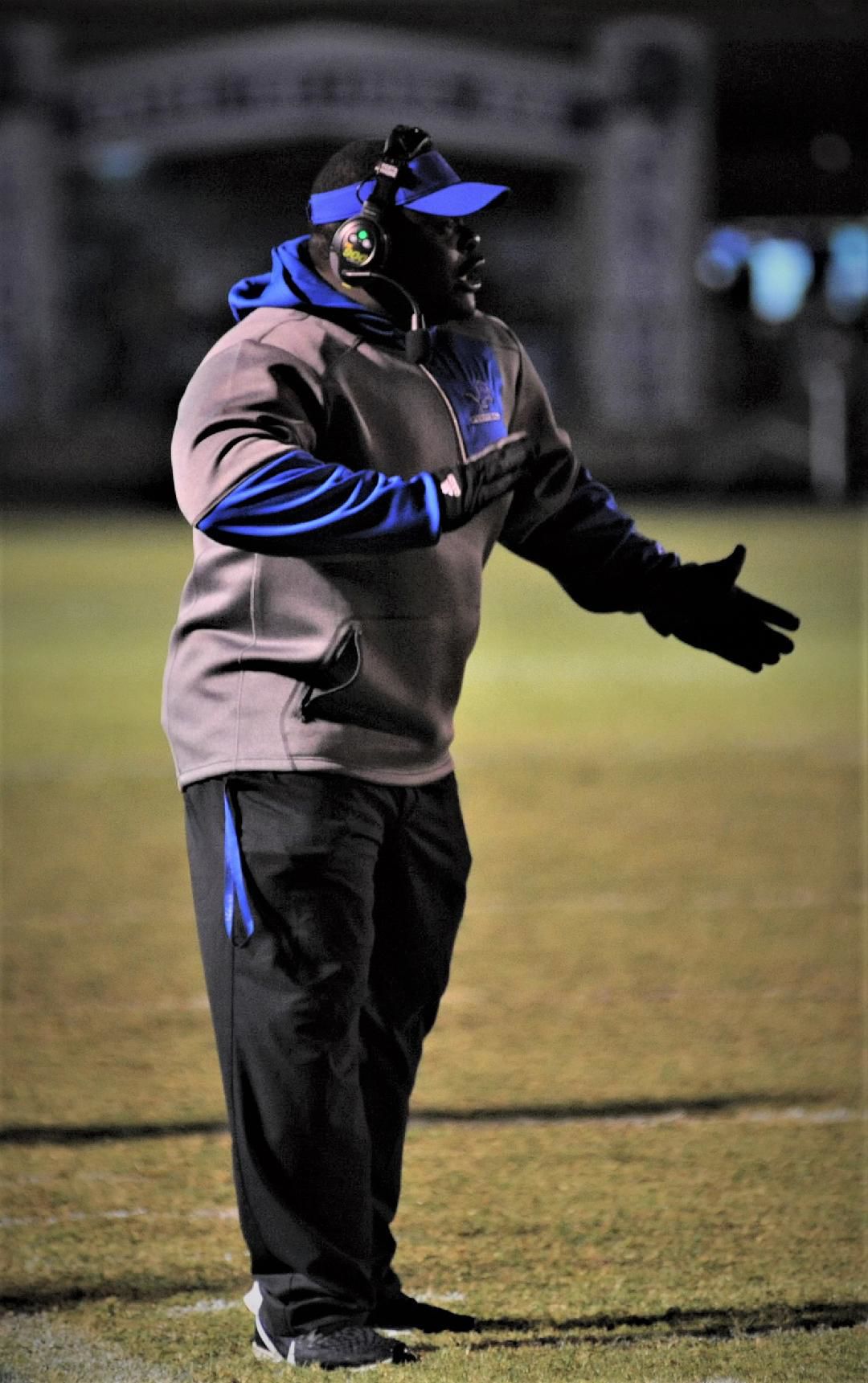 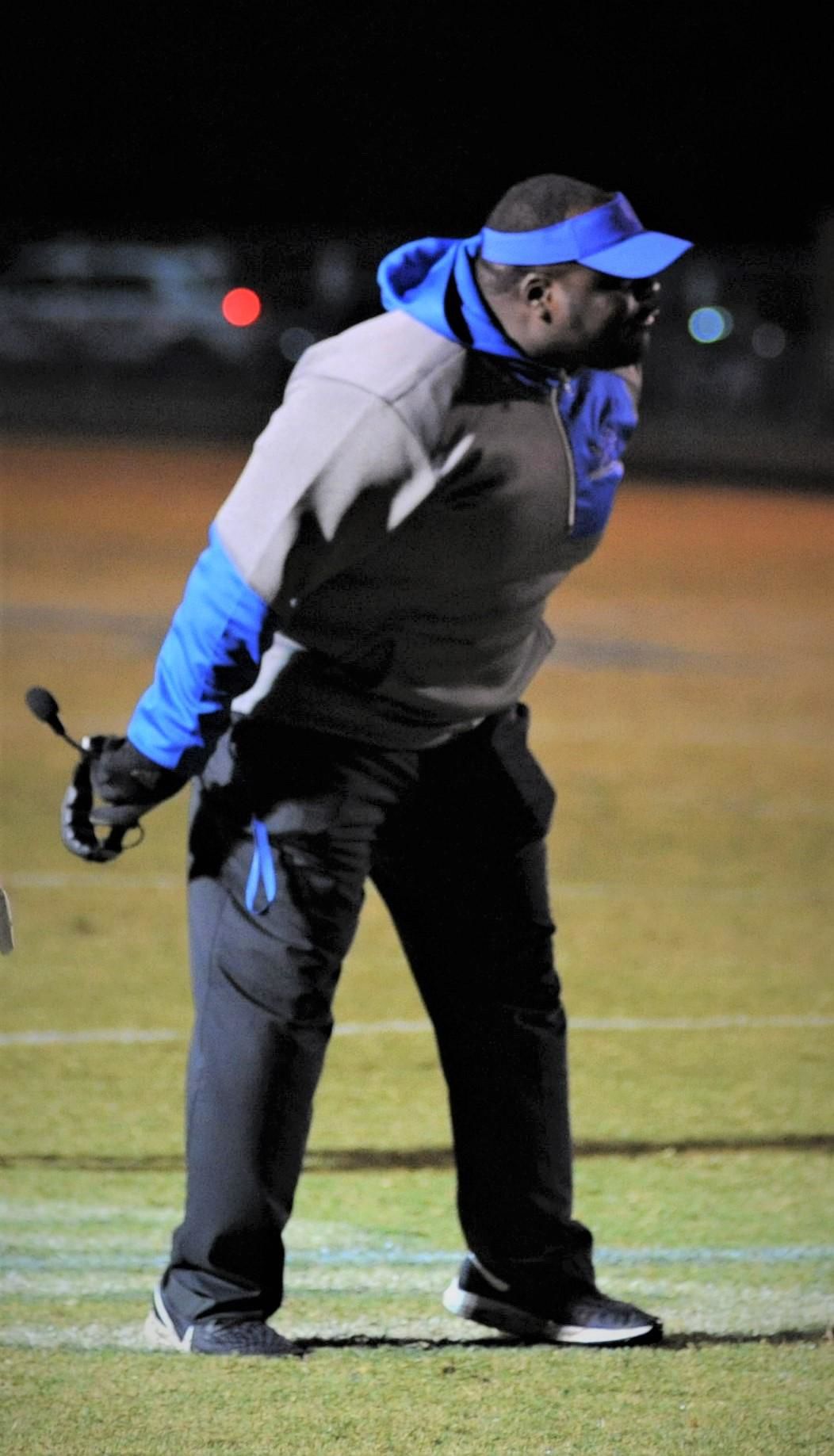 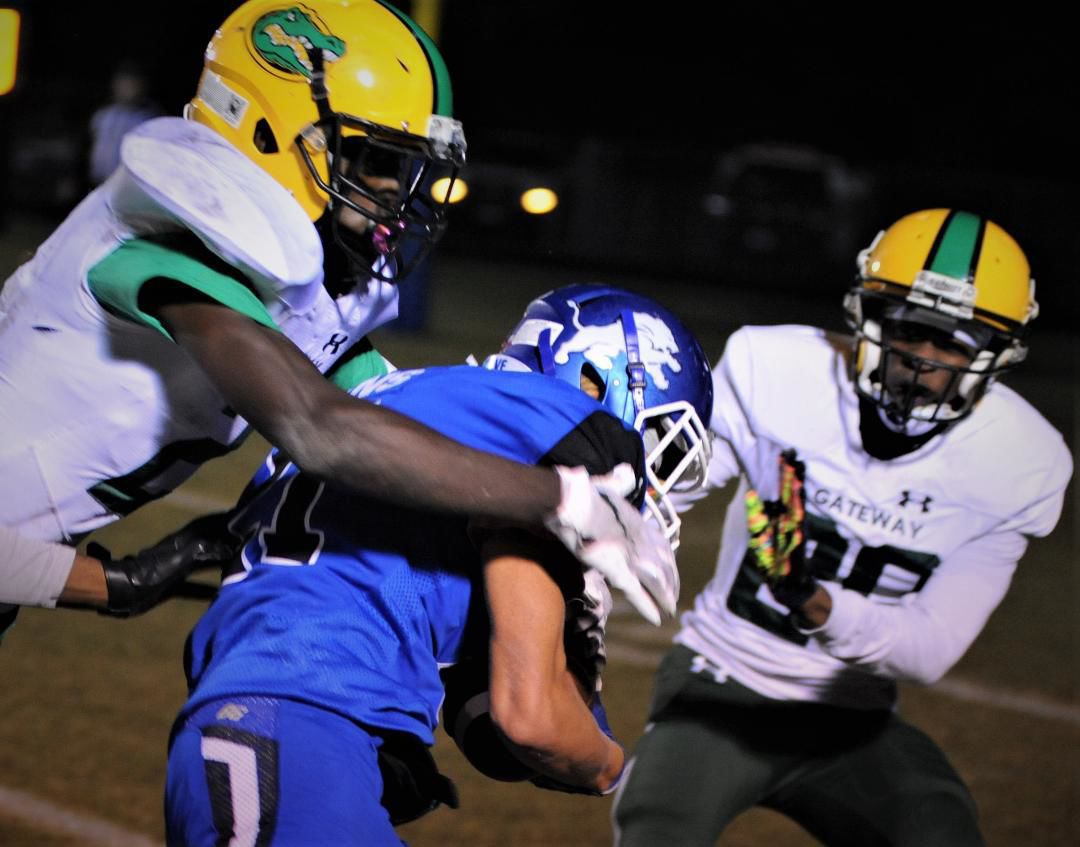 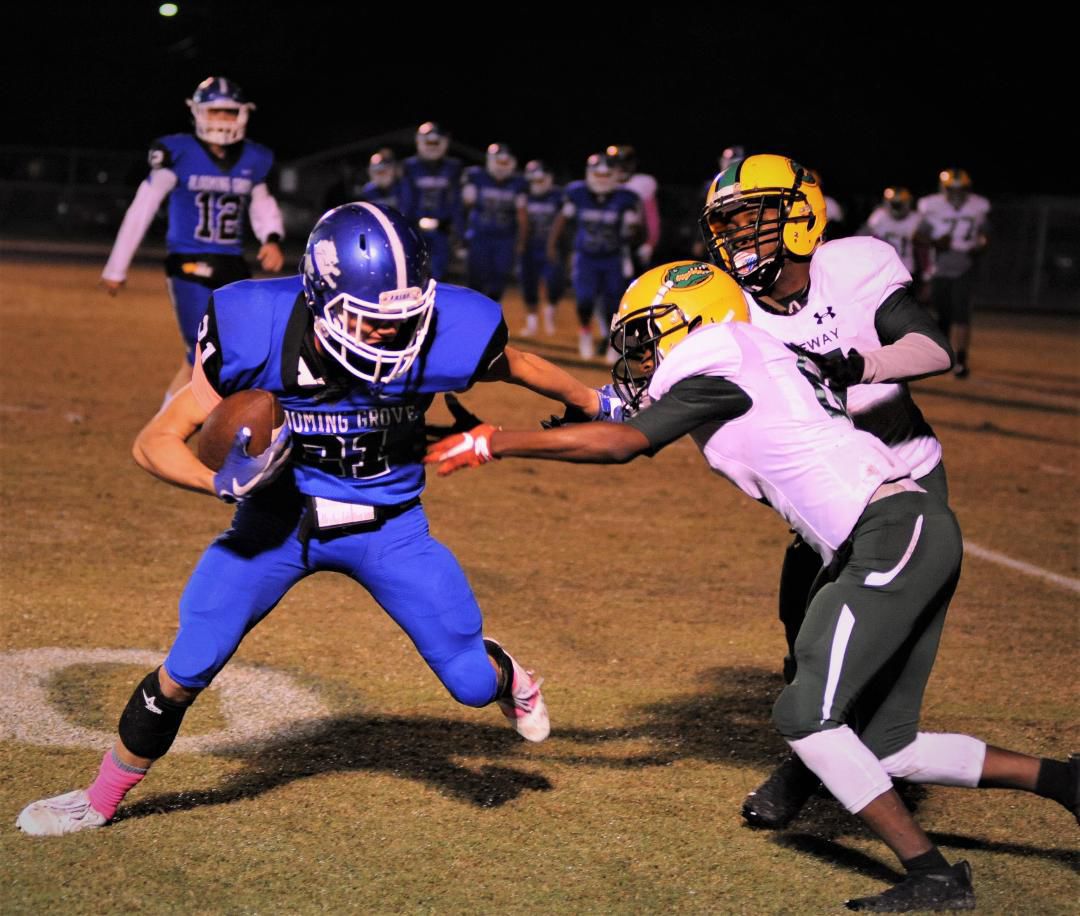 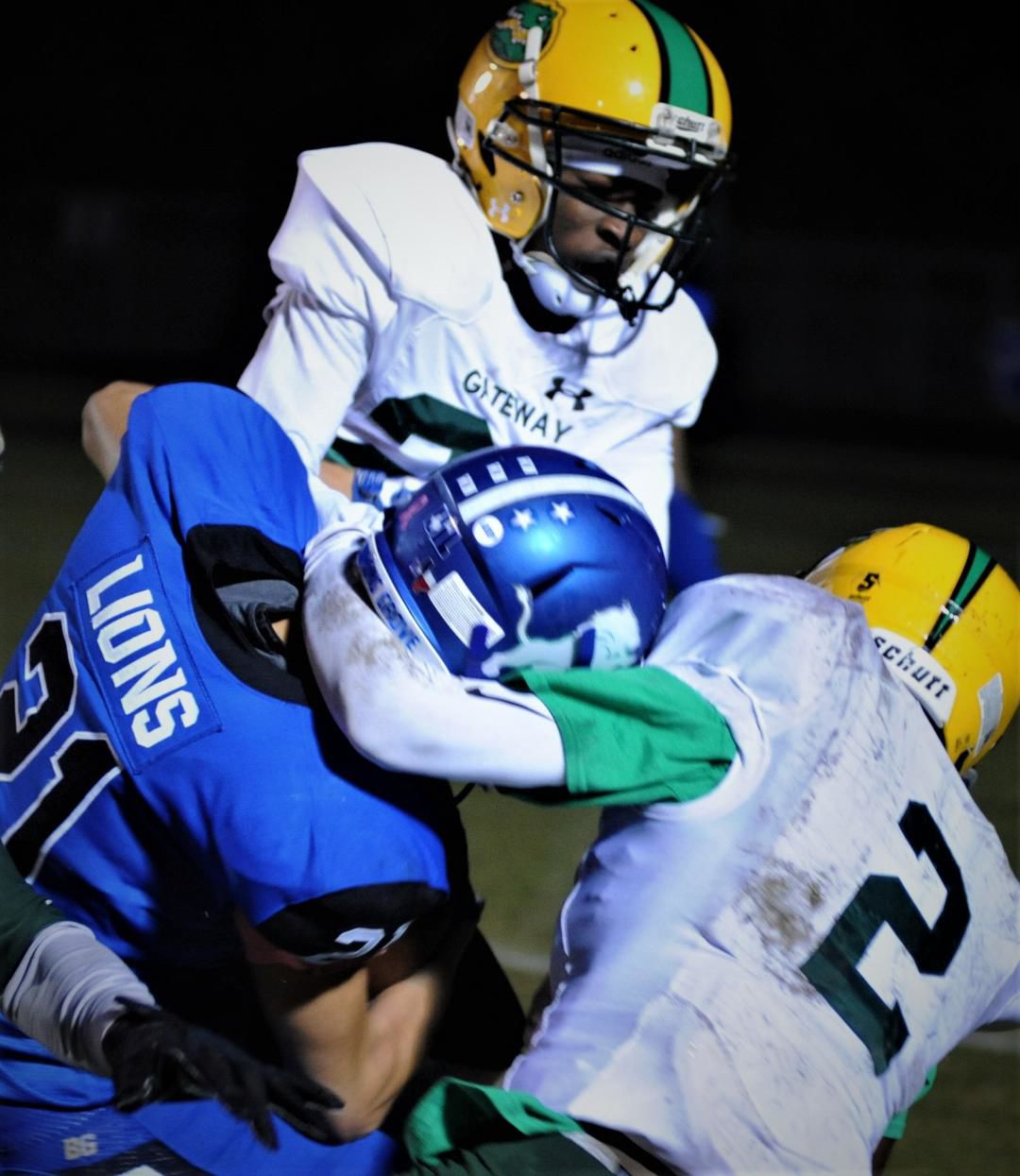 BLOOMING GROVE -- The Blooming Grove Lions used a swarming defense and an opportunistic offense Friday night to completely control the Gateway Gators 48-8 in a game played at Lions Stadium.

The victory by the Lions improved their overall record to 4-4 and upped their district mark to 2-3. Dallas Gateway drops to 0-8 overall and 0-5 in loop action.

The Lions strong defensive effort held the Gators to 29 total yards of offense and 3 first downs for the game. Blooming Grove also had two defensive scores, one on a fumble recovery in the end zone and one on a pass interception returned for a score. Newcomer Jay Thomas, recently promoted from the junior varsity squad, had the fumble recovery and linebacker Carson Rucks had the pick six.

It was a total defensive effort by the Lions, starting up front with Thomas, Colton Nicholson, Taylor Cochran, Charlie Flores, and Isaac Haden. Rucks, Jacob Esparza, and Julian Chavez were all over the field from their linebacker spots, and Michael Adkins, Josh Glasco, Damon Lovett, and Matthew Beacom covered the secondary. Dakota Coker, Toby DeVries, and Nick Wilcoxen all chipped in as well.

The Lions were led offensively by quarterback Rucks. Rucks completed 6 of 13 passes for 228 yards and two scores. He also suffered one interception, but, added another score on a three yard run. Omar Mandujano led the rushing attack with 49 yards on 4 carries. Jalen Coleman carried 12 times for 46, Joe Velasquez picked up 38 yards in 5 carries and had a touchdown, Thomas had 18 in 3 tries and had a touchdown, and Beacom had one carry for negative one.

The Lions got the scoring started on the initial possession of the game as they drove 58 yards in 8 plays to paydirt. Coleman had the first five carries of the drive and moved the Lions to the Gators 13 yard line. Rucks lost a yard back to the fourteen, but on third and five it was Thomas who got the call and he rumbled for 13 yards to the one with a first down. Thomas then carried it over from there to put the first points on the board. The extra point kick attempt failed, leaving the score at 6-0 with 8:24 remaining in the first quarter.

The Lions next touchdown only took one play. The Gators had recovered a Lion fumble at the Lions 9 yard line early in the second quarter. A great defensive stand by Blooming Grove moved Gateway back to the 15 and a fourth down pass attempt from their failed, giving possession to the Lions. On first down Rucks found Lovett wide open over the middle at the 50 yard line and hit him in full stride with a pass that resulted in 85 yards and a score at the 10:30 mark when Lovett outran the defense into the end zone. A conversion pass attempt failed, leaving the score at 12-0.

A three-and-out possession by Gateway following the Lion touchdown resulted in a punt that had the Lions starting at their own 42 yard line with their next possession. A 16 yard run by Coleman to the Gator 42 was followed by a three yard loss back to the 45. From there it was another touchdown pass by Rucks, this one to Beacom, that put more points on the board for the home team. The conversion run failed, leaving the score at 18-0 with 7:46 left in the quarter.

It was the Lions defense who provided the next score. A strong kick-off by Lion kicker Andrew Roberts had the Gators deep in their own territory at the six yard line. Gator running back John Turner carried for two on first down but was stripped of the ball on a second down run. The ball rolled into the end zone and Thomas recovered for a touchdown for Blooming Grove with 6:54 showing on the clock in the second quarter. Rucks carried in on the conversion run and the lead increased to 26-0.

The Lions scored once more before halftime. Starting at their own 35, a run by Coleman netted in a minus one yard, moving the ball back to the 34. A second down pass attempt fell incomplete to set up third and 11 from the 34. From there Rucks found Nicholson open over the middle with a pass and Nicholson carried all the way into the five yard line before being tackled at the one yard line. Rucks took care of that one yard on a run up the middle with 2:41 left before halftime. The conversion attempt failed, leaving the score at 34-0.

The Lions defense took care of the next score as well. The third quarter began with the Gators starting on their own 36. However, on third down and after minus 11 on the first two downs, Gateway found themselves looking at third and long. Gator quarterback DaTravon Lake had his third down pass intercepted by Rucks at the 35 and Rucks took it to the house for a score with 9:04 remaining in the third. Roberts kicked the extra point to make the score 41-0.

The Lions next score came with fifty seconds left in the third as Velasquez scored on a three yard run. Velasquez rushed for 28 yards in the drive that started at the Gator 41. Roberts kicked the extra point to put the Lions up 48-0.

The final score of the game belonged to the Gators as running back Keylon Johnson ripped off a nice 67 yard run for the touchdown with 10:31 left in the game. Courtney Montgomery carried in for the two-point conversion to produce the 48-8 final.

“We finally put together a solid game all the way through. We had four really good quarters, both offensively and defensively. It was a complete game effort. Carson really had a good game both on offense and defense. I am proud of the effort by the entire team,” summed up Lion head coach Ervin Chandler.