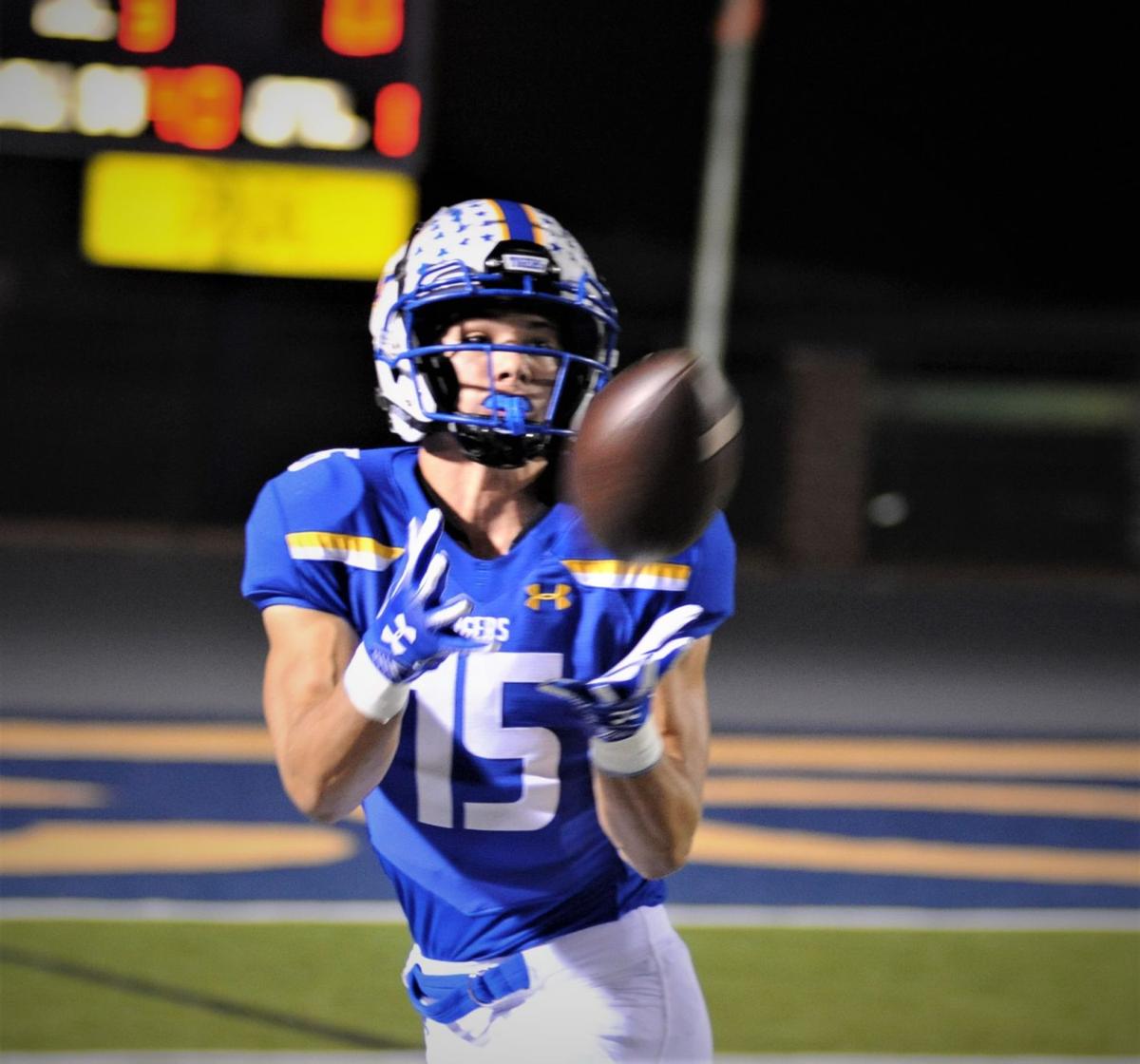 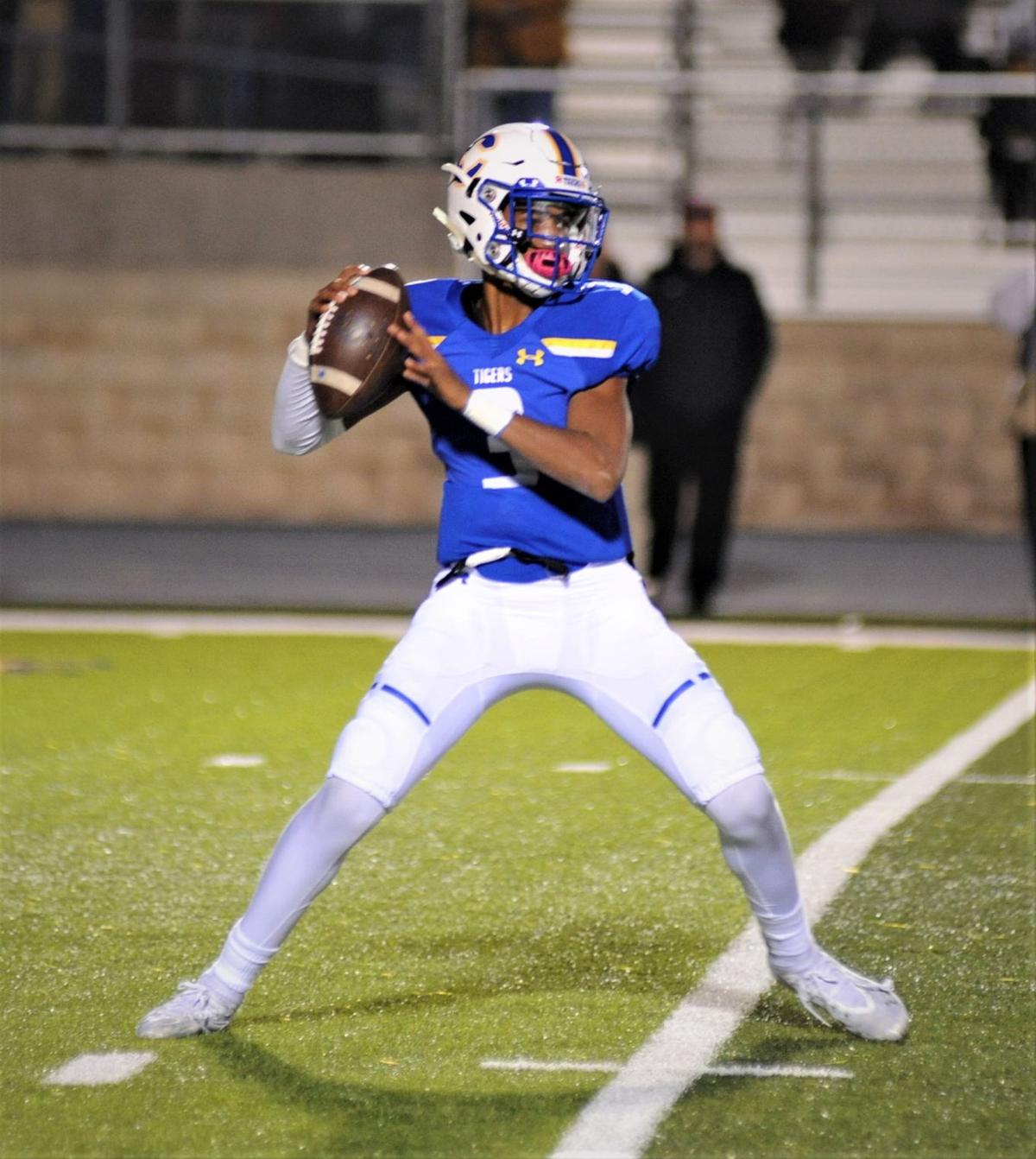 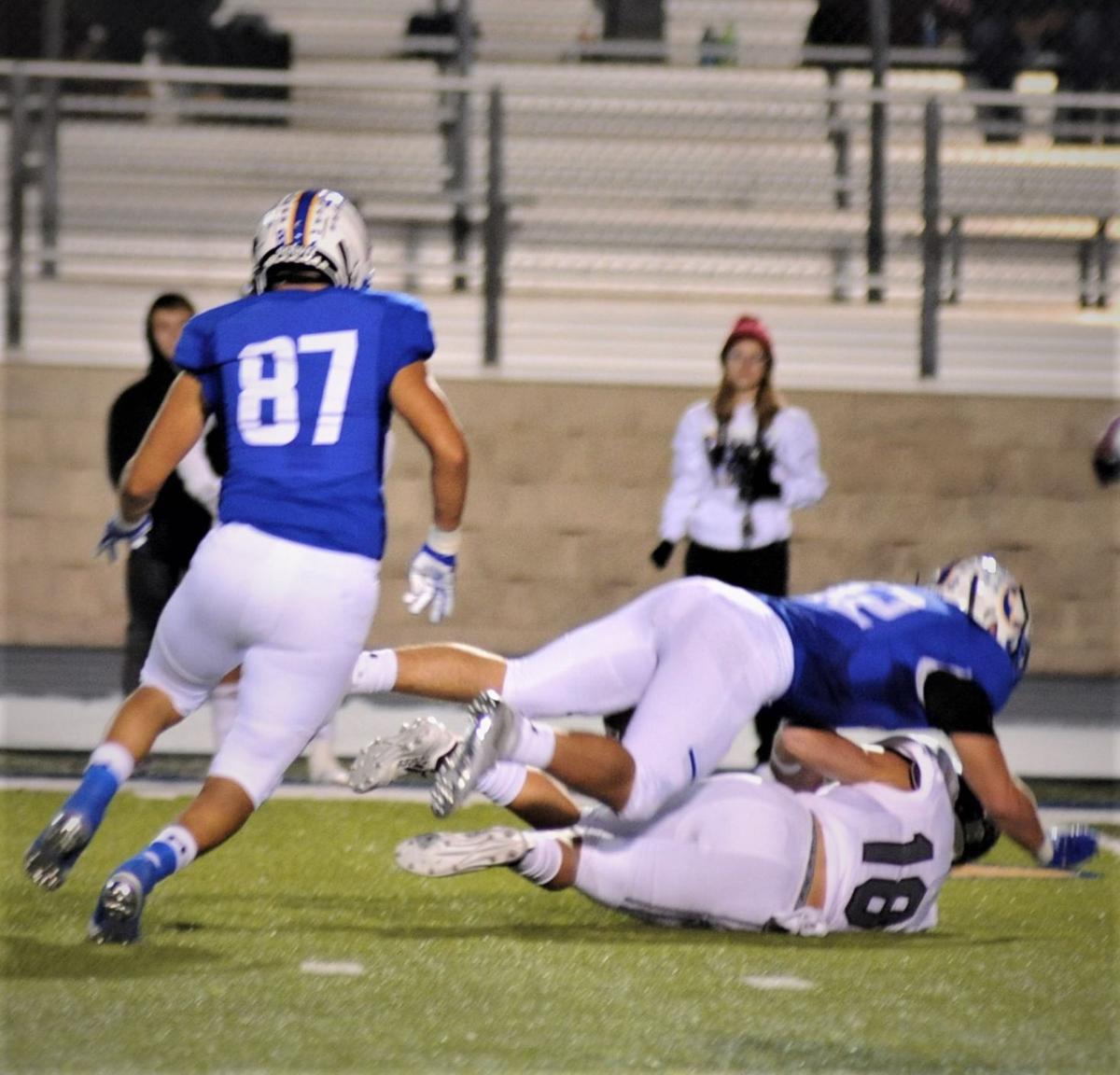 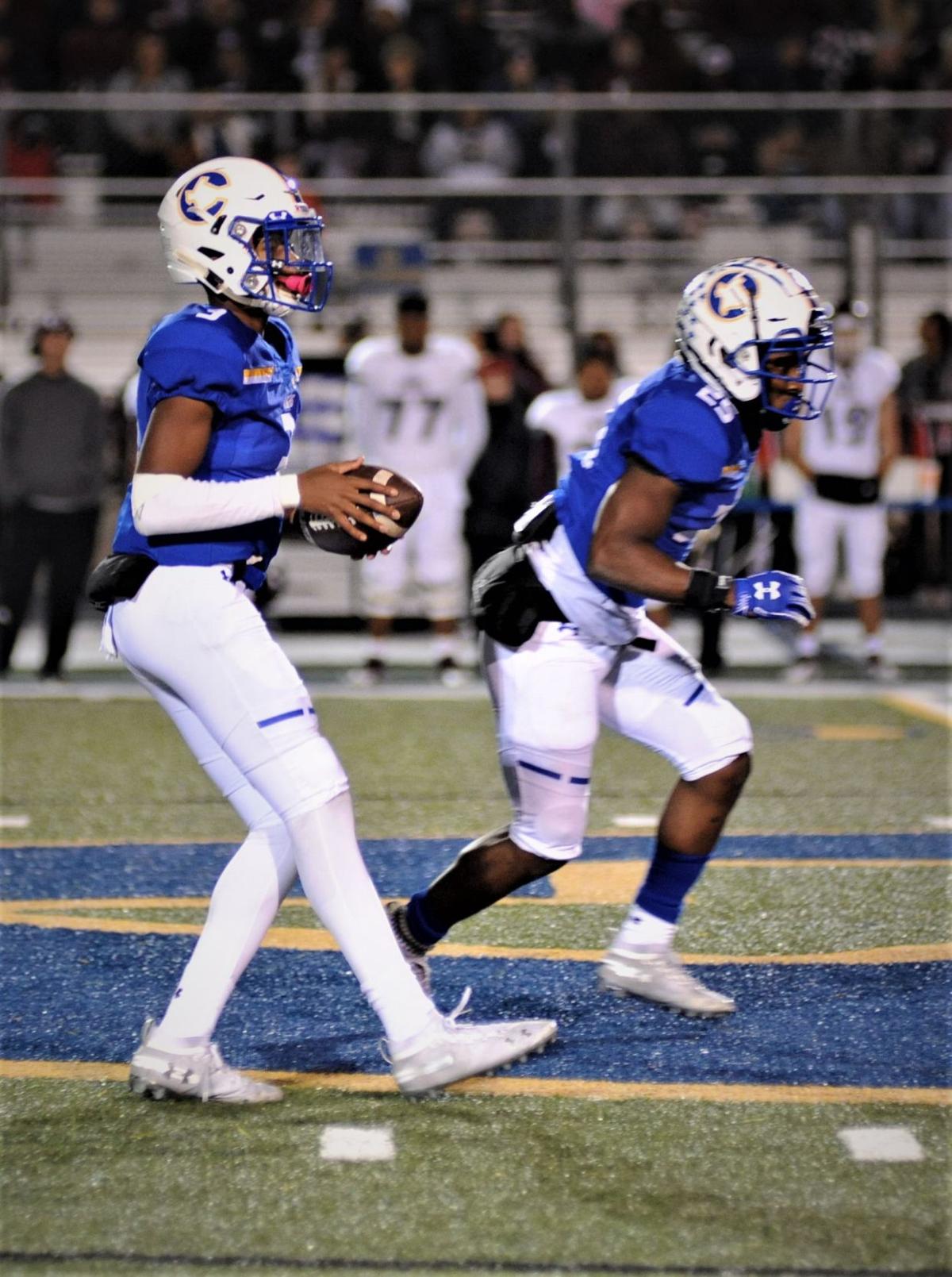 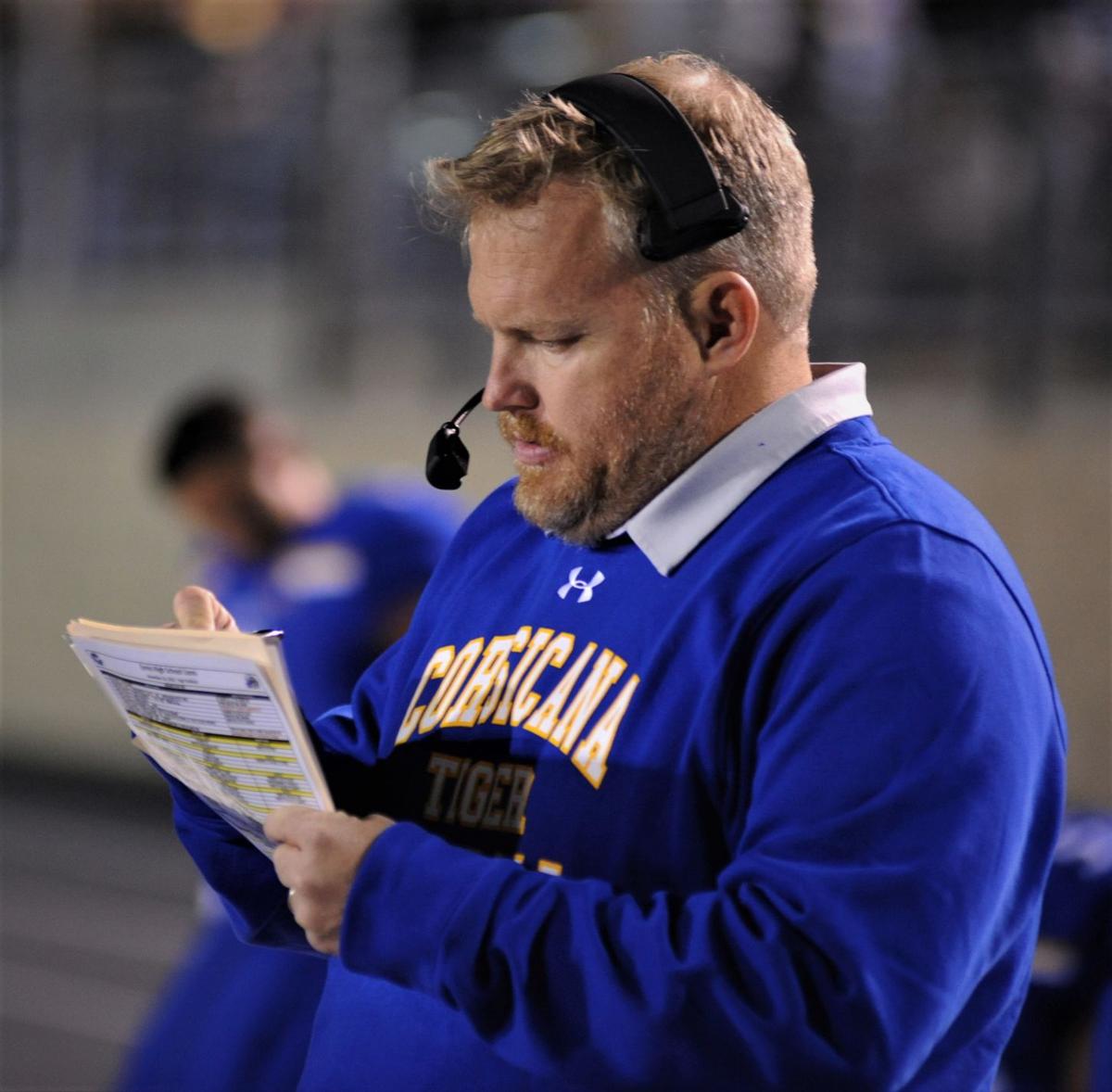 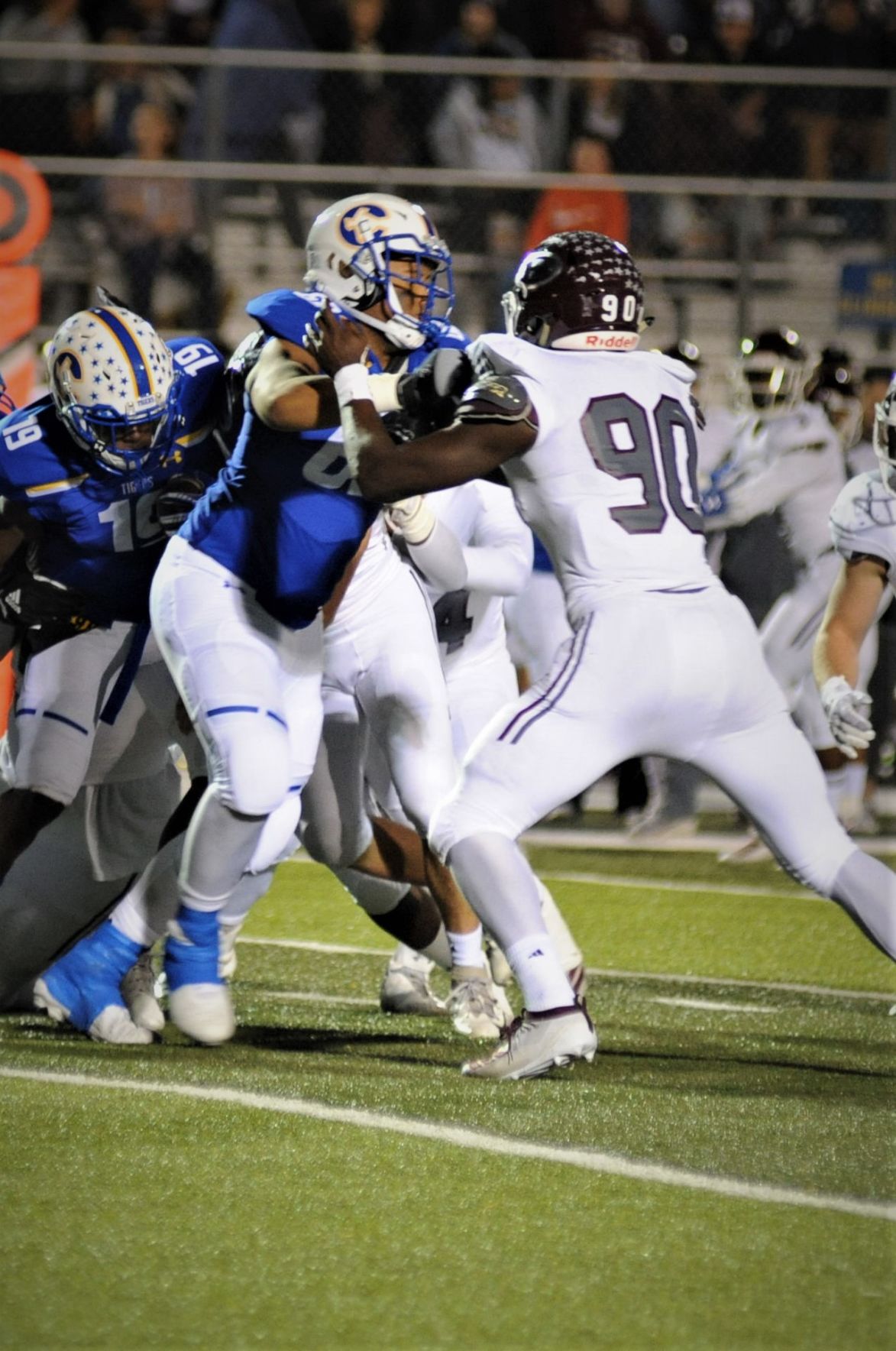 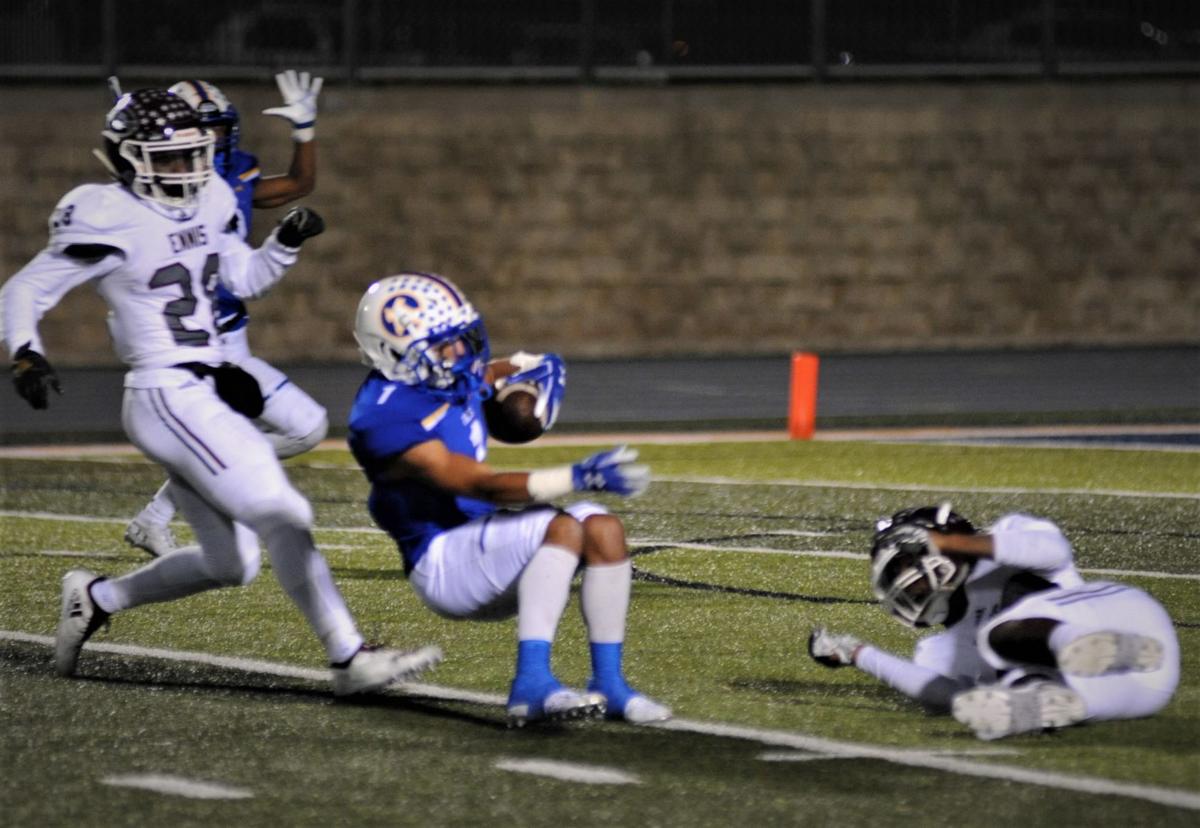 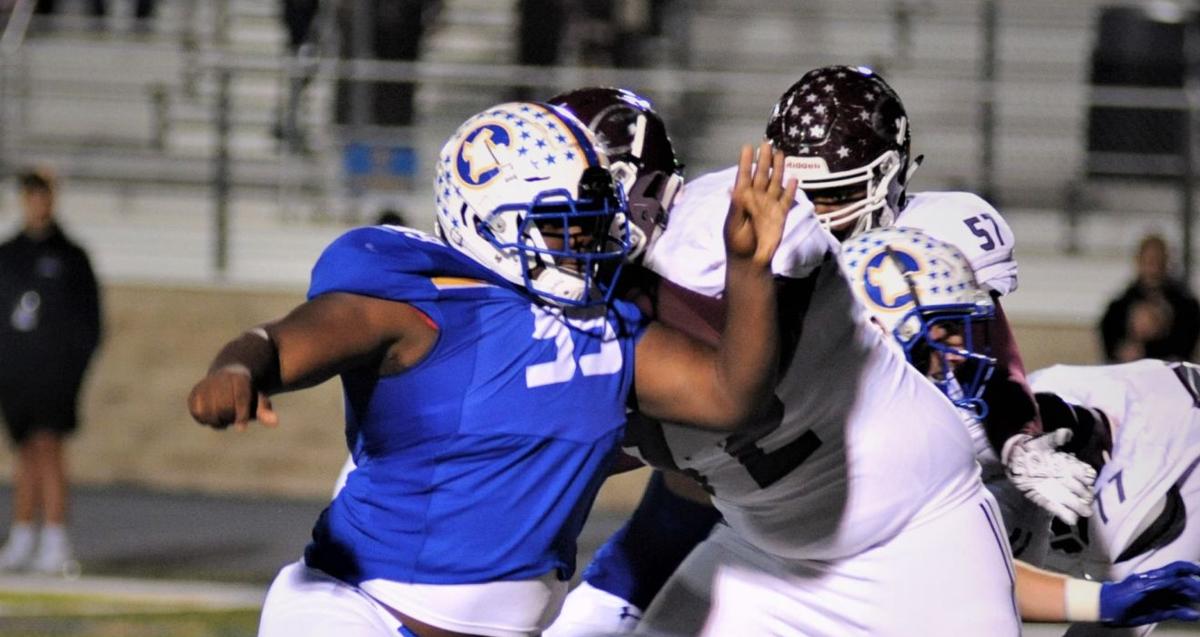 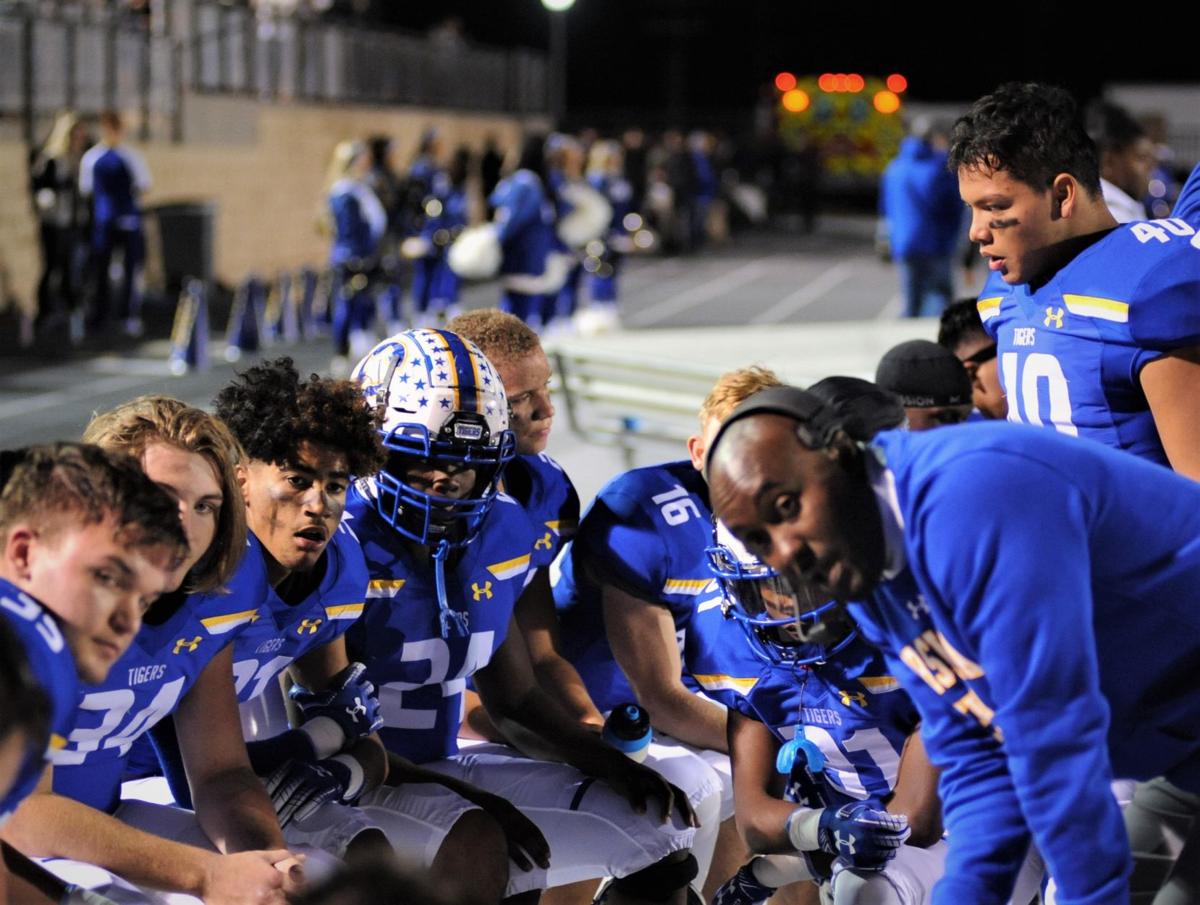 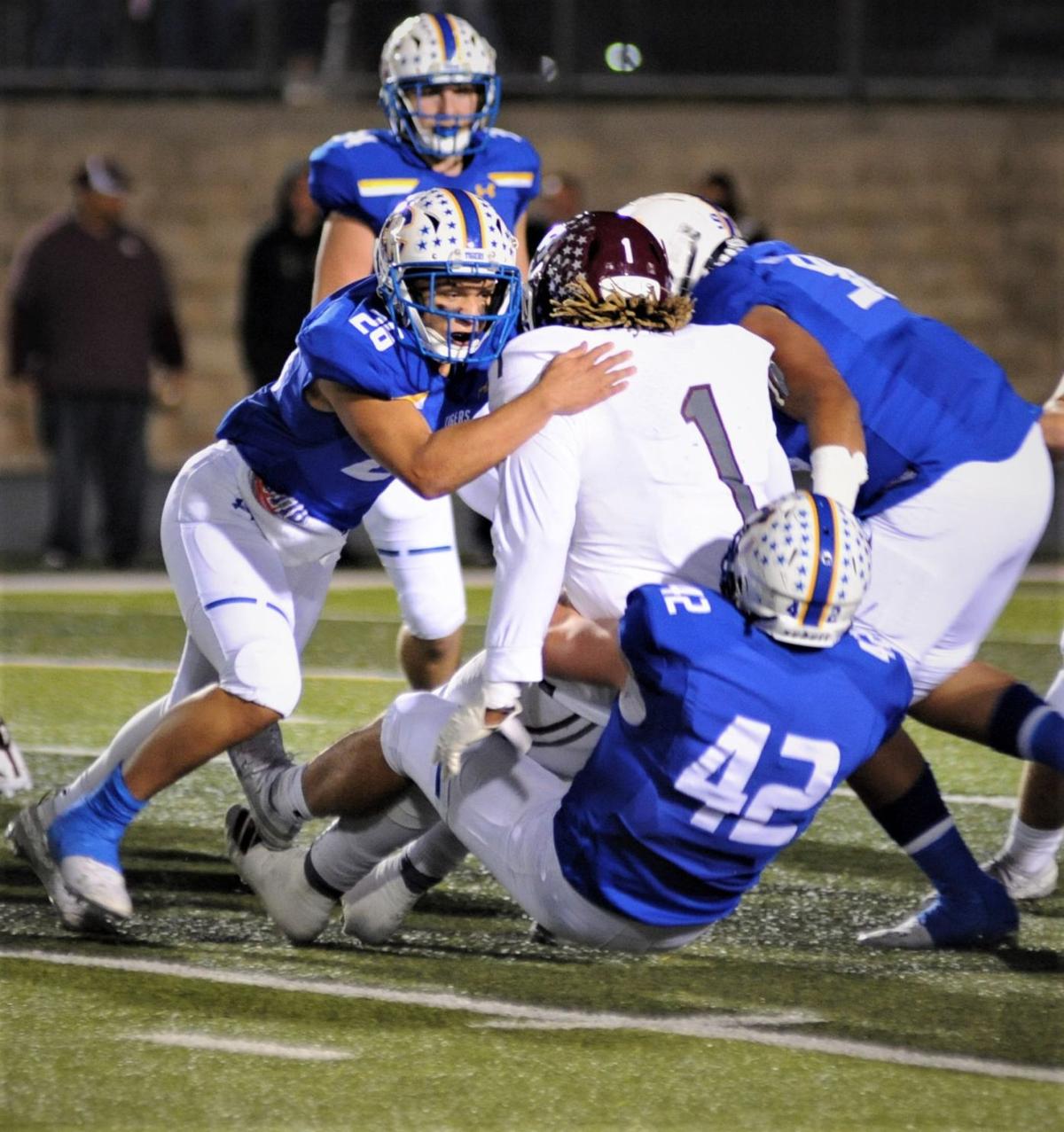 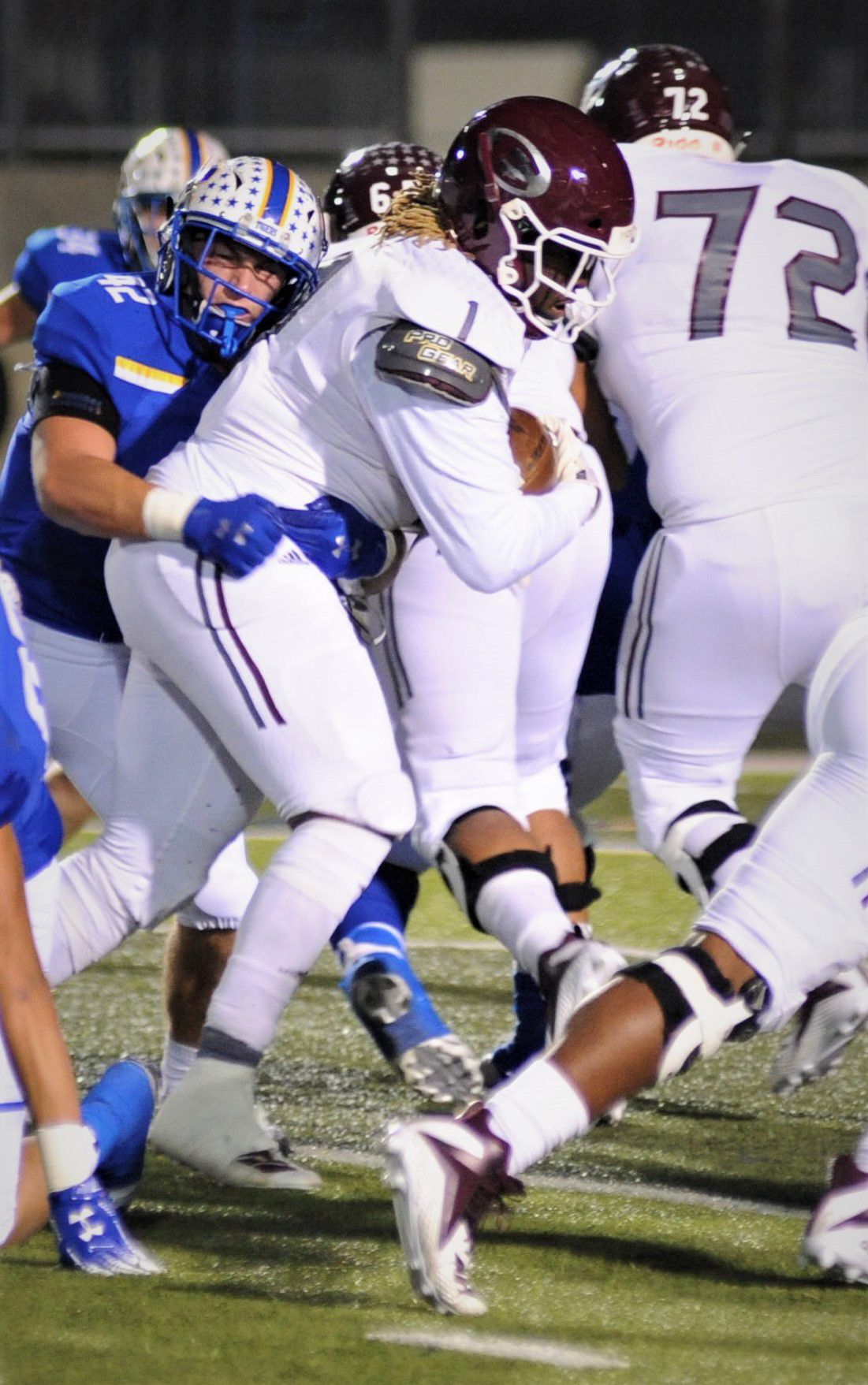 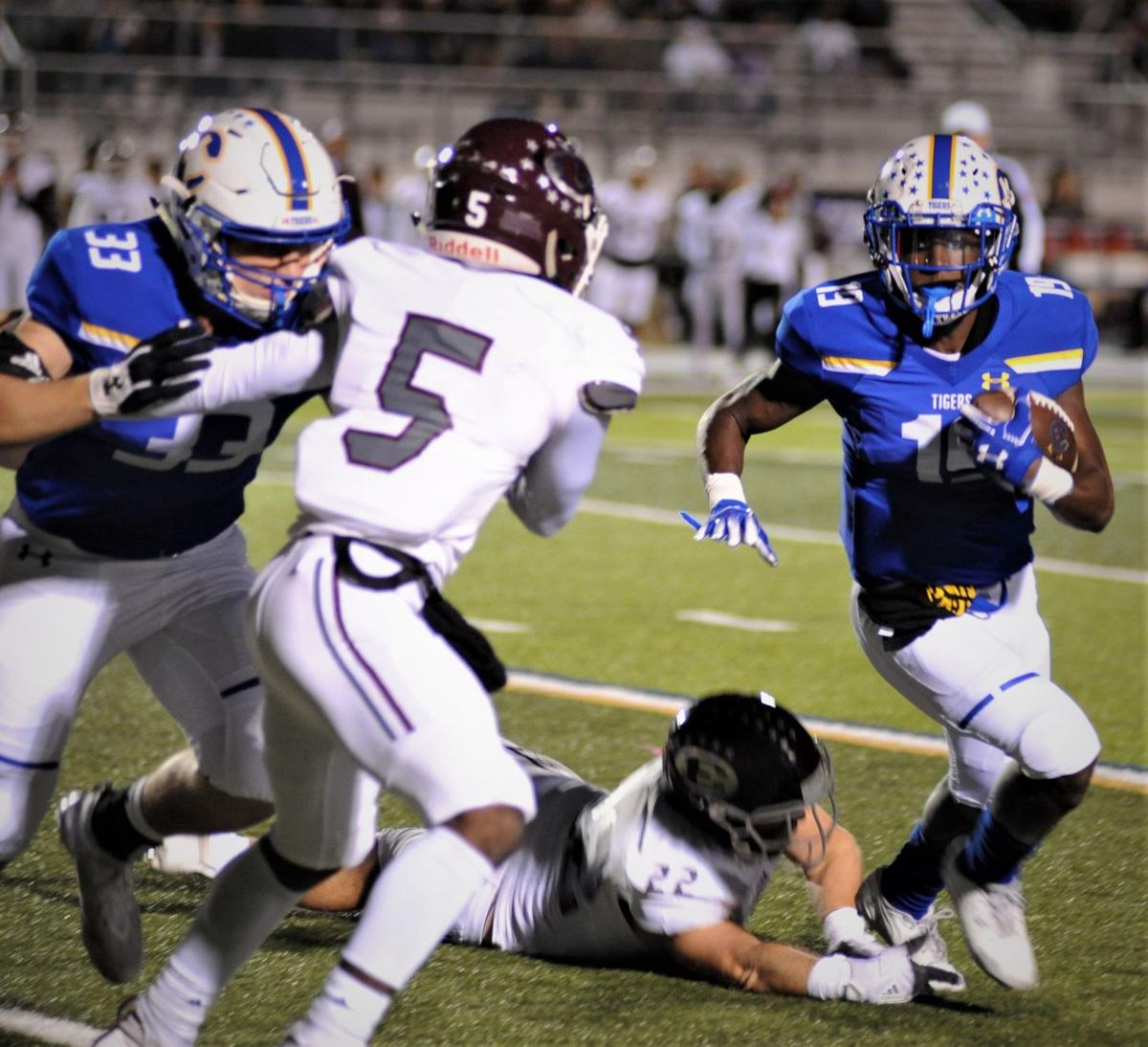 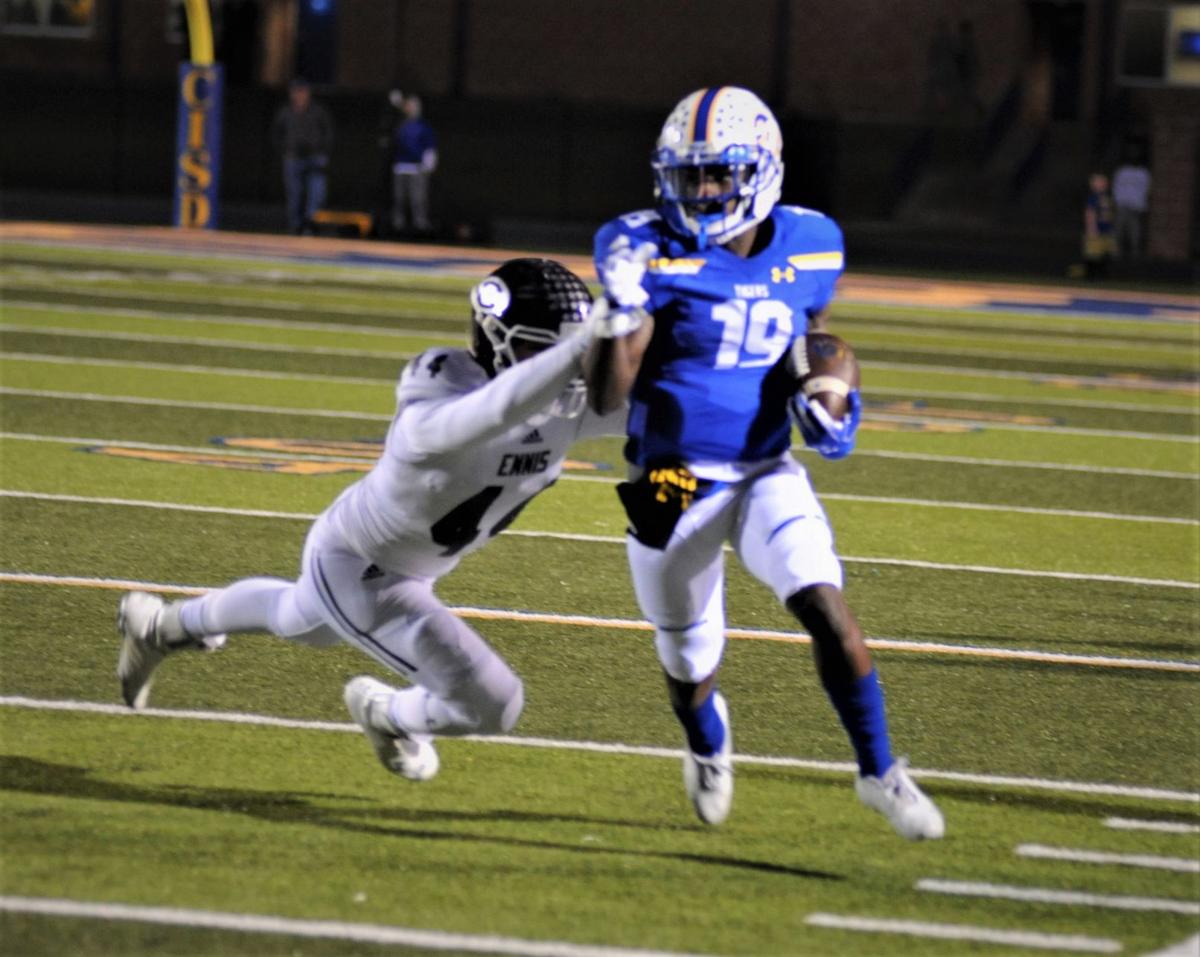 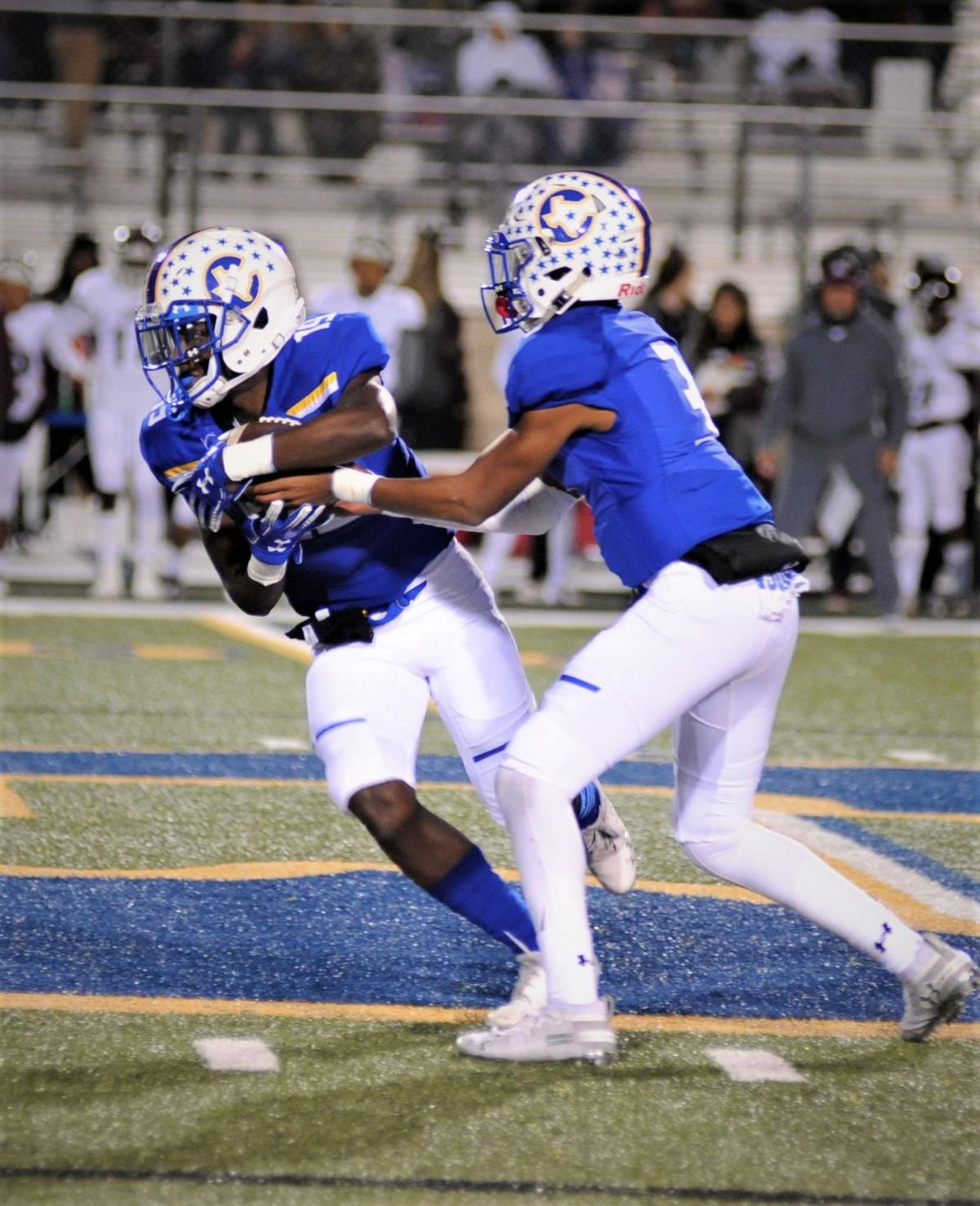 Turns out there wasn't that much difference in Ennis and Corsicana, after all.

If Ennis QB Collin Drake misses the bus, or gets stranded on I-45 on the way to Corsicana, the Tigers are the district champs today.

But Drake made the bus and he was the difference Friday night at Tiger Stadium, where the state-ranked Ennis Lions had their closest victory of the season, beating the Tigers 30-21.

More importantly for Ennis is that Drake made the trip from North McKinney to Ellis County, where his father got the job as the Ennis AD and the Lions got a quarterback who looks good enough to lead them on a playoff run.

He was good enough to lead them past Corsicana. Good enough to give Sam Harrell a win against Hal Wasson in the first meeting between the two legendary Texas coaches.

It has been a while since Dallas TV stations sent cameras to Tiger Stadium, but they were there Friday night. Their GPS's never found their way here when Jack Alvarez was playing Steve Hoffman.

It wasn't exactly David and Goliath (although Ennis' huge fullback Jarius Jones did a pretty good impersonation of the biblical giant) it was a game just about every one in Texas outside Corsicana expected Ennis to win by a wide margin.

This was Ennis showing up in Corsicana with a veteran team that is loaded with talent and a ton of players back from last year, and a brand new quarterback to put the icing on a cake that's baked for a playoff party that starts in a couple of weeks for the Lions.

And while Harrell has a strong, veteran team, Wasson is building a program in Corsicana with a team that includes 16 kids who had never played on a Friday night, and an offense so new they needed name tags last spring.

The Tigers won the district title a year ago and then graduated 92 percent of the offense (the most of the more than 1,400 high school programs in Texas). There might have been a little left in the cupboard, but when Wasson looked in the backfield it was bare as a bone, and as empty as most folks' hopes for Corsicana to make the playoffs.

They had to grow up fast to get here (thanks to Wasson's passion), and they arrived to Friday's game early, thanks to the UIL, which gave the Tigers a schedule that didn't include a bye week, just a 10-week, no break, run through the season.

After going 7-3 without a breather and 6-2 in the district race, the Tigers will get their bye next week before opening the playoffs a likely No. 3 seed. Ennis (7-0 in the district and 8-1 overall)  nailed down the district title and the top seed Friday and if Royse City (5-2 in the district with losses to Ennis and North Forney) wins its final game next week, the I-30 Bulldogs will be the No. 2 seed because of their head-to-head win over the Tigers.

Ennis had no trouble beating Royse City in Ennis and  the Lions hadn't trailed anyone over the last two months until the Tigers jumped out to a 7-0 lead on them Friday.

And when Ennis bounced right back and drove down the field, the Tigers stopped the Lions cold at the 15 after Tyler Farmer sacked Drake for a three-yard loss.

Drake, who ran for two touchdowns and threw for a big one, gave Ennis the lead on a 9-yard run with 8:56 left in the half, but Farmer (yup, the same kid who nailed the sack earlier) blocked the PAT kick and Drew Denbow picked up the ball and flew down the right sideline for a two-point Tiger conversion that knotted things at 9-9.

That's when Drake took over.

He's quick, sneaky-quick and smart, too. And he's got a strong and accurate arm -- and just like almost all coach's kids, he's got football savvy, that priceless gift football coaches wish every kid had.

He doesn't flaunt it, he just beats you with it. By the time the game was over, Drake had rushed for 129 yards, darting (there's no other word for the way this kid finds holes and scoots through them) and weaving past a Corsicana defense that stopped just about everything and everybody else.

Consider this: Drake ran for 129 yards while five other Ennis running backs, including Dyllan Santos, who led Ennis a year ago, combined to run for 128. Santos was picked by Texas Football as the district's preseason Offensive Player of the Year. But the magazine probably didn't get the memo on Drake, who will no doubt be the District 8-5A MVP when the coaches vote in a couple of weeks.

Drake broke up the 9-9-deadlock by burning the Tigers with a 59-yard TD pass to Laylon Spencer, who was double-teamed. But Spencer won the jump ball (why not, he's Ennis' best basketball player) and raced into the end zone to give the Lions a 15-9 lead with 4:06 left in the half.

Drake finished the night with a 6-for-10 statement in the air for 131 yards, but none was bigger than his jump ball TD throw to Spencer, who is closing in on 1,000 yards worth of receptions this year.

The Lions scored again before halftime, thanks to an interception that set Ennis up at the Tiger 31. Drake took off for an 18-yard gain to the 13, and two plays later Jones bullied his way into the end zone with a 3-yard TD run with 1:42 left in the half that reminded older folks of William Perry. (For Millennials, Google "Refrigerator").

One of the most critical drives of the night started the second half and ended in frustration for the Tigers, who quickly drove from their 37 to the Ennis 18, thanks to a pretty 32-yard pass from James to Fuentes.

A touchdown would have closed the gap to 23-16 and changed the dynamic of the second half, but the Lions held when James threw an incompletion on fourth-and-7 at the 15.

On first down Grant Harrison and Farmer combined to sack Drake back at the Lion 9, but Ennis rebounded with its best drive of the night.

Drake rushed for 83 yards in the second half and set the tone for the rest of the night. And it was just enough to hold off the Tigers, who cut the lead to 30-15 with 11:13 left in the fourth when James connected with Damarius Daniels, who made a diving catch and stayed in bounds as he landed in the end zone with the best reception of the night.

The Tigers scored again when James threw his third touchdown pass -- a 4-yarder in traffic to Eric Dickson with 37 seconds left to cut the lead to 30-21.  It stayed that way when a two-point conversion pass hit the turf.

James completed 22-of-37 passes for 220 yards and three touchdowns, but it wasn't enough on a night when the Tigers had trouble finding running room. Dickson ran for 62 yards on 14 carries and Daniels picked up only 22 yards on four carries against the best defense Corsicana has seen all year.

You bring back seven starters from a mean and aggressive playoff team and you're going to be good. The Ennis defense is a whole lot better than good.

Still, Farmer, who had a tremendous game, looked like the best defensive player on the field Friday. By the way, Texas Football picked him as the preseason Defensive MVP in the district.

The game was closer than just about anyone thought it would be, and Wasson's kids, who have come so far so fast, got their first taste of what the playoffs look like.

The next question is how much further can they grow in two weeks ...